Last week Automattic published its annual “Year in Review” stats, including WooCommerce stats for the first time since the company acquired Woo in 2015. As of December, there are 1,594,894 active stores using WooCommerce and roughly 1/3 of those (530,000) are new in 2016.

One of the most exciting areas of growth is WooCommerce’s global market share. Although both the Year in Review post and the WooCommerce website have the software at 39%, Builtwith stats show WooCommerce powers 42% of all online stores. This is a huge leap from 30% a year and a half ago, when it was acquired. 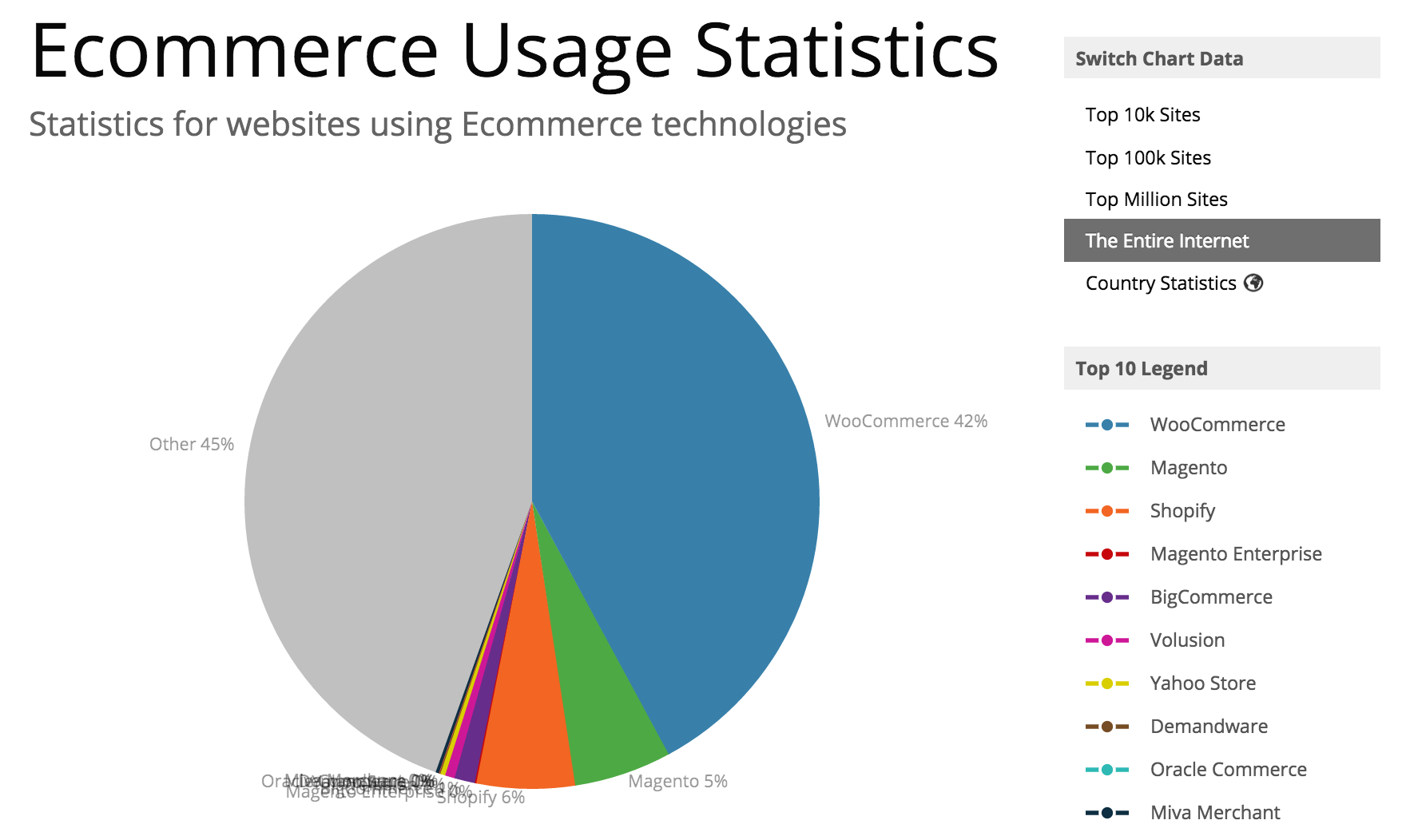 In May 2016, WooCommerce introduced WC Connect, its new Automattic-hosted SaaS architecture built on the WP REST API that makes it easier for users to add and configure store features. Real-time USPS shipping rates for US-based stores is the first of many planned hosted components. Version 2.6 introduced the new Shipping Zones feature and an updated design for account pages. In 2016, WooCommerce also released its Square integration to sync online and offline purchases and inventory.

The plan for 2017, according to the Year in Review summary, is to continue making setup and scaling easier. At WordCamp US I asked Matt Mullenweg, CEO of Automattic, what he looks for in a buying experience and how he hopes to bring that to WooCommerce.

“When I buy from an independent store online, I’m looking for it to be as friction-free as possible,” Mullenweg said. “I don’t want a lot of steps. I don’t want it to force me to register if I don’t want to. I don’t want the form to error out in weird ways – anything that breaks my trust. When I visit a website to buy something, how a site looks can increase or decrease my trust.”

WooCommerce’s official Storefront theme, which is active on more than 80,000 stores, plays an important part in shaping the buying experience for millions of customers. Mullenweg said Storefront has a lot of potential for improvement.

“With the Storefront theme there’s actually a lot we can do there to make it look like a really cool store out of the box, much like the default themes in WordPress,” Mullenweg said. “Part of the reason we change them every year is what was cool in 2012 is not cool in 2017. Fashions change, trends change. I think Woo should evolve Storefront in the same way. There’s kind of a look for independent stores right now. They’ve got a certain vibe. Let’s make it easy to do that vibe, so that you don’t have to be on Etsy or Amazon or one of the e-commerce monoliths to keep people coming to you and supporting your product.”

Mullenweg said there are features in the power packs and add-ons that could be good candidates for building into Storefront. The theme launched in 2014 and since that time has made mostly gradual improvements. The last major design improvements were released last May in version 2.0, but many store owners opt for a child theme if they want more extensive design changes to Storefront.

If WooCommerce market share continues to grow at the same rate, it could easily pass 50% of all online stores in 2017. With 53 meetups scattered across the globe – from Tokyo to Mumbai to Vancouver, the plugin is embracing the community factor that has made WordPress a success.

“I think both Jetpack and WooCommerce individually could each be bigger than WordPress.com,” Mullenweg said. “They’re both smaller than WordPress.com right now but I think each on their own could be several times larger. There are multi-billion dollar opportunities in both, so that’s what we’re working on.”