WooCommerce recently passed five million downloads, shortly before the Woo team kicked off the first WooConf earlier this month. The conference, devoted solely to WooCommerce, sold out with 300 attendees. The plugin had 294 contributors on its most recent 2.2 release and is currently being used on 18% of all e-commerce sites on the web.

Building on the global success of the plugin and its many commercial extensions, the folks at WooThemes are now branching out into selling theme extensions for the new official WooCommerce theme. Storefront landed in the WordPress Themes Directory last week and already has three commercial extensions available.

Although the theme appears to be very plain, it’s meant to be a starting place that includes deep WooCommerce integration. Storefront was designed to be lean, extensible, and an example of WooCommerce theme development standards. 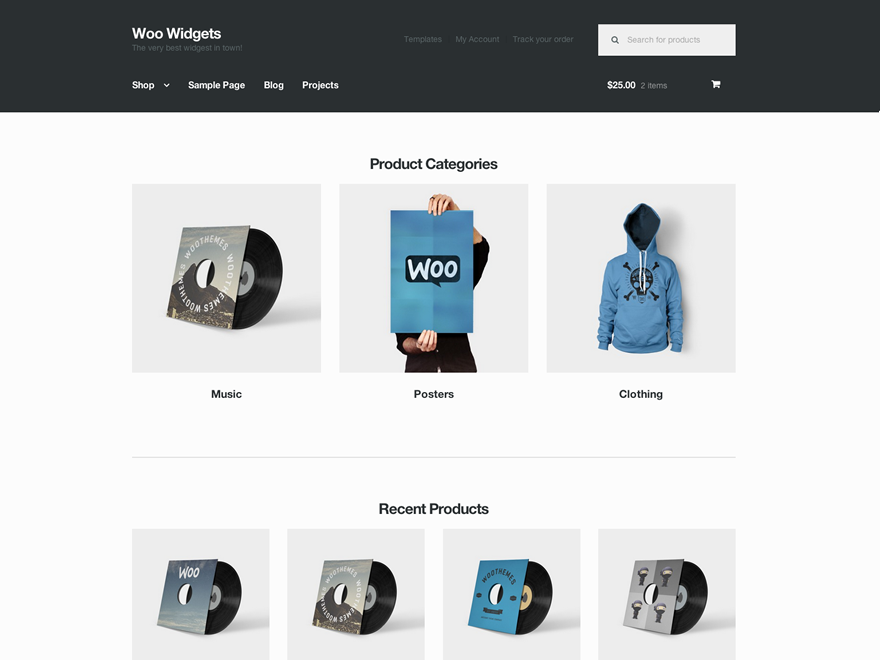 The theme does not include any sliders, shortcodes, or page builders but exists to promote a more modular approach building e-commerce sites. Instead of dumping a bunch of functionality into the theme, WooThemes opted to keep it a simple foundation for building WooCommerce projects.

That doesn’t mean that Storefront is completely bare bones. In fact, it includes an impressive array of options built into WordPress’ native customizer. Users can easily customize the background color/image, header image, footer colors (header, text, link, and background), button colors, and site layout. Storefront was built to be responsive and offers multiple widget areas for further customization, including sidebar, header, and four areas in the footer. The live demo features example products and a custom header in place.

WooThemes used the Underscores starter theme to build Storefront. Users can upload a custom logo by adding Jetpack, as the theme includes support for the new site logo feature.

Storefront also includes deep integration for WooCommerce’s most popular extensions, including the following:

Theme developers looking to build products that integrate with these extensions need look no further than the official Storefront theme. It was created to be a prime example.

The WooCommerce team built Storefront with data portability in mind, so that users will be able to easily switch themes without losing their content. That’s why they opted not to include any extra functionality in the theme, as explained in the release announcement:

By not including these features you’re free to add them via whichever plugin you prefer, and if/when you switch themes later on down the road all of those features will remain. We firmly believe that building Storefront this way means you will be less likely to need or want to switch, but at the same time wholeheartedly encourage the entrepreneurial opportunity that WooCommerce offers for theme developers far and wide.

With WooCommerce leading the WordPress e-commerce market, this theme should help to provide a standard reference for developers integrating the plugin’s features and its extensions with themes. If the popularity of the core plugin and its extensions are any indication, the launch of Storefront should accelerate the creation of new designs and ignite developers to start building new products for the theme. Check out Storefront on GitHub or download it via WordPress.org.

One response to “WooThemes Launches Storefront, A Free WordPress Theme with WooCommerce Integration”