Last week WooCommerce announced that the plugin had passed 7 million downloads and the WordPress.org plugin directory reports that it is currently in use on over a million websites.

WooCommerce is not only head of the pack when it comes to WordPress e-commerce solutions, the plugin is also the global leader among e-commerce platforms. According to recent stats from BuiltWith, WooCommerce is currently powering roughly 30% of all online stores. 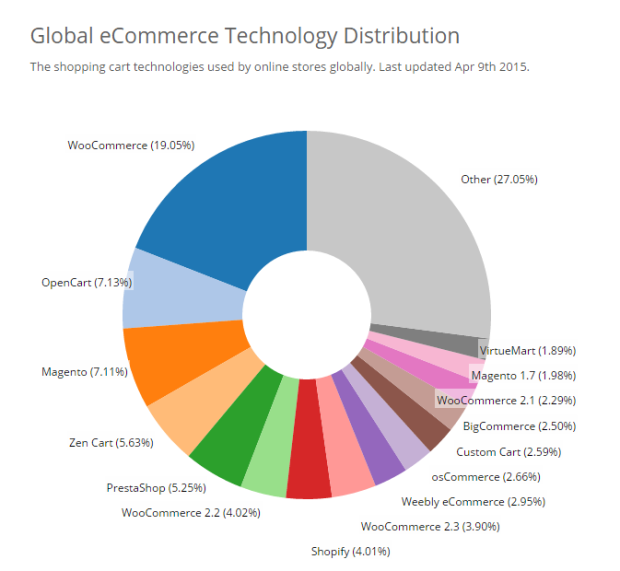 WooCommerce Accounts for 85% of Overall Sales at WooThemes

WooThemes supports the product through the sale of extensions and themes for WooCommerce. However, when WooThemes first forked Jigoshop to create the plugin, they had no idea that it would become the staple of their business.

“We saw potential, but didn’t envision such a drastic change of direction for our overall business,” WooThemes co-founder Magnus Jepson told the Tavern. “When we initially had the idea for eCommerce for WordPress, our goal was to increase our revenue by selling more eCommerce themes.

“James and Mike, our two core WooCommerce developers, came up with the extension model for WooCommerce, which was the key success to turning WooCommerce into the revenue machine that it has become today, making up around 85% of our overall sales.”

Downloads of the core plugin are on the rise from 1 million in 2013, to 4 million in August 2014, and 7 million so far this year. WooCommerce currently has 339 free and commercial extensions listed in its official directory, which is the main revenue source driving support and continual development.

“I can’t disclose our exact income unfortunately, but we do process several million dollars per year,” he said. “Our revenue has been climbing steadily over the past few years, and we are regularly breaking monthly revenue records.”

Thanks to the success of the plugin and the growth of its global community, WooThemes hosted the first WooConf in San Francisco last year. The conference was solely devoted to WooCommerce products and development.

“Our first WooConf was a huge hit, and exceeded all of our expectations,” Jepson said. “We had 320 participants join us for this amazing event, and we are planning on almost doubling the size of the second WooConf being held in Austin in November of this year.”

Global WooCommerce usage is on a steady upwards climb, and the WooThemes team plans to go after more partnerships this year.

“The future is big, and I see WooCommerce being the dominating eCommerce platform online, reaching more people through a larger distribution network (hosting providers and partners),” Jepson said. “Our goal for 2015 is ‘Strengthening Partnerships,’ and I’m sure we’ll surprise quite a few people when they see our growth.”