When Disqus announced it would be releasing new, subscription-based versions later this year, users didn’t expect to have the new advertising model injected into their sites without notice. Disqus CEO Daniel Ha said the company would release finalized pricing and provide more details well in advance of its planned March release, but users are reporting that the advertising has already been forced into their comments without warning.

Why did @disqus just add a bunch of ads to my site without my permission? https://t.co/CzXTTuGs67 pic.twitter.com/y2QbFFzM8U

“We are one of the lucky 5% who now has to pay if we don’t want really irrelevant and horribly spammy links just plopped on our site with zero warning,” BabyCenter Social Media Manager Dina Vernon Freeman said. “Unless our users (mainly millennial parents) should care about overpaying for dentures! We’re looking for other platforms ASAP.”

Brian O’Neill, who manages Slugger O’Toole, a site with more than 70,000 readers, was also hit with unwanted advertising on his site.

“Disqus has started to put ads into our comments section of our site without even telling us,” O’Neill said in a post explaining the new ads to the site’s readers. “As you can imagine I am extremely annoyed at this – I hate crappy online ads as much as you do. Supposedly we can remove the ads if we pay them $10 a month, but as yet there is no mechanism on their site to do this.” O’Neill said he is also exploring alternative commenting systems if he is unable to remove the advertising.

Disqus responded to user complaints with a post to clarify that advertising will remain optional for more than 95% of the sites on Disqus.

“Larger, commercial, sites that elect to use the free version of Disqus will be supported by configurable advertising and have the option to earn revenue through the Reveal program,” Disqus Marketing Manager Mario Paganini said. “For small, non-commercial sites, advertising will be optional. These sites will be able to use Disqus’ ads-optional subscription, free of charge.”

Publishers asked in the comments when the option to pay to remove ads will become available, as an option to pay isn’t currently in place.

“Larger sites will be able to run a paid subscription version of Disqus that includes the ability to remove ads along with additional features,” Paganini said. “We are aiming to have this available in the next couple of months. We will be making periodic updates on our blog and talking to publishers in the meantime.”

Disqus is moving to focus on its larger publishers but has already attracted angry criticism from publishers that were not properly informed of the changes. Over the years the company has experimented with different ways of monetizing the commenting platform, often frustrating users in the process of making important changes.

In 2014, Disqus began experimenting with advertising in the form of “Sponsored Comments” that users could not turn off without contacting support. This move drew criticism from WordPress co-founder Matt Mullenweg who essentially called out the ads as little more than comment spam. After a negative reaction from its community, Disqus quietly discontinued the Sponsored Comments and scrubbed the announcement post from the internet.

Disqus has struggled to land on an effective advertising model that will convince users to get on board. Its Reveal advertising program is notorious for serving low-quality ads and has inspired little confidence in users who have tried it. The following is one of the tamer examples: 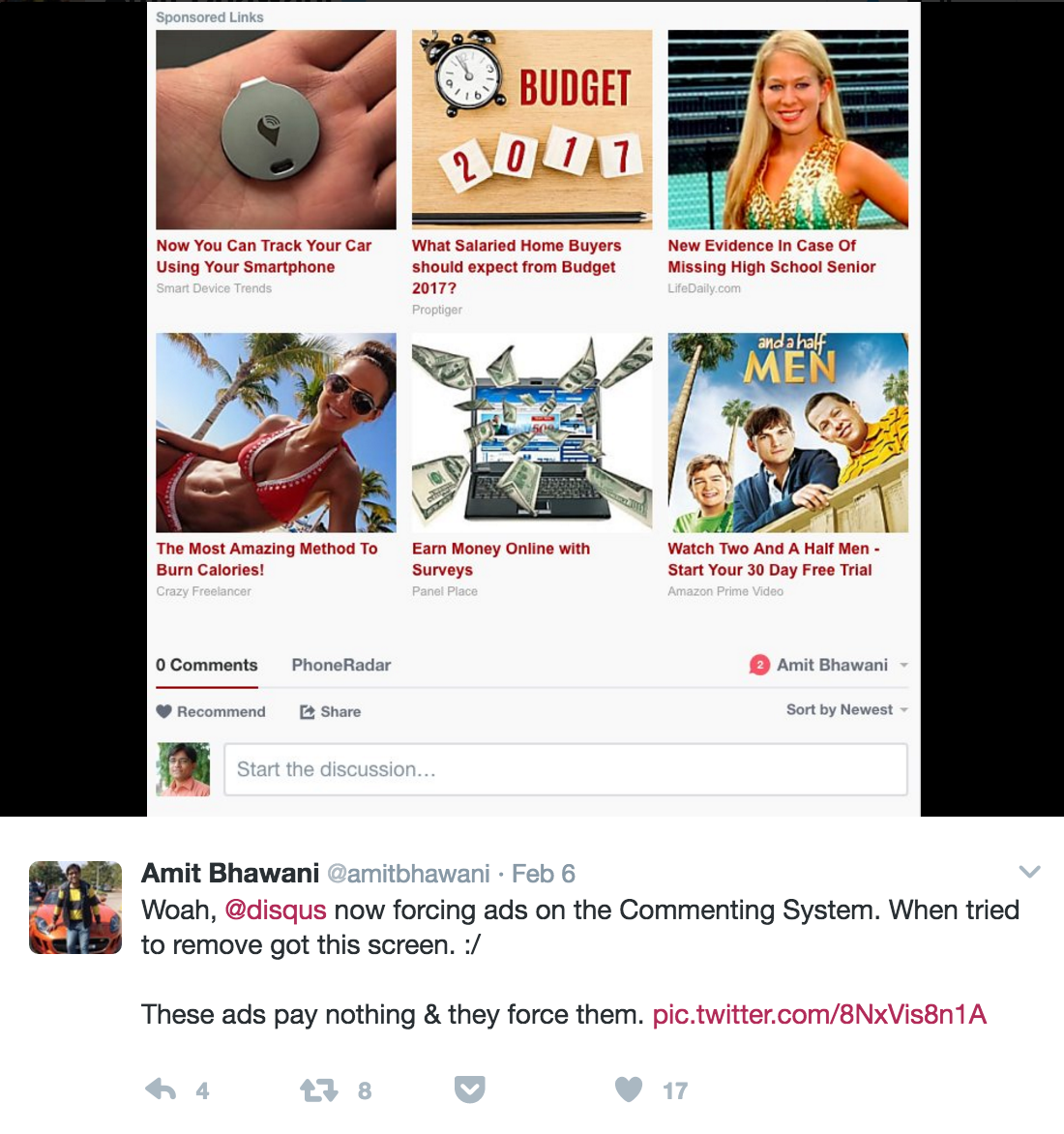 “I think if you had somewhat decent advertising you might convince people that it’s worth it, but I had to yank it from one of my sites because it was all ‘Ron Paul wants you to buy gold!’ and ’22 times the photos showed too much!’” Paul King, an author who writes for multiple publications, commented on Disqus’ most recent advertising announcement. “Just put in a tier of non-spam advertising that’s actually relevant or charge based on comments or something.”

Twitter is filled with complaints from users who are dissatisfied with the questionable quality of Disqus’ advertising. Many are searching for alternatives.

We've disabled ads straight away (they are literally ALL scams) – if you force those ads on us, we're dropping you like a hot potato

Why @disqus think it's acceptable to serve disgusting, misogynistic ads (OR ANY ADS) on people's blogs without asking is beyond me.

This recent move to turn on advertising without publishers’ permission is another communication blunder in the same vein as the previous attempt at Sponsored Comments. Disqus has failed to find a communication strategy that respects users’ content while leading the company towards its goals at the same time. With spam-quality ads deploying network-wide, the company can certainly expect that some users will be willing to pay the $10/month to turn them off. Sadly, the experience of paying to turn off offensive ads feels more like getting mugged on your way to work than upgrading your service.

The Disqus Comment System plugin has been hovering around 200,000 active sites for the past two years and its ratings continue to plummet on WordPress.org. Unless Disqus is able to dramatically improve its advertising network before its official March release, we may see a mass exodus to other commenting systems.