Google released version 1.2 of its official AMP plugin for WordPress ahead of WordCamp Europe in Berlin. This release introduces a new AMP Stories editor that is powered by Gutenberg. 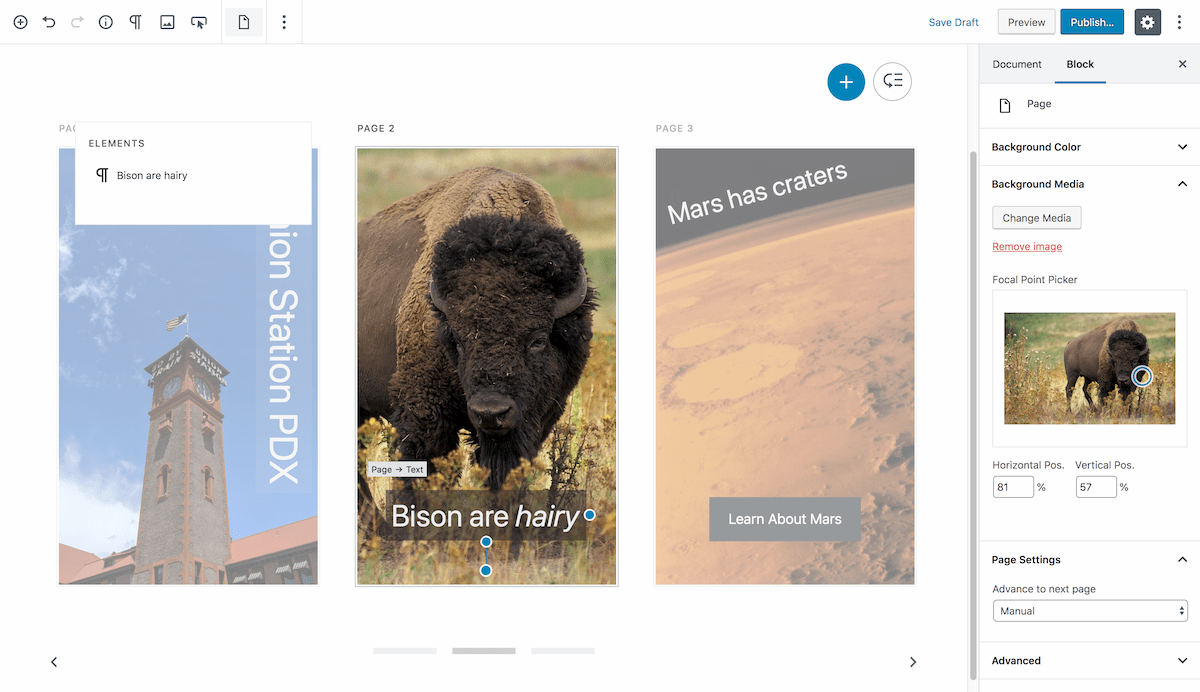 AMP Stories are separate from the capabilities that enable AMP for the rest of the website, and they can be used together or independently. The Stories feature has its own post type that uses the block editor and comes with custom blocks that enable the following:

The stories created in the editor can also be embedded in other posts and pages using the regular embed block or the Latest Stories block.

Stories are a mobile-focused format that have become increasingly popular with social networking apps like Snapchat, Instagram, and Facebook. Stories on these platforms are usually created as ephemeral bits of content that are not easy to embed without using a third-party application. Google is marketing AMP stories as “visual storytelling for the open web.”

“I like to position it as Web Stories,” Google Developer Relations Program Manager Thierry Muller said. “It is powered by AMP, but there are none of the challenges developers might face when making a website AMP compatible. With Web Stories, users are now able to create stories accessible via a simple URL, content that they own and can use open source tools such as the Story editor for WordPress to create stories.”

Muller said the target audience for AMP stories includes publishers, travel bloggers, food bloggers, and anyone who wants to create immersive content. Some well-known publishers, such as The Telegraph, Washington Post, and CNN, have partnered with Google as early adopters, using AMP stories to cover news and events. The Stories also show up in a carousel in mobile search results.

WordPress users who want to start using the AMP plugin’s Stories feature will need to have Gutenberg 5.8+ installed, because it requires some of the newer features in the block editor that haven’t yet be merged into core.

The addition of AMP Stories to the official AMP plugin may make it more appealing to those who have been hesitant to install it simply for the website capabilities. It gives the plugin another entry point with users who are more interested in the visual storytelling aspect.

In a recent post examining the web standards community’s confusion surrounding how Google Chrome seemed to be unilaterally implementing a new element called toast, Jeremy Keith made a good observation regarding developers’ skepticism about AMP.

“I certainly don’t think this is a good look for Google given the debacle of AMP’s ‘my way or the highway’ rollout,” Keith said. “I know that’s a completely different team, but the external perception of Google amongst developers has been damaged by the AMP project’s anti-competitive abuse of Google’s power in search.” Google Web Advocate Das Surma lent credibility to Keith’s take on the matter, saying it offered “a pretty accurate representation of our intentions, but also of the problems and mistakes we made.”

It’s not easy to quantitatively measure how developers’ anti-AMP sentiment has affected the adoption of Google’s official AMP plugin for WordPress, especially given the rocky start it had in the official plugin directory. XWP and Google engineers had a lot to overcome after taking over the plugin’s development from Automattic when users began to wonder if it had been abandoned.

The first version of the AMP plugin was released in October 2015 and initially had 400 active installs. Over the past four years, that number has grown to more than 400,000 active installs. The plugin has had a 33% increase in its user base from December 1, 2018 (300,000+) to today (400,00+). This is likely due to some of the more user-friendly improvements that have been introduced in the past six months. Google and XWP’s involvement seems to have successfully dug the plugin out of its previous trend towards negative ratings from users who couldn’t get any support.

Nevertheless, Google is still struggling with the challenge to convince WordPress users that the AMP plugin is a must-have addition to their sites. Convincing the wider WordPress ecosystem to build AMP-ready plugins and themes that provide the compatibility for functionality that users’ websites rely on in order to be anything more than a basic blog. Adding AMP stories to the plugin may help to get more WordPress users on board to further explore AMPing up their websites.

Approximately 410/500 issues and pull requests in version 1.2 were dedicated to the new AMP Stories feature. This release introduces the notion of “AMP experiences,” a fancy industry buzz word that divides the Stories and Website features into separate functionality. The website framework improvements include a renaming of the template modes: Native, Paired, and Classic are now Standard, Transitional, and Reader, a strategic and notably less clear way of identifying the modes that seems intended to drive users towards adopting the native AMP approach. The editor has also been updated to display a warning when a featured image is too small for Google Search’s requirements, as well as provide better block-level warnings and improvements to validation requests.

Check out the v1.2 changelog for a full list of everything that is new in this release.