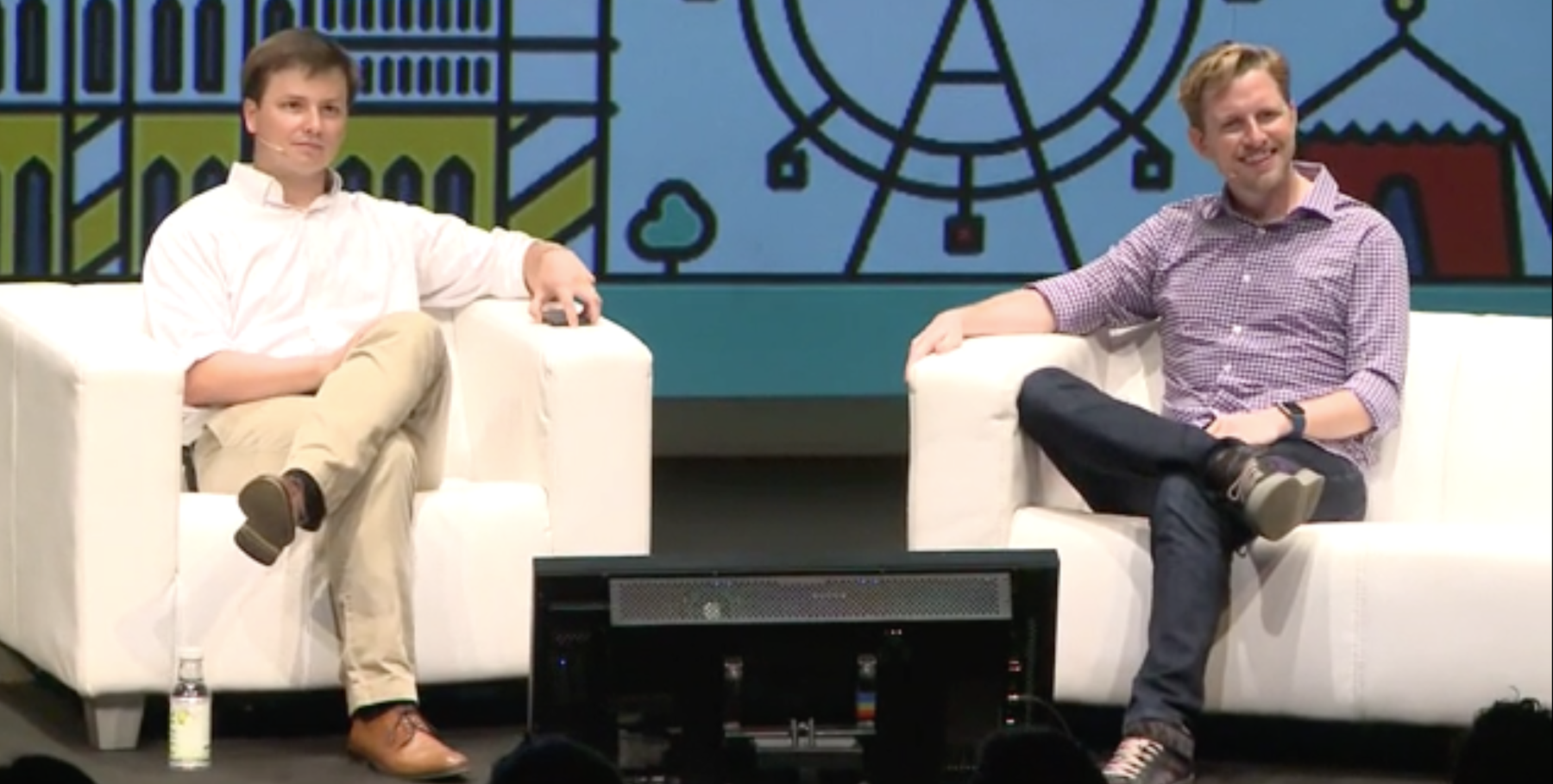 During the first day of WordCamp Europe, Brian Krogsgard interviewed Matt Mullenweg on stage before his Q&A session with the audience. Mullenweg opened up about his multi-decade vision for WordPress and spoke frankly about some of WordPress’ competitors that are spending hundreds of millions of dollars in advertising. Here are a few of the highlights.

Mullenweg Reiterates that JavaScript-Powered Interfaces are the Future of WordPress

Automattic, which recently passed 11 years in business, has grown to more than 470 people in 50 countries. After Mullenweg took on the role of CEO at the beginning of 2014, the company raised an additional $160M in funding and began work on Calypso, WordPress.com’s JavaScript-powered application. When asked about Calypso’s impact on helping users stick with their blogs, Mullenweg shared his thoughts and vision for reducing the friction for publishing online:

To truly achieve our mission of democratizing publishing we have to think about every single aspect of it – from what do people find when they search YouTube for WordPress to is it available in the language that they speak natively, which we’ve made huge strides in, in the last year. It’s incredibly challenging, because when you think about the entire experience of someone having an idea or problem and WordPress being the medium through which they are able to solve that, whether that’s publishing, selling something online, making a brochure website, blogging, sharing their story, any of these things – WordPress is a means to an end. The more we can lower the friction, the better.

To this end, Mullenweg encouraged WordPress developers to “Learn JavaScript, deeply,” during his 2015 State of the Word address and even pledged to contribute a JavaScript patch to core in 2016. At WordCamp Europe he said he’s working towards a first goal of getting a commit into Calypso, which is also open source.

I think that some people may have thought when I said, ‘Learn JavaScript, deeply,’ that was something that would happen in the next year or two. When I think of WordPress, I think in decades. Over the next five years, every developer in this room is going to need to learn JavaScript deeply. The thing that people interact with is going to be more of an application model than a document model. A bunch of .php files we have in wp-admin is just not going to be how most people interact or publish. What that looks like, beyond that, we need to figure out and we need to create.

Why Medium is Not a Threat to WordPress

Krogsgard asked Mullenweg what kind of threat Medium or similar tools could pose, citing a recent NiemanLab article about five publishers that transitioned their sites to Medium.

Mullenweg attributes much of WordPress’ success to its flexibility and the community, including plugins, themes, developers, and users. “Those are the two things that WordPress has done over the past decade better than everyone out there, which is why our marketshare has grown commensurately,” he said.

When asked if WordPress has a better publishing experience than Medium, Mullenweg replied, “Without a doubt, absolutely.” He also noted that while many high-end WordPress customers pay tens of thousands of dollars to use WordPress, Medium is currently paying high profile publishers to use its platform. Aside from its ugly permalinks and inability to export followers, Mullenweg said Medium’s biggest drawback is its lack of customizability and an uncertain future:

Medium has an amazing WYSIWYG and great editor. However, there are no themes. Your site looks generic like every other one on there. In Mark’s post he has a screenshot of the Ringer where all you can tell that it’s the Ringer is this little ‘R’ in the top left. The rest is a signup button for Medium and a follow button that requires you to sign up for Medium. They essentially have outsourced the entire future of their business in many ways to this platform which does not have a business model and is not certain how they’re going to monetize it, if they’re going to monetize it, and what effect that will have on both their readers and publishers.

The cost of using a platform like Medium, Mullenweg said, is that publishers trade freedom for convenience. WordPress, on the other hand, allows publishers to “be in control of their own digital destiny,” he said. Media companies in particular have the unique challenge of not being eclipsed by social media aggregators.

As Medium struggles to find its footing and convince publishers to use its platform, Mullenweg sees Tumblr as a more fitting competitor to WordPress.

Tumblr, from a publishing point of view, is still the best competitor we’ve had in the past five years. Even Tumblr under Yahoo in its decline since the day it sold, is still 80-100 times bigger than Medium, which is now five years old…I think that they have really nailed something with their tool. I was very sad when they sold, because we lost a very good competitor. I think that we probably still have more to learn, even from the old Tumblr.

In the second half of the hour-long interview and Q&A, Mullenweg discusses more topics including Automattic’s biggest revenue sources, the status of the WP REST API project, and how WordPress can be a leader in shifting the web to be more open. The recording is now available on WordPress.tv and embedded below: