State of the Word 2015: JavaScript and API-driven Interfaces Are the Future of WordPress 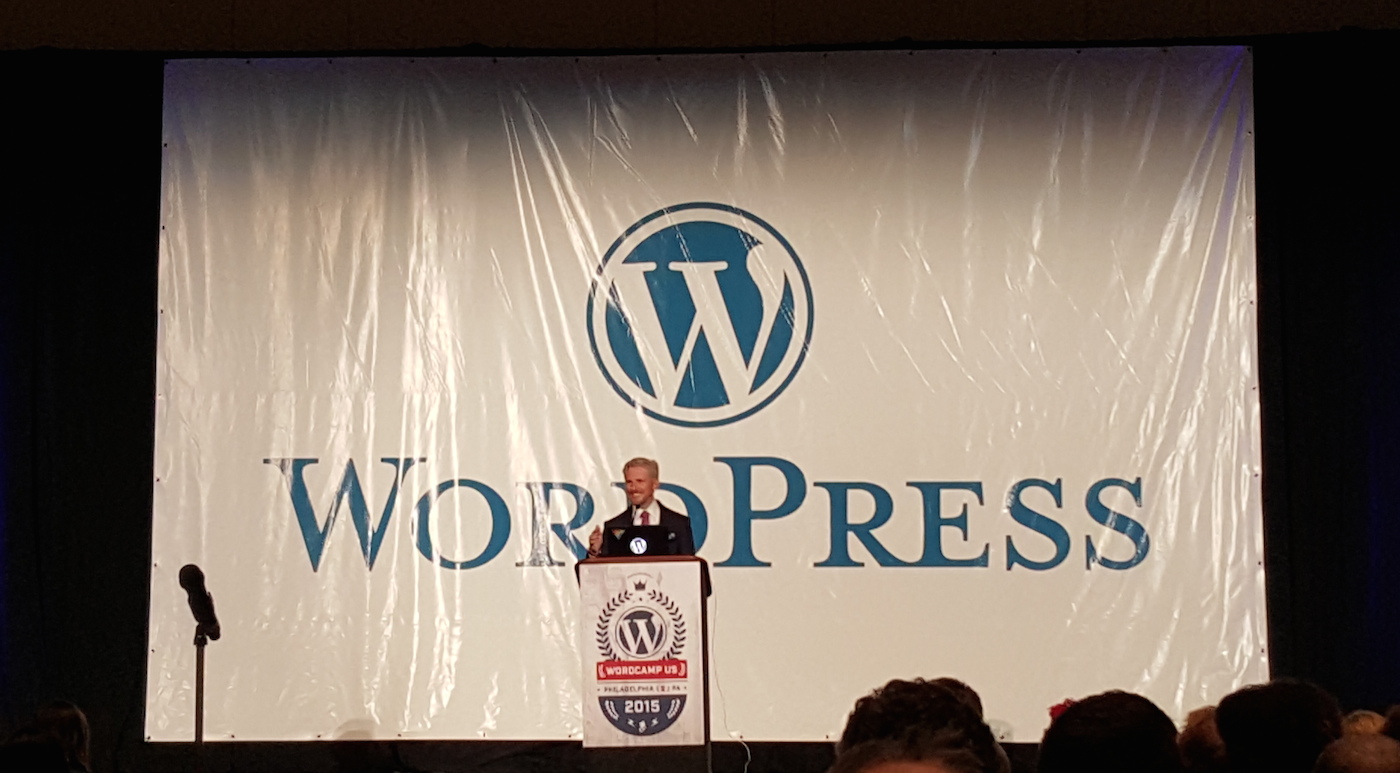 The inaugural WordCamp US was held this weekend at the Pennsylvania Convention Center in the heart of Philadelphia, one of America’s oldest cities. Roughly 1,800 WordPress enthusiasts came from all corners of the world to attend the event.

Ambling down Philly’s historic streets, lined with Benjamin Franklin monuments, one cannot help but consider how far publishing has come since the days when each letter was laboriously placed to form documents with copies cranked out one at a time.

Francis Bacon equated the power of the pen to that of gunpowder when he identified printing as one of three inventions that changed the world – “so much that no empire, no sect, no star seems to have exerted greater power and influence in human affairs.”

WordPress has played a major part in making publishing available to everyone in the digital age, an important reason why the project’s influence continues to grow more than a decade later.

Matt Mullenweg delivered his 10th annual State of the Word address to the largest WordCamp crowd to date. In reviewing stats from 2015 he highlighted the fact that WordPress now powers 25% of the web.

“This is a not a chance to rest on our laurels,” he said. “[pullquote]It’s a demonstration that the world wants a free, open source solution for the web.[/pullquote]”

Mullenweg shared 2015 stats that show the community behind WordPress is growing in tandem with its global usage:

JavaScript Interfaces and PHP APIs are the Future of WordPress

Mullenweg’s address focused heavily on the the opportunities that the WP REST API is opening up for JavaScript-powered applications to run on top of WordPress. He highlighted four examples, including Microsoft Dynamics AX, Nomadbase.io, StoryCorps, and WordPress.com’s new architecture codenamed Calypso.

“They say that the best way to predict the future is to create it,” he said. This was the motivation behind the Calypso project, which answers the question: “What would it look like if we designed WP admin completely from scratch?”

Calypso is 100% JavaScript leveraging React, a totally new technology stack for Mullenweg’s collection of world class PHP-only developers. They all learned JavaScript in order to create a completely new approach to architecting WordPress.com.

“[pullquote]I believe quite strongly that JavaScript and API-driven interfaces are the future of not just WordPress but the web[/pullquote],” Mullenweg said. “Perhaps there could be a future where there might be something on the other side that is worth breaking backwards compatibility for.”

Despite this new push for JavaScript, Mullenweg emphasized that PHP is not going away. “So much of the success of WordPress is due to the technologies it was built on,” he said.

While new versions of PHP historically haven’t provided compelling reasons for people to upgrade, Mullenweg said that PHP7 changes all of that since it’s twice as fast as its predecessors. This means that a good chunk of the web will soon be doubling in speed.

WordPress as an Advocate of the Open Web

Mullenweg reaffirmed his strong belief in an open web during his address. As WordPress becomes more JavaScript and API-driven, the platform is better positioned to be a strong advocate of open web principles in terms of publishing access and formats, freedoms, interoperability of open APIs, and device access.

“In some ways we are at a nadir of the open web,” Mullenweg said, noting that big players like Twitter have APIs that are getting more closed off. WordPress stands as a beacon in a sea of threats to digital freedom with its commitment to open APIs that work together.

“An API is the key of an open web,” he said. “[pullquote]WordPress can and will reverse the trend of closed APIs[/pullquote]. We’re one of the few platforms out there where it can be open in every layer of the stack.”

WordPress.org contributors will continue working on getting the top plugins and themes available in every language, which Mullenweg considers to be an “incredible opportunity to democratize the web.”

He also noted that WordPress is still weak on customization. The project will need all hands on deck to move this feature forward in 2016.

“[pullquote]Customization is the single biggest opportunity for improving the WordPress experience[/pullquote],” he said.

He emphasized that JavaScript is not only the future of WordPress but it’s also the future of the web. “It’s what’s going to allow WordPress to thrive for the next 13 years,” he said.

Mullenweg said that he hopes WordPress developers will be inspired to become world-class JavaScript developers comparable to those in any other JS-powered open source project. A year of learning is ahead. Many developers will become reacquainted with what it feels like to be a beginner, including Mullenweg himself who pledged to contribute a JavaScript patch to core in 2016.

“When WordPress launched, the biggest criticism is that the world already had too many blogging systems,” Mullenweg said. But the world didn’t yet have a blogging platform with the same philosophical underpinnings that early WordPress contributors embraced.

A commitment to freedom and openness is WordPress’ true north, and it’s the reason the platform continues to dominate in 2015. Throughout its evolution as a blogging system to a full CMS, and now an application platform, WordPress continues to evolve towards being more open.

“I think we can use this opening up, API-driven development to actually open up more of the web,” Mullenweg said. “We have a very exciting year ahead of us making the web a more open place.”

37 responses to “State of the Word 2015: JavaScript and API-driven Interfaces Are the Future of WordPress”