Early Reviews Show Applications Like Calypso Are the Future of WordPress 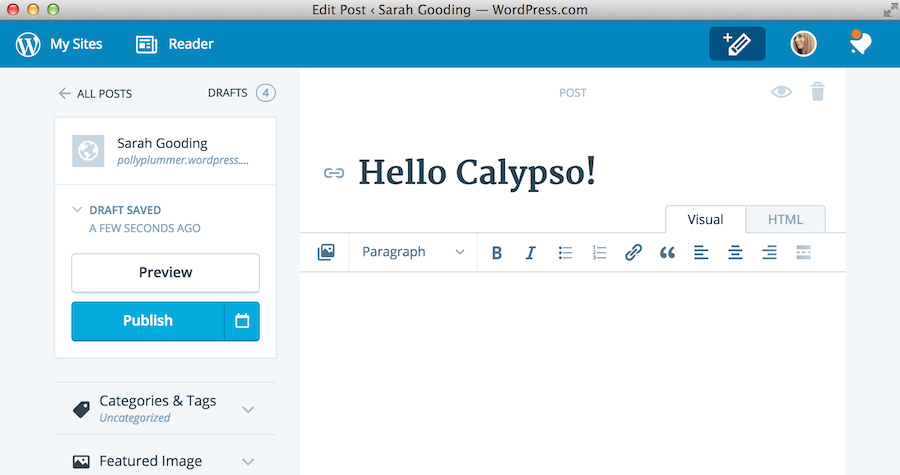 Last week Automattic unveiled Project Calypso, a brand new architecture for WordPress.com and a Mac app that mirrors the experience on desktop. The overhaul was nearly two years in the making, a risky bet for Automattic but one that shows a glimpse of what the future of WordPress could be.

The new JavaScript and REST API-powered WordPress.com technologically pivots the platform into a lithe modern publishing engine while shedding 10 years of legacy code in the process. It’s easy to see why Calypso has so far received glowing reviews from news outlets around the web. The giant technological leap forward results in a publishing experience that is a night-and-day difference when it comes to page loads, content previewing, and real-time updating.

In an interview with VentureBeat, Matt Mullenweg answers a burning question that the community wants to know – What does Calypso mean for WordPress core? Will core adopt a similar technology stack? Mullenweg sees Calypso as just one example of what is possible with WordPress.

So I think what might happen is that the technology that drives the server side of WordPress and what drives the client side can diverge. Again, this is really up to the community, so we’ll see where it takes us. This thing we released has only been out there one day. Maybe someone will make something much better?

WordPress.com’s new architecture isn’t the first case of “headless WordPress,” though it is one of the most prominent and easiest examples for users to demo. Many other WordPress-powered sites have already adopted an approach that decouples the interface using the new WP REST API. Apps like StoryCorps, Nomadbase, the New York Times, and the Wired.com liveblog are a few early pioneers using the API to deliver content.

Another example offered in the comments on the WordPress.com developer blog cites ustwo.com (the makers of Monument Valley, Dice, and other popular apps) as using a similar setup. The site is a React.js single-page application that serves WordPress content via the WP REST API using custom endpoints. Like WordPress.com, the code for this site is also open source on GitHub.

Despite the risk of sharing the large innovative codebase with competitors, Automattic opted to keep Calypso open and available for anyone in the WordPress community to learn from and build upon.

“A lot of people thought we should keep this proprietary, but throughout my life I’ve learned that the more you give away, the more you get back,” Mullenweg said in his announcement.

Within the first 24 hours the repo was already trending on GitHub, with developers eagerly reviewing the code. ManageWP, a competitor to Jetpack Manage, praised Calypso as an important tool to help drive up WordPress marketshare and move the platform forward:

That’s the beauty of WordPress – the Foundation is not looking to put us under Automattic’s thumb; Matt and his team are actively encouraging the WordPress community, through open source policy, to keep building, innovating, making lives easier for everyone, and find their own place in the ecosystem.

Automattic’s commitment to open sourcing its code demonstrates that any innovations they release are not designed to eclipse competitors’ efforts but rather to add to the shared knowledge bank that drives WordPress improvements.

Mullenweg, in a roundup of press on Calypso, brings it back to the core value of democratizing publishing.

“At the end of the day, it’s not about technology for technology’s sake, it’s about technology at the service of human voices,” he said. “Embracing change to support the free, open web where everyone has a voice.”

Calypso is one of the best new examples of having WordPress your way. It demonstrates the flexibility of using a REST API to run any kind of JavaScript application on top of WordPress while maintaining the use of its world class CMS features. Greater architectural freedom for developers means more compelling publishing experiences for users. The success of the open source Calypso project will likely pave the way for many more JavaScript and REST API-powered WordPress sites and desktop applications.