WordPress.com came under fire this week for hosting a site with conspiracy theories claiming the Sandy Hook Elementary School shooting was a hoax. The New York Times published an article titled “This Company Keeps Lies About Sandy Hook on the Web,” setting off a hailstorm of angry posts on social media that demanded Automattic take action.

“Posting conspiracy theories or untrue content is not banned from WordPress.com, and unfortunately this is one of those situations,” Automattic told the New York Times in a statement. “It is a truly awful situation, and we are sympathetic to the Pozner family.”

Leonard Pozner, father of Sandy Hook Elementary shooting victim Noah Pozner, claims that images of his son were being misused on a WordPress.com-hosted site where the author denied the tragedy and called his son a crisis actor. He filed copyright infringement claims on the images used on the conspiracy site in an attempt to get the content removed.

Automattic examined the images and determined that there was nothing illegal about their use on the site. The company sent Pozner a reply that said, “because we believe this to be fair use of the material, we will not be removing it at this time.”

In the New York Times article, Automattic admits its insensitivity in handling the situation, apologizing to the family, but said the posts in question “are not violating any current user guidelines, or copyright law.”

“The pain that the family has suffered is very real and if tied to the contents of sites we host, we want to have policies to address that,” Automattic told the New York Times.

After consulting with the Internet Archive’s Wayback Machine, it appears WordPress.com has quietly updated its privacy policy, which now includes unauthorized images of minors on the list of things the platform considers private information. The previous policy appears below: 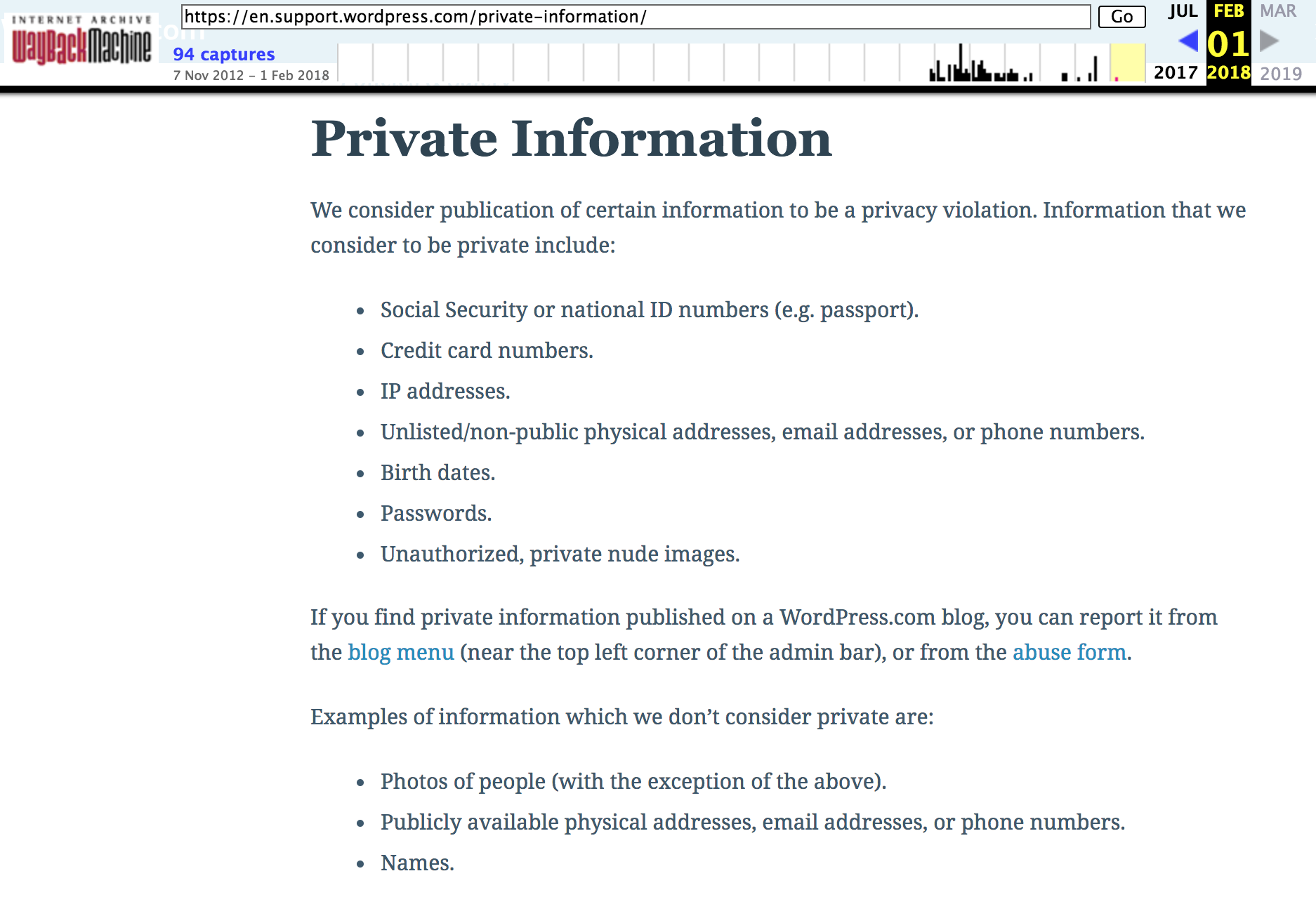 Minutes ago this morning, I discovered that WordPress has unilaterally and without warning shut down Fellowship of the Minds for alleged violations of "Terms of Service". I will explore finding another server for FOTM. Please pray for America.

WordPress just suspended my interim blog The Fundamental Option as well. That blog has been active for only the past 2 days, so what possible "terms of service" could have have violated? It's war, folks. America is entering into very dark days. Be prepared.

The site in question (fellowshipofminds.com) appears to have been removed, along with an interim site the author created following the first suspension. A number of other related sites have also recently been removed. These events are outlined in a post on memoryholeblog.org, a site maintained by James F. Tracy, a former professor of journalism and media who became known for his research questioning the Sandy Hook Elementary School massacre and Boston Marathon bombing. Tracy’s blog was also removed from WordPress.com in 2016 for violation of Automattic’s Terms of Service.

Automattic did not detail specific infractions in either case of removal. It’s not clear whether the site referenced in the New York Times article was removed for a new offense or a previous one. The removals seem to have coincided with WordPress.com’s updated privacy policy, but Automattic’s PR department has not responded to a request for comment on the matter.

“As with Automattic’s treatment of MHB, FOTM’s disappearance strongly suggests how WordPress.com’s policies are being tailored to placate outside parties whose foremost interest is in stifling political speech on potential high crimes, and how in this instance such poorly-founded grounds for censorship have triumphed over free speech,” Tracy said.

Historically, Automattic has been a stalwart defender of free speech on the web. It’s outlined as part of the WordPress.com’s User Guidelines:

WordPress.com strongly believes in freedom of speech. We have a vast audience spread across many cultures, countries and backgrounds with varying values and our service is designed to let users freely express any ideas and opinions without us censoring or endorsing them.

It’s not clear whether Automattic changed its policy in response to this situation or whether this situation revealed holes in it that the company wanted to improve. In either case, the policy change seems to have enabled Automattic to do what outraged onlookers wanted them to do, except outside of the emotional mandate issued by the New York Times.

Without the new privacy policy in place, removal of a site based on offensive material constitutes censorship. Automattic had already determined that the post using the child’s image, while distasteful and offensive, was fair use for the material. The image had likely already been used thousands of times by news organizations with a different narrative attached to it that is more in alignment with the majority’s view of the tragedy.

As it is a private company, Automattic’s terms of service do not have to reflect the full freedom of speech allowed by the law. However, the company has always upheld its reputation in the past as an uncompromising defender of its users when presented with requests for censorship.

In a recent post on Techdirt, Automattic general counsel Paul Sieminski and Holly Hogan detail how WordPress.com handles its role in managing intermediary liability when the company receives complaints regarding defamatory content:

Making online hosts and other intermediaries like WordPress.com liable for the allegedly defamatory content posted by users is often criticized for burdening hosts and stifling innovation. But intermediary liability isn’t just bad for online hosts. It’s also terrible for online speech. The looming possibility of writing a large check incentivizes hosts like Automattic to do one thing when we first receive a complaint about content: Remove it. That decision may legally protect the host, but it doesn’t protect users or their online speech.

That article explains the level of nuance involved in handling complaints and the costs associated with protecting its users’ freedom of speech. Automattic’s counsel concludes with an observation that “leaving such important decisions to the discretion of Internet hosts is misplaced and tilts the balance in favor of silencing often legitimate voices.”

WordPress.com is a Host for Websites, Not a Social Media Silo

WordPress.com’s platform is distinct from social networks in that it is not a social media silo. It acts more as a host and cannot have one-off shutdowns of sites anytime there is a public outcry.

“WordPress.com is much closer to being a common carrier than Facebook and other social media,” Dan Kennedy, associate professor at Northeastern University’s school of Journalism, said in response to the NYT article. “That difference really doesn’t get highlighted here.”

Self-hosted WordPress (.org) user and data journalist Matt Stiles also commented on the distinction, and followed up with me privately, identifying WordPress.com as “a free-speech sidewalk for the Internet.”

“WordPress.com needs to make clear to the public that it’s a host, not a place that controls — through algorithms or other curation, and revenue — content,” Stiles said. “I am NOT a supporter of sites like this. I just want WordPress to thrive as an open-source tool and as an important paid host for web sites. I’m also worried about WordPress.com having to make arbitrary decisions about content. It’s tough to define hate speech. We know it when we see it, but I worry about censorship on private platforms.”

Dave Winer also commented that the article failed to capture the distinction of WordPress.com as a host for websites:

WordPress.com isn’t like the others, it isn’t a silo, so banning him from that service will not necessarily have any affect on the presence of his site. He will be able to export his site, set up his own server, point the DNS entry at that server, and proceed on the open web and it will appear to outside viewers as if nothing happened. This will be the end of the discussion, unless the anti-speech advocates try to exert pressure on the open web. There they will find there is no CEO, no corporate headquarters, no shareholders afraid of losing value, none of the usual pressure points.

This particular situation regarding the Sandy Hook conspiracy site seems to have hit a nerve due to the fact that there are children involved. Despite WordPress.com’s quick privacy policy change in this instance, Automattic is still a rare outlier among publishing companies when it comes to support of free speech on the web. Media outlets and tech companies are increasingly clamoring for offensive content to be removed, instead of taking a principled stand against censorship.

Today more than 200 newspapers, including the New York Times, are coordinating to publish editorials calling out President Trump’s characterization of the press as the “enemy of the people.” Corporate-owned news media is ready to decry attacks on free speech, but do they really believe in it when it counts? That freedom isn’t predicated on whether the speech is true or unoffensive to readers.

Calling out a free speech platform like WordPress.com, without any distinction for its vital role in enabling journalists across the globe, is a coercive attempt to exact a desired result. What WordPress.com has done is groundbreaking in democratizing publishing and enabling bloggers to break news on their own sites.

The New York Times raking WordPress.com over the coals for its refusal to censor its users is an egregious double standard. A publication cannot call for free speech for itself while eating up the rights of everyone else they don’t agree with. Principles aren’t principles if they only serve you when they are convenient.

Forcing the censorship of offensive speech may feel like swift justice in the short term, but it weakens the fabric of a free society. Let discerning readers make up their own minds when they come across sites disseminating conspiracy theories. Although it may be an unpopular stance, the tragic nature of this particular offense cannot bypass the principles that underpin our basic freedoms.