Press75, established by Jason Schuller in 2008, is one of the longest running successful WordPress theme shops. Schuller carved out his own niche creating video-centric WordPress themes and created a strong, well-respected brand. He gradually became more involved with creating Dropplets, an alternative publishing platform, and experimenting with Leeflets, and his Cinematico project.

In April, Schuller decided to put Press75 up for auction on Flippa, where the site pulled in bids as high as $45,000. He announced today that Press75 has been acquired by Westwerk, parent company of WerkPress, a WordPress design and development agency. 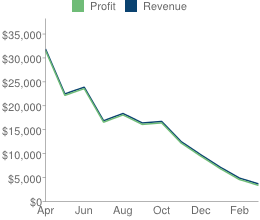 Although Westwerk is not at liberty to disclose the final sale price of Press75, the site’s revenue was public on Flippa. At one time, Press75 brought in more than $30,000 per month but had experienced a sharp decline over the past year.

I spoke with Amy Abt, account executive at WerkPress, who said that their team will be working to bring the site’s revenue back up from the current $5k/month where it plateaued:

The site’s revenue had declined in recent months, as Jason began transitioning his focus to other projects. As of recent, average monthly revenue hovered around $5K. We are looking forward to bringing this up to historical averages and beyond!

Abt said that they will not attempt to rebrand Press75 and noted that the site already sports a mint green color palette similar to its new parent company, Westwerk.

What’s Next for Press75?

“We will be focusing on a couple themes that are in the WordPress.com pipeline, and then shifting gears to updating a few older themes, and releasing new themes (and plugins) as well,” Abt said. “We’re shooting to have an update available by next month.”

Press75 has a number of old, outdated themes among its collection, but Abt said the team hopes to revive them and create some more modern themes to add. “There are several that will remain archived,” she said. “However, we’d like to update and maintain as many relevant themes as possible, as well as release new themes, including several more responsive options.”

Current Press75 subscribers will be glad to know that WerkPress has transitioned a couple lead developers to help with the immediate theme updates. In the future, they plan to add a dedicated support team (in addition to implementing community-based forums).

It’s a bittersweet day in the history of commercial theme shops as Schuller officially makes his exit by handing over the keys to Press75’s new owners. Press75 came on the scene in the very early days around the same time as StudioPress, WooThemes and iThemes. In a recent interview with the Tavern, Schuller shared with us his growing dissatisfaction with trying to make WordPress do what he wanted and needed.

“WordPress was a great stepping stone for getting started as an entrepreneur,” he said. “But I just know in my gut that in order to move forward I need to go and experiment on my own.”

Press75 is now in the hands of passionate people who will bring new energy to the site and its products. The folks at WestWerk believe strongly in the WordPress platform and plan to work diligently to make Press75 a successful product channel.

3 responses to “Press75 Acquired by Westwerk for Undisclosed Amount”