The team behind Postmatic is aiming to breathe new life into WordPress native comments with the 1.0 release of Epoch today. The plugin was created to provide a Disqus alternative with faster loading and submitting for comments.

Epoch’s creators set an ambitious goal for themselves on the plugin’s description page:

The plugin submits comments via AJAX, which means that comments appear instantly within the conversation without refreshing the page. The experience is designed to be so fast that it blurs the line between commenting and chatting, as comments from other readers also show up automatically with the same speed. The video below shows the plugin in action and a live demo of Epoch is available on the Postmatic website.

Epoch version 1.0 boasts compatibility with virtually any WordPress theme. The plugin will attempt to integrate with your theme via one of three ways: 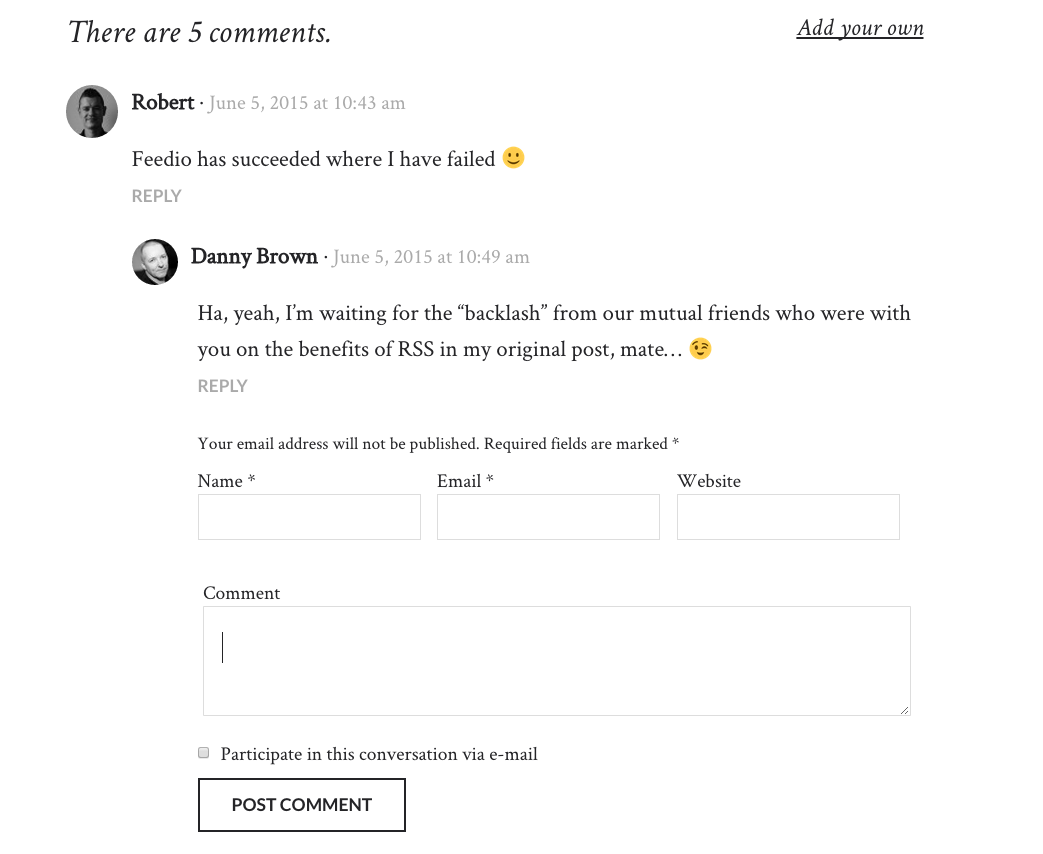 Unlike Postmatic, which has a commercial option for additional features, founder Jason Lemieux says Epoch will not be directly monetized.

“We do not have any plans to create a commercial version,” he said. “Postmatic is our primary product, Epoch exists only to make it easier for people to move back to native commenting, and in turn to use Postmatic. Epoch will be free forever.”

Epoch works seamlessly with Postmatic, i.e. it will pop up an opt-in modal allowing the commenter to subscribe to new post notifications. Using Postmatic in combination with Epoch is not required, because the plugin was created to work well on its own. It’s also compatible with many other plugins that extend comments.

“Other third party native commenting plugins have taken a heavy-handed approach and do not support the comment template hooks built into WordPress,” Lemieux said. “This creates a walled garden in which the innovation and hard work present in existing and future comment plugins is left out.

“We decided to take a different approach. We built Epoch to be compatible with other comment plugins as much as possible. Not all are, but with little tweaks here and there they work just fine.”

“In our testing most anything that does not use a lot of JavaScript works just fine,” Lemieux said. “Things I haven’t tested but I assume would work would be anything that modifies or adds fields to the comment form (Subscribe to Comments, CommentLuv, various captchas).

“Fancier plugins that allow for comment editing or sorting the comment order based on voting would probably not be happy. We will have to make that functionality ourselves.”

Epoch is a Disqus Alternative with an Emphasis on Privacy

When Lemieux and his team created Epoch, the strategy was to address problems with native commenting in order to pave the way for more users to get on board with Postmatic.

“We didn’t set out with intentions of competing with Disqus,” he said. “However, a few months in it became clear that there are usually two reasons people were not using native comments, and we would need to address both if we wanted widespread adoption of Postmatic.

“The first is that the comment templates that come with a huge majority of themes just plain stink. Theme developers hate dealing with them. It’s usually an afterthought. So the commenting experience suffers. It is slow, ugly, and not at all fun.

“Both of these problems are solved easily with solutions like Livefyre or Disqus, so they get installed. But it’s just selling your users down the river. Your data is not yours, ads start showing up on your site. Privacy is out the window. And really, the performance gains are minimal when the embedded comments still take 10 second to load because there is so much tracking JavaScript being queued up in the background.”

In contrast, Epoch loads faster than third party solutions and is completely private. Your commenters’ data is not farmed out and comments stay on your server.

“For the first time someone can say this: running native WordPress commenting will actually increase your site performance,” Lemieux said.

What’s on the roadmap for the future of Epoch?

Lemieux and his team hope to attract a larger community around the project, which is open to contribution on GitHub.

“We plan on aggressively recruiting others to join the project and we hope other developers will be inspired by what we have started,” he said.

“We are going to build out a small API to make it easier for other plugins to hook into some of the advanced functionality.

“And there are a few things that feel like they may be necessary: comment voting and a simple little like button which would be handy as a way to say, ‘I appreciate what you said, I do not have anything else to add.’ I would love to integrate that with Postmatic. I often will get a comment in my inbox and I want to recognize the thought that went into it, but don’t feel like I have anything to add. A simple little +1 would do it nicely,” Lemieux said.

The 1.0 release of Epoch is exciting news for those who have been dissatisfied with WordPress native comments but are hoping for a reason to return. The plugin is open source and available for free on WordPress.org.