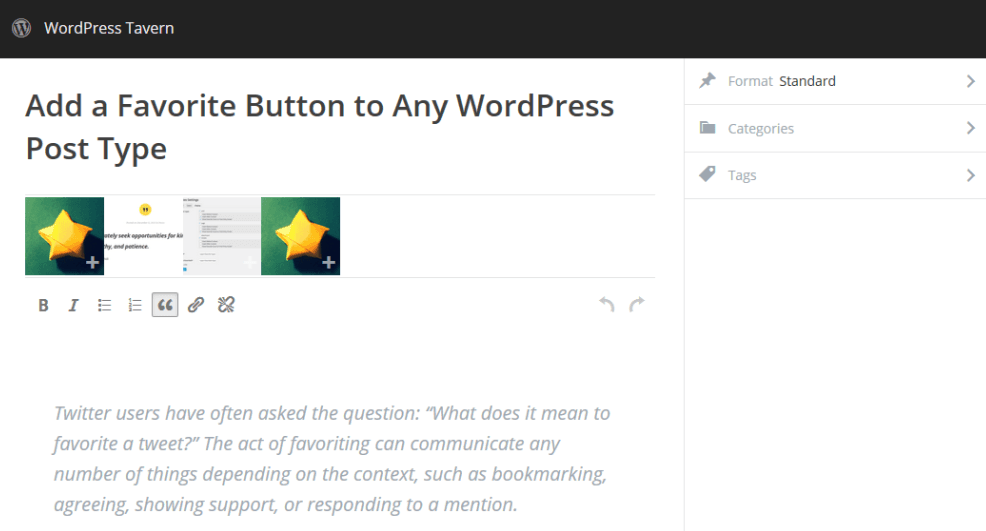 One of the highlights of the recent WordPress 4.2 release is the completely revamped Press This interface. The feature’s intended purpose is to make it easy to share text, images, and videos from around the web in a quick post, but many users are newly captivated by Press This’ new minimalist design for post creation.

Once you try Press This for publishing, you may become some so partial to the posting form that you don’t want to go back to the standard post editor. It includes only the most essential formatting buttons and a button to add media, with all other extraneous selections for post formats, categories, and tags collapsed.

Press This New Post is a new plugin, created by Drew Jaynes, that gives you quick access to the Press This posting form from the ‘+ New’ drop-down in the toolbar.

The link takes you to the Press This editor where you can scan a URL or simply start writing a new post.

In the plugin’s description, Jaynes refers to the easy access as “Quick Draft on steroids,” but it may also become a real substitute for WordPress’ dearly-departed zen mode. Many users are distracted by the sliding side menu and the fading of non-essential parts of the editor that was introduced in WordPress 4.1 when the Focus Project was merged into core. These animations are guaranteed not to happen to you in Press This mode. 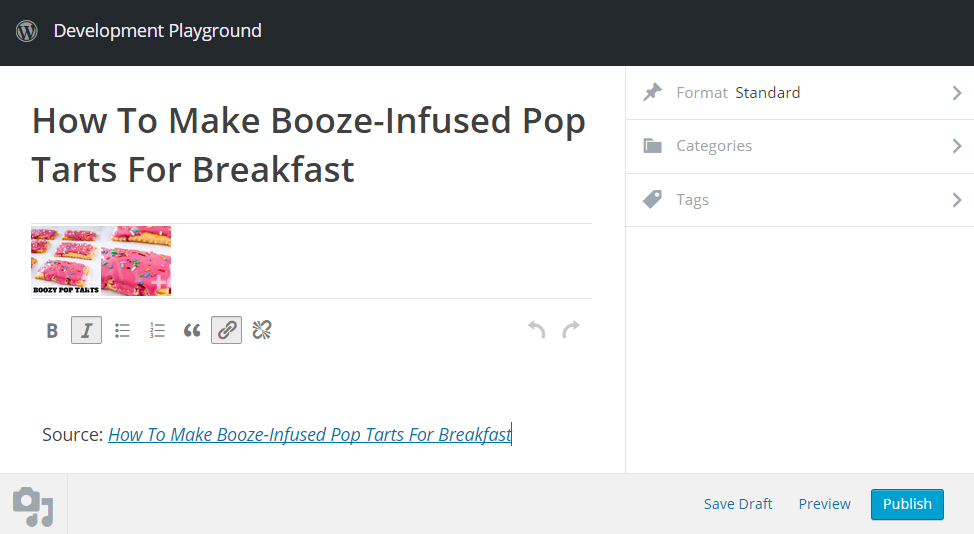 Jaynes is a regular user of the Press This post editor, which was one of his motivations for creating the quick access plugin.

“I think if we get to the point where Press This supports other post types and/or even other sites in a multisite network, it could really save a lot of time.”

The Press This team is actively working on continuing to iterate the feature along those lines and both Michael Arestad and Stephane Daury have stepped up as core component maintainers.

“I know for a fact that they both have future plans for improving and iterating it,” Jaynes said. “It’s actually really cool to see a continuation of the passion beyond a feature plugin getting merged.”

Michael Arestad recently posted his thoughts on the future of Press This and listed a host of features that the team is looking at adding:

With its committed maintainers, the Press This feature is well-positioned to evolve to support more diverse content types, which may attract even more users than the bookmarklet does in the long run. If you’re still thinking of Press This as just a simple bookmarklet for re-posting content, you may want to revisit it. The feature has the potential to influence future iterations of the standard post editor, which suddenly seems a little cluttered.

If you enjoy using Press This mode for creating new posts, the Press This New Post plugin might be a handy addition to your site. Download it for free on WordPress.org.