John Blackbourn announced this afternoon that he will be merging the Focus Project into WordPress core ahead of the upcoming 4.1 release. Last week Jeff Chandler explored how the Focus Project plans to enhance distraction-free writing in WordPress. If you haven’t been following the project, it’s essentially a complete re-think of the way WordPress has approached the DFW feature. 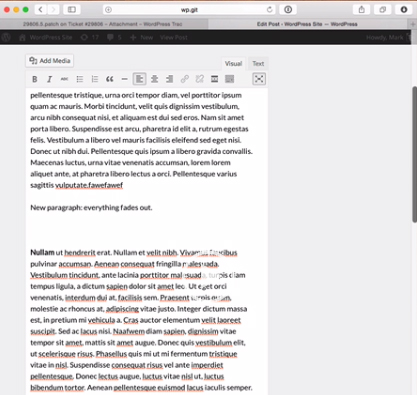 Mark Jaquith posted a demo video of the feature earlier this week when proposing it to be merged into core for 4.1. If you haven’t tested it yet, this video gives you a good idea of how the feature will work.

In general, WordPress users have found distraction-free writing to be a valuable experience but are dissatisfied with the disconnect of being separated from the rest of the publishing tools in the editor. The Focus Project minimizes the transition, automatically fading the non-essential parts of the editor when you start typing. It keeps the the publishing tools just a mouse swipe away.

The old DFW button is now changed to be a disabling toggle. For the 4.1 beta, this new feature will be automatically on, and WordPress core contributors will use this time to gather feedback and decide whether or not it should be on or off by default. If left on by default, it will be the most visible new feature in 4.1, since it impacts anyone who uses the content editor.

The second item approved for merge into 4.1 is the user session UI, which is essentially a button that displays when a user has more than one active session. When clicked, the button will log the user out of all other sessions.

During today’s core development chat, Blackbourn also outlined plans for the putting the session UI feature on track for future improvements. “We’ll use the session UI repo on GitHub for future iterations (and we’ll do it as a proper feature plugin too if necessary),” he said. “Or it might just not be developed any further.”

He also clarified that planned improvements to extension installation and update screens will not make it into this release. “So unfortunately due to the work that some core folks have been doing on 4.0.1, the improvements that were slated for the plugin and theme install (and update) screens has not progressed past mockups, so that has been shelved for 4.1,” Blackbourn said.

Under the hood, developers can look forward to progress on the taxonomy roadmap. Boone Gorges has made huge strides in fixing issues with shared terms. Unraveling this knot was an extraordinary feat, not unlike navigating through a minefield, when it comes to backwards compatibility.

As of 4.1, updating a shared term will cause it to be split into two separate terms. This solves a common problem where you update a term and have the others changed unintentionally. It also paves the way for more exciting improvements to taxonomy meta and post relationships, as Andrew Nacin outlined last year.

The new Twenty Fifteen default theme should also ship in this release, ready just in time for the new year. Blackbourn and contributors are aiming to have WordPress 4.1 beta 1 available Thursday around lunchtime GMT. The official release is scheduled for the week of December 8th.