Gutenberg 1.5 was released this morning and introduces several major changes to the plugin. This version takes the new editor off the back burner and makes it the default for creating new posts. The team has also included a way for users to create posts with the Classic Editor, but this requires knowing where to go to access the dropdown (All Posts » Add New).

The Extended Settings panel slides up to reveal accordion toggles for plugins that have meta box settings available. The design could use some improvement, especially for navigating back to the post editor. The panel takes over the entire section. On installations with lots of legacy meta boxes it is easy to get lost in all the open/closed toggles.

Gutenberg design lead Tammie Lister said this is the first step towards supporting meta boxes and that there will be iterations to follow. She also warned that it is possible some advanced meta box uses will not work as expected. The Gutenberg team is eager to receive feedback on these cases and will work to find solutions for them. Testers who discover issues with meta box support can post an issue on GitHub or via the plugin’s feedback form, describing the setup and how to reproduce what is breaking.

Version 1.5 also adds a new inserter button between blocks, which Gutenberg engineer Matias Ventura demonstrated with an animated gif in the release post:

This release adds a dropdown to the Publish button. It currently supports visibility and post scheduling features. 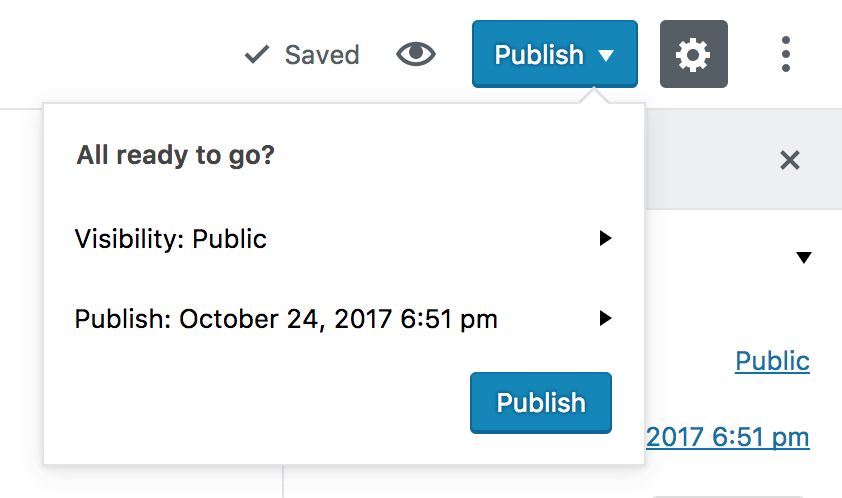 There was a great deal of discussion on GitHub surrounding the UI for the publish button, whether it should be a split button dropdown or a single button that provides slightly more friction to prevent accidental publishing. The general consensus was that introducing a bit more friction is desirable, as contributor Davide Casali noted there are many cascading actions that are often tied to the Publish button:

“Some automated publishing actions are irreversible: pings gets sent, emails get sent, Facebook and Twitter gets updates, etc.,” Casali said. “This is very very important for a lot of people and businesses, and nobody wants to send out such actions by accident.”

Contributors are looking for feedback on this implementation and are willing to explore some alternate design options as well. They agreed that it is more important to make the Publish button area pluggable and to work on adapting it based on feedback.

For those who want to completely disable Gutenberg, a new plugin called Classic Editor is available on WordPress.org and ready for testing. It requires WordPress 4.9-beta2 or newer and Gutenberg version 1.5+. Classic Editor comes with two modes that give users the option to fully replace Gutenberg or allow access to both the old and new editors:

A setting for switching between the modes is available at Settings » Writing. Other plugins for turning Gutenberg off will likely pop up the closer the it gets to being included in core, but Classic Editor is the official one recommended by core contributors.

The timeline for the merge proposal is not yet set in stone but the Gutenberg team aims to get it more widely tested before writing the proposal. The plugin is currently active on approximately 3,000 WordPress sites.

“The plan is to still have the plugin ready by December, but with holidays the actual merge proposal might be next year,” Tammie Lister said. “It’s important that we get as many users and as much feedback as possible at this point. All of that impacts what happens going forward.”