Every day, millions of people mindlessly pump content into social networks that are owned by someone else. These massive data silos plaster your feed with advertising and blatantly disregard user privacy. It’s a symbiotic relationship wherein you are the product being sold, but you have no control.

Even Twitter, which many saw as the last vestige of social networking sanity, appears to be inching closer to filtered feeds, experimenting with an algorithmic approach to the timeline in order to deliver content they deem relevant to you. All the major social outlets are starting to pollute users’ feeds with content they don’t want to see; it’s the inevitable byproduct of mining user data for profit.

A growing dissatisfaction with this pollution is leading innovators to create new streams of social interaction, with more realistic business models that deliver an unpolluted experience as the product. Many are turning to private social networks as an alternative to the sprawling networks that invariably attempt to connect you to every passing acquaintance. 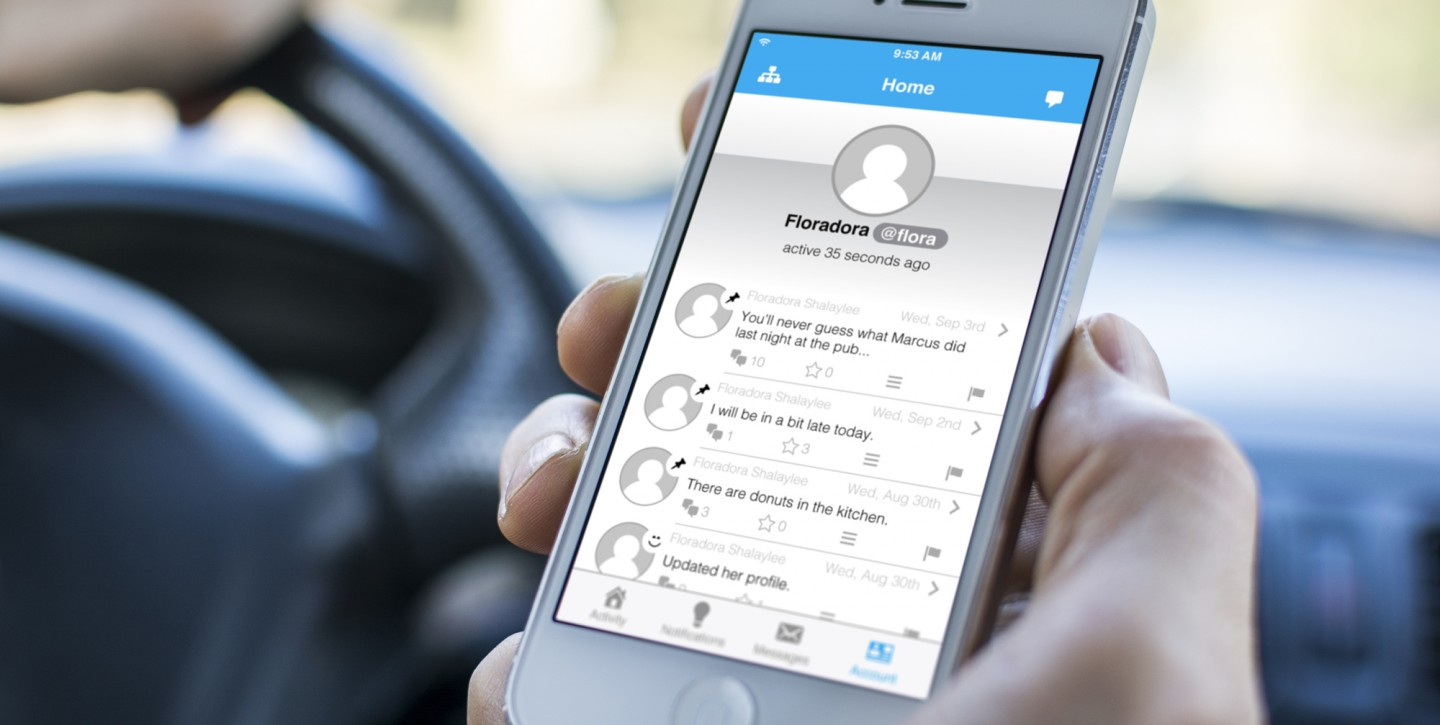 Flox is a brand new service will soon be launching hosted private networks powered by WordPress, BuddyPress, and Framework7. The platform will allow you to host your own social network, completely under your control, with the ability to send status updates, photos, messages, and more, in your own private place on the web. Flox users can be part of multiple networks or “flocks,” hence the platform’s sheep logo.

Founded by BuddyPress project lead John James Jacoby, Flox is the first WordPress-powered application to jump into hosting full-featured social networks. Jacoby recently left his engineering position at 10up, to pursue his dream of creating hosted communities. Fortunately, Jake Goldman and the folks at 10up were behind him and opted to subsidize the project.

“Jake and I talked about the idea (again) and came to the conclusion it wasn’t something Jake saw 10up being responsible for in perpetuity, but was still valuable,” Jacoby told the Tavern. “Jake and the 10up execs were kind enough to invest a bit in helping bootstrap it. They’ll be my initial round of beta testers.”

The unique thing about Flox is that it’s designed to be a mobile-only network. At the moment, the only way you access it is via your mobile browser. There is no desktop version. Jacoby describes it as “a mobile experience that acts more like Twitter meets Slack powered by BuddyPress, than it does ‘large blogging network conglomerate.’” Essentially, it is the “WordPress.com for BuddyPress,” but he hopes that it will be much more than that.

The possiblity of hosted BuddyPress communities has been burning in Jacoby’s head since his earlier days at Automattic. “The idea goes way back to 2007/8, with the idea of BuddyPress on WordPress.com. When Matt eventually abandoned that idea, I couldn’t let go of the bigger idea of letting people roll their own WordPress.com’s,” he said.

Why is Flox mobile only? Jacoby believes this is the way of the future for online social interaction.

The idea to go Mobile-only was inspired by a few things: Jake Goldman really wanted a great mobile experience to communicate with 10uppers; I believe we’re entering an era where many people will use mobile devices as their only machines; my desire to funnel the most relevant and important people in my life into a convenient, easy-to-use, and own-my-own-data place in my pocket.

Jacoby is flying solo on the project for now but he hopes to add to his team as the platform gains momentum. “By the end of the year, my goal is to have at least one full-time employee on it besides myself,” he said. “Ideally many more down the line, but we’ll see what I’m able to pull off.”

The Technology Behind Flox

Conversations in Flox include all the native BuddyPress social features distilled into a UI that is highly optimized for mobile. Users have the option to create “channels” to further filter the activity stream. 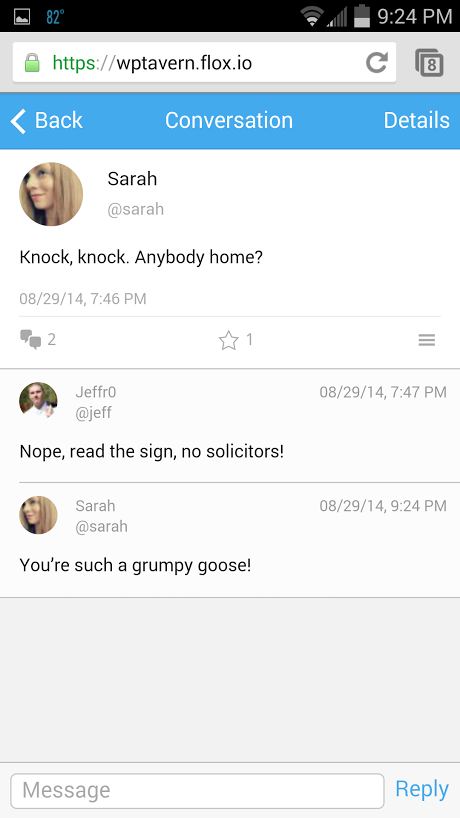 Flox is intended to be an application where its users never see the backend of WordPress. Jacoby hopes to preserve wp-admin to be used strictly as a UI for Flox staff to manage the installation. The idea is that administrators of their own networks will get a purposely crafted experience, without all of the maintenance associated with managing a WordPress site.

Under the hood, each flock is its own network on a multi-network installation of WordPress. “BuddiOS is the heart of the mobile experience, at least right now,” Jacoby said. “Currently, it’s a WordPress theme, though it might eventually turn into a plugin that auto-detects a mobile environment, and adjusts. We’ll see how that experience pans out in the long-term.”

Outside of WordPress and BuddyPress, Framework7 is the only other technology in the mix right now. “I started down the AngularJS road but it’s not really the right tool for this job,” Jacoby said. “I can see future versions using a restful API, but for what I need and how much work needs to go into that API, I wasn’t inclined to rush it.”

Why isn’t Flox launching with a native app? Jacoby wants to start out by refining the experience of the basic social features before delving further into integrating with native device features. “I built a ‘native app’ using a UIWebView that I’m using personally, but that alone isn’t enough to make it into the Apple App store,” he explained. “It will need to use something native to the phone first, which will likely be push notifications or settings integration.”

Jacoby plans to put the BuddiOS WordPress theme up for sale to start, in order to help further subsidize BuddyPress/Flox development. Now that he is focusing on Flox, he has a greater ability to contribute to the open source BuddyPress project, which is entirely volunteer driven. This can only mean good things for the future of BuddyPress.

Flox is emerging as a fresh alternative to the massive social networks where you have limited control over the content presented to you. Online social networking, in its purest form, is the ability to have authentic interactions with the people you choose. Flox is aiming to restore the simplicity and power of small, focused networks but is also built to scale to accommodate large businesses that require social networking for employees.

Users can create several networks, each with their own members. The platform is designed to make it easy to switch between your various private social networks and pricing is flexible based on the number of users. Personal networks are free and limited to 5 users in 5 networks. The Business pricing option rings in at $3/user per month and is limited to 25 users. Pro social networks do not have a user limit and receive access to priority support at $10/user per month.

The platform is a promising option for those who want the power of mobile BuddyPress social networking without the hassle of managing their own installations. It also appeals to those who are looking to leave traditional social networks in favor of creating their own.

At the moment, Flox is in its early beta period and signups are limited to a few testers. The service will be launching soon, putting private social networks in the pockets of users around the world.