The BuddyPress 2015 survey results are now available. This year’s survey did not have the same community penetration as 2013 and 2014, with 37.5% fewer respondents, but the information is still valuable for gauging how and where people are using the plugin. Volunteers collected feedback from 211 participants in 42 different countries.

Feedback this year shows a few significant shifts from previous years, especially when it comes to languages used on BuddyPress sites. The top three languages in 2015 are English (69.23%), French (10.26%), and German (7.69%). In 2013, language usage was fairly evenly divided between English (56%) and non-English sites.

On the surface, the language results seem to indicate a shrinking international community, but it may be due to the fact that the survey lost participants from 20 countries captured the previous year.

Commercial BuddyPress Themes are on the Rise

Results indicate that 34% of community managers and developers surveyed are building BuddyPress sites with commercial WordPress themes that offer custom BP CSS and/or template modifications. That number is up from 26% the previous year, likely due to more BuddyPress themes entering the market.

Accessing BuddyPress sites via mobile is also slowly on the rise with 63% of respondents reporting that they’ve used a smartphone to access their sites. It’s no surprise that the survey shows mobile responsiveness is one of the most important factors in theme selection.

Other preferred BuddyPress theme features include compatibility with the latest BP version and a light/fresh design. This preference may be due to kinds of sites that users are building, which remain fairly unchanged from previous years:

Results show that the most used BuddyPress components are Extended Profiles (71.13%) and Activity Streams (66.49%), followed by User Groups (57.22%). Although Profiles and Activity remain dominant, they are waning slightly from the previous year while Groups are increasing in popularity. 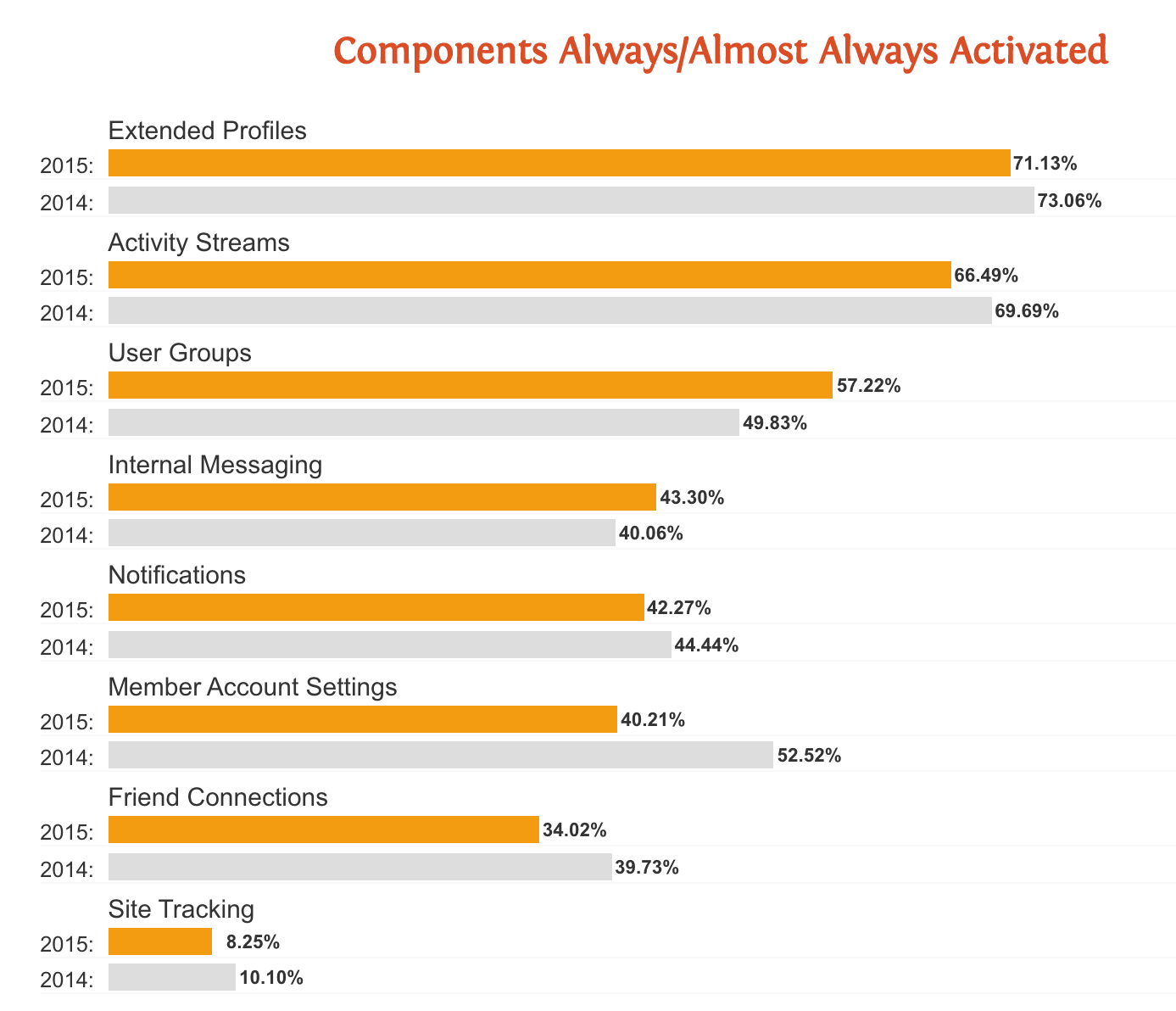 Surprisingly, Friend Connections, which are often associated with social networks, rank quite low on the list of components, trailing Messaging, Notifications, and Account Settings. Site Tracking, a feature used most often with multisite, ranks dead last among components that are always activated at just 8.25%.

If you take a look at the features on track for BuddyPress 2.3, the direction of development seems to be trending toward improving the components that users are mostly likely to activate. Last year’s major performance improvements reduced BuddyPress’ footprint by up to 75% in many places, especially for sites that rely on activity and member directories.

The recent additions of the Member Types API and upcoming Attachments API greatly improve the extensibility of components that BuddyPress site administrators are most frequently using. The survey results confirm that BP core development is being shaped by community feedback and overall the software is improving for those that are actively using it.

The anonymous comments on the survey provide some critical feedback that indicate it may be time for BuddyPress contributors to reconsider how the software is presented to the world. One respondent feels that the tagline “social networking in a box” is inaccurate, given recent developments in other social networking software:

BuddyPress is some distance behind the features people now expect of modern social networks. OK for school, or small intranet purposes, but to call it ‘social networking in a box’ is slightly stretching reality.

BuddyPress also continues to be somewhat daunting for beginners. Developers can be sold on its extensibility, but your average user trying to set up a social network will have a sharp learning curve when it comes to adding features beyond what is offered in BP core. That frustration, when it comes to extending the software, seems to make its way into users’ opinions of BuddyPress in general.

I’ve been trying to learn BuddyPress for about a year. Setup is super easy. Mods are always a pain. I understand this has to do with community support. Everybody wants answers. Few pitch in to help.

This year’s survey results and user feedback provide BuddyPress core contributors and volunteers with some important ideas to consider for shaping both development and community support in the future. The full results of the survey are available on GitHub with a more detailed breakdown and charts for each question.