BuddyPress 2.0 Ramps Up Performance, Reduces Footprint by Up to 75%

For the past couple months, BuddyPress core developer Boone Gorges has been hinting at some big performance improvements coming to BuddyPress 2.0. He’s been working tirelessly to make the plugin faster and has published some benchmarks to demonstrate the improvements in 2.0.

Here’s a visualization of the reduced query time on the activity directory page with default filters, viewed as a logged-out visitor, with APC on. 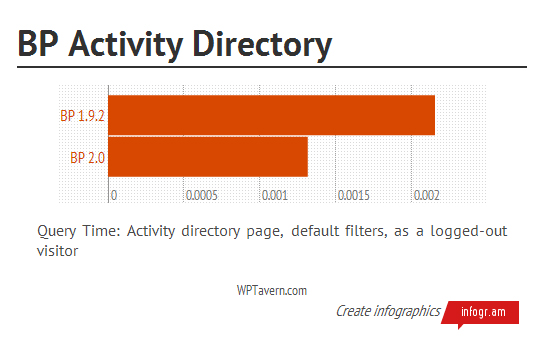 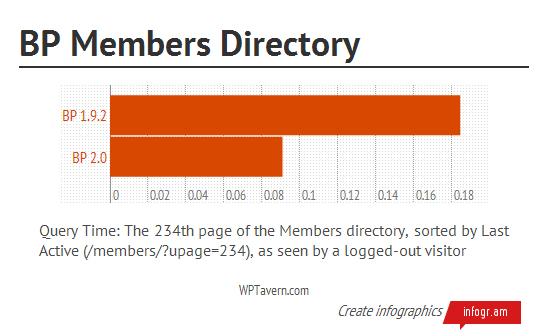 As you can see, the query times have been reduced by approximately 50% in both cases, which is going to make BuddyPress 2.0 much more zippy and enjoyable to use. Check out Boone Gorges’ post for more data, as this is just a small sampling.

BuddyPress Footprint Reduced by Up to 75% in Many Places

Gorges generated 30,000 members and 60,000 activity items for the tests used to report these benchmarks and found that the BuddyPress footprint for 2.0 has been reduced by up to 75% in many places.

The number of queries per page load in each case has been cut by up to 50%, and query time, on average, has been cut by more than 50%. And remember that these numbers are total values – it’s BP on top of WP’s standard queries. That is to say that the query footprint attributable to BP itself has been reduced by up to 75% in many places.

Additionally, Gorges said that his tests revealed corresponding improvements in script execution time and memory footprint, but since those numbers are dependent on the hosting environment, he decided not to include them in his report. Nonetheless, it should be exciting to see how BuddyPress performance improves across the board.

The drastic increase in performance is one major reason why you’re going to want to be ready to upgrade to BuddyPress 2.0 when it is released. Test your site with the 2.0 Beta 1 now in order to get your ducks in a row and help report any bugs. BuddyPress theme and plugin developers will want to have all of their products compatible with 2.0 as soon as it’s out the door, since BP site admins will likely be anxious to update their sites immediately.

For anyone who hosts a BuddyPress community or participates in one as a member, your experience with this software is about to be drastically improved. Look for the official BuddyPress 2.0 release to drop the same week as WordPress 3.9.

2 responses to “BuddyPress 2.0 Ramps Up Performance, Reduces Footprint by Up to 75%”