Anders Norén has released Chaplin, his 20th free WordPress theme, designed specifically for use with the block editor. Chaplin could be loosely described as an agency or business style theme but the capabilities of the block editor enable users to create advanced page layouts that would suit many different types of websites. 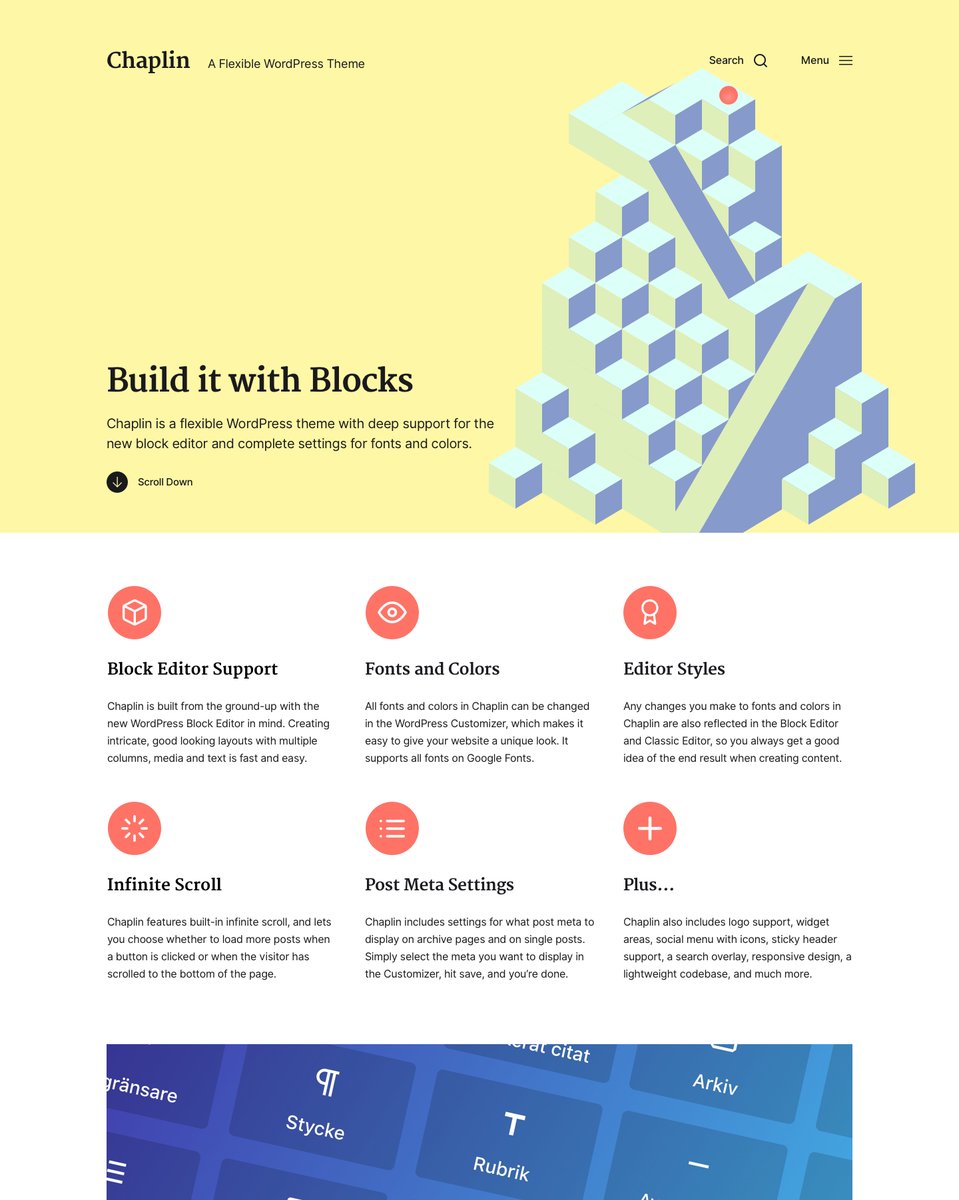 The layout for the front page shown in the screenshots can be easily recreated by adding a new page, selecting “Cover Template” for the page template, and adding a featured image. Users can then add columns, images, and paragraph text using the block editor to recreate the structure of the demo. Norén has included detailed instructions in the theme’s readme.txt file for setting it up to look like the demo.

Font and color settings can both be found in the Customizer and these styles will be reflected in the block editor for a more realistic preview of the content. Chaplin comes with infinite scroll built in and additional settings for displaying and hiding specific post meta on archives and single posts. The theme has logo support, widget areas, a social menu with icons, sticky header support, and a search overlay. Check out the live demo to see all the features in action.

Shortly before the release of WordPress 5.0, Norén worked to get all of his themes compatible with the new block editor. Most of his previous themes were created to be niche-specific and easy to have looking just like the demo upon activation. One drawback was that the only way to really customize his themes was to create a child theme and add/or custom CSS, something that is out of reach for most WordPress users.

In a post introducing the theme, Norén described how the new block editor inspired him to start building themes differently than he had in the past.

“For a while, though, I’ve been thinking about how I could build a theme more customizable than the ones I’ve been making so far,” he said. “With the introduction of the Block Editor in WordPress 5.0, any page on a WordPress site can accommodate pretty much any layout, making WordPress itself a lot more flexible than it was just a year ago. If the Block Editor would enable users to create any layout on their site, and the theme would allow them to style the layouts however they want, then that could end up being pretty useful.”

Chaplin is a successful departure from Norén’s previously static themes that gives users more freedom simply by making the block editor the main vehicle for creating and rearranging the home page layout. No two customizations will look exactly alike because users can arrange blocks in any combination. 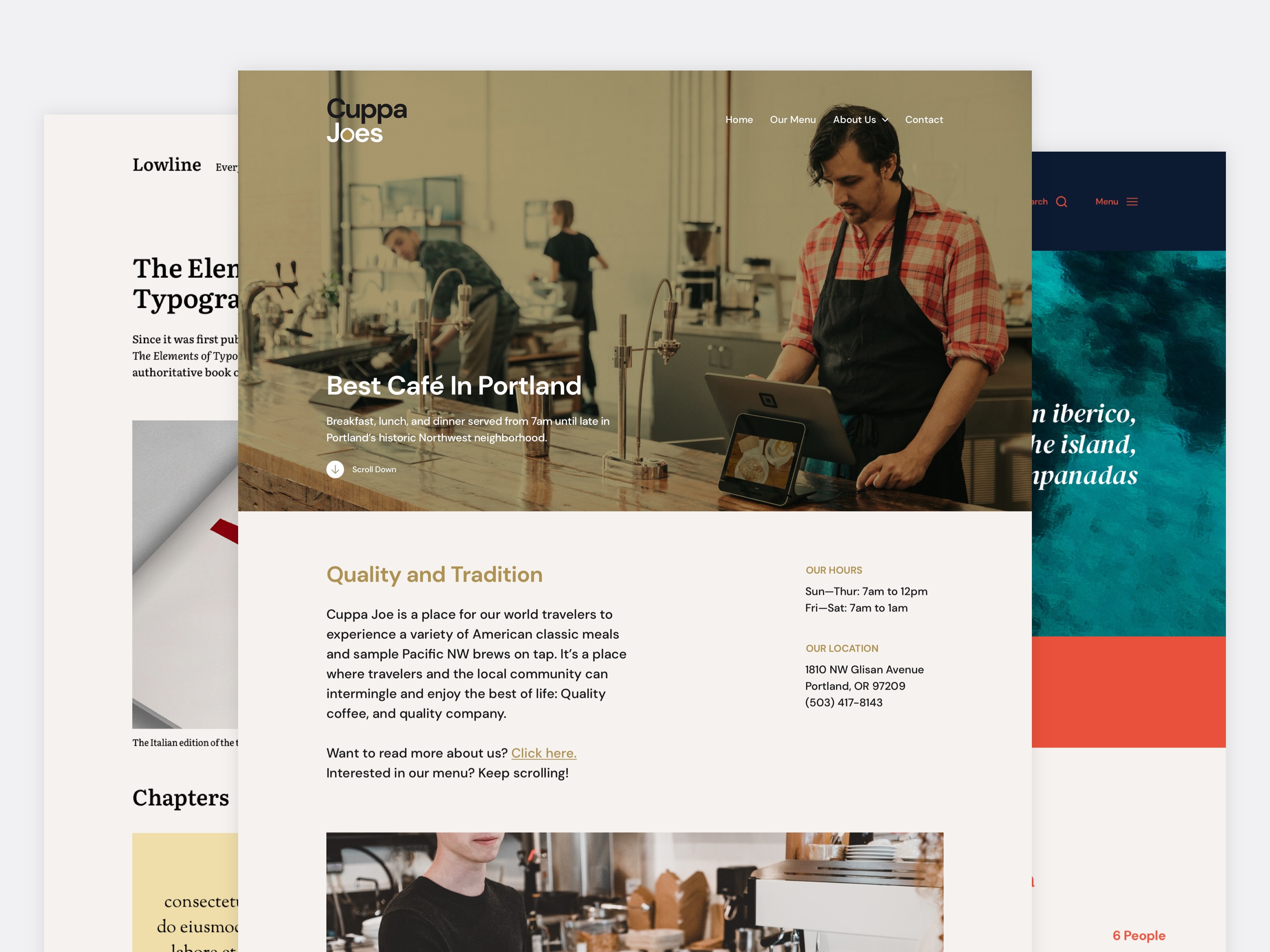 This theme is a good example of the possibilities that the block editor opens up for users who want more control of their sites’ layouts and content without having to wade through pages of documentation and dozens of panels of Customizer options. In many ways, themes that fully embrace the block editor are beginning to make older themes seem two-dimensional. This shift in focus is an important milestone in the evolution of theme development.

Based on the community response to Chaplin’s release, it’s clear that there is a real demand for themes made specifically for the block editor. However, WordPress.org is not currently set up to promote themes like this.

If you filter for “block editor styles” and “wide blocks” when searching for themes, WordPress.org search currently returns just 26 themes.

Unless you already know about a specific theme and search for it, the best themes are difficult to find. The Featured and Popular Tabs inside WordPress’ theme browser do little to surface block-ready themes.

In a related discussion that popped up over the weekend, long time Theme Review Team member Justin Tadlock contends that the WordPress.org theme directory is “becoming little more than a crippleware distributor.” He is referring to those themes that do not enable users to further customize them but rather lock away certain features behind upsells.

“Essentially, many themes submitted are a ‘lite’ or ‘free’ version of a commercial theme with extremely reduced functionality,” Tadlock said. “For example, we had a theme author trying to upsell access to post formats (a core feature) the other day.”

Fellow Theme Review Team member Danny Cooper cited Elementor’s Hello Theme as one example of “the new breed of themes that only exist to ‘sell’ something else.”

Participants in the discussion suggested WordPress.org employ stricter enforcement of upsells or implement a more nuanced tag system that would identify themes that have some features locked for users who don’t purchase an upgrade. Others suggested theme authors meet the minimum accessibility requirements as a new threshold for entry into the directory, which would likely slash the number of themes waiting to be reviewed and incentivize companies to invest in accessibility testing to improve that process.

“Honestly, I would prefer all themes with upsell to be filtered out into their own section of the directory, so it’s clear to visitors what themes are free and what themes are ‘free,’ Norén said in response to the discussion. “It would also reduce the incentive for theme shops to flood the directory with crippled themes.”

Norén is one of a handful of theme authors who are submitting high quality themes to the directory that are truly free from upsells. In a time when it’s still not common to find new themes built specifically for the block editor, WordPress.org might benefit from featuring these themes in the same way it does for block-enabled plugins.