When we last interviewed Anders Norén, he was the new kid on the block with a handful of successful WordPress themes. Norén, a communications student from Umeå, Sweden, had just started tossing around the idea of pursuing WordPress theme development as a serious hobby. In the span of about one year, he has released eight free themes on WordPress.org, with a cumulative 189,452 downloads.

Norén seems to be equipped with a never-ending fountain of inspiration for new themes. His Rams theme, which bears a few similarities to the upcoming Twenty Fifteen default theme, was inspired by Dieter Rams, a German industrial designer who is well known for his innovative, unobtrusive, and timeless product design.

I spoke with him regarding Hoffman, his latest free blogging theme and discovered that his design inspiration primarily comes from the recognition of others’ artistic talents.

“Hoffman was named after the actor Philip Seymour Hoffman, who sadly passed away in February this year,” he said. “I was devastated when I heard the news. I’ve been a huge fan of Hoffman for years. He was never the traditional leading man, but he always gave memorable performances,” Norén said, linking to one of his favorites. 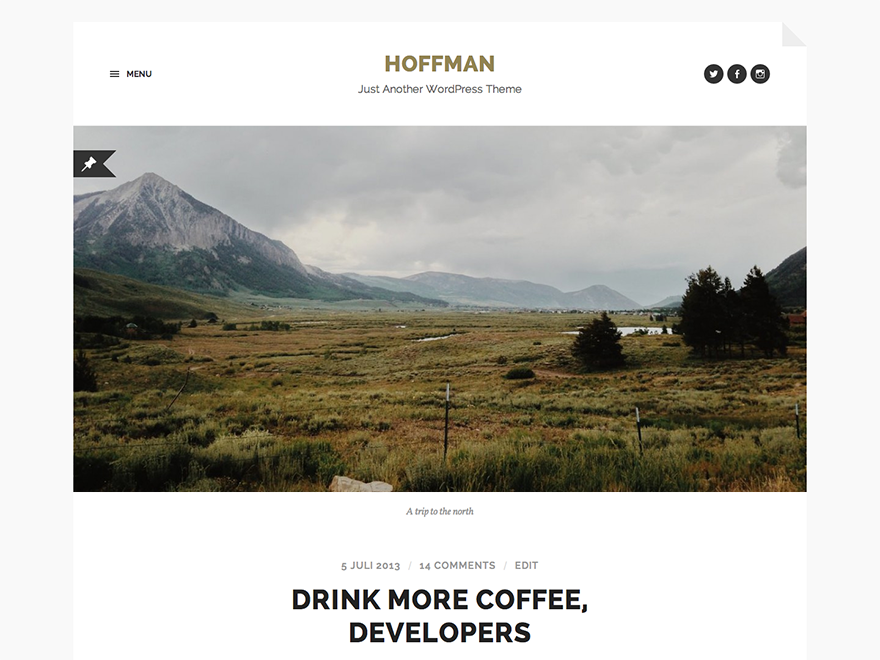 While many designers have inspiration come in the form of images, dreams, and sketches on paper napkins, Norén’s sparks of creativity for theme design arrive as clarion pieces of the design as a whole. He builds upon these fragments until the theme starts to take shape.

“Usually, is starts with a pretty clear idea of a single aspect of the design. With Rams, it was the interplay between the colors mint green, graphite and grey. I stumbled over the color scheme on the website of a Dutch advertising agency and instantly fell in love with it,” he said.

“With Radcliffe, I wanted to do a theme with fullscreen featured images. With my upcoming theme Fukasawa, I wanted to do a really clean design built with a media-heavy grid in mind. When that single detail is in place, the rest usually grows naturally around it,” Norén told the Tavern. His approach is interesting in that instead of trying to formulate pieces for a larger idea, he starts with the smaller pieces until they form a unified concept to drive the design.

Norén’s Secret: Jump Into the Code as Soon as Possible

Once inspired, Norén doesn’t sit idly courting the muse but rather moves directly into action, prototyping his theme idea in the browser. “Once I have an idea, I try to get started on the HTML/CSS/jQuery as soon as possible,” he said. “I rarely do any sketches – by hand or in Photoshop – before I jump into the code.”

Norén’s “design in the browser” approach makes sense with people increasingly accessing content on mobile devices. In fact, it’s one of the best ways to find if out if your idea is viable as a theme. “I find it hard to know whether a design will work until I have it up and running in Safari,” he said. “Most of the designs don’t work. My list of discarded themes is a lot longer than the list of published ones.”

Releasing Free Themes as a Vehicle for Personal Creativity

A WordPress.org theme developer has the luxury of designing for himself, something that Norén isn’t yet ready to give up. I asked him why he continues to release free themes and if he plans to make a career out of web development.

“In the beginning, I think a lot of it came down to insecurity,” he admitted. “I wasn’t sure my themes did enough or did it good enough for anyone to pay for them, so I released my themes for free on WordPress.org instead.

“That said, once I started releasing themes on WordPress.org, I realized that it was a lot of fun. The attention and appreciation of others is nice, of course, but the best part is seeing someone putting your theme to good (or unexpected) use,” he said.

“Also, by not being dependent on my themes for income, I can keep building the themes I want to make rather than the ones I think people would pay for. I don’t think I’m willing to give that up just yet.”

Giving himself over to his hobby of theme development is the path that led Norén to discover that his true passion lies in designing and developing for the web.

“When you interviewed me six months ago, I didn’t really have any intentions to actually work as a web designer,” Norén said. “I was content to keep it as a hobby. Over the course of the past six months, I’ve come to realize that that isn’t the case anymore. I’ll be looking for a job as a web designer after I’m finished with my BA in June next year.”

Although he’s already been approached by several companies, he is committed to finishing his studies before pursuing a career in development. “I’ve already had some job offers, some for contract work, some for employment, but I would kick myself for all eternity if I bailed on my studies with less than a year remaining,” Norén said. “That said, if Automattic got in touch about a job as a theme wrangler, I would probably have a hard time turning them down.”

Looking to the Future

Outside of his upcoming Fukasawa release, Norén doesn’t have any other themes in progress due to work and studies taking up most of his time. That hasn’t stopped ideas from buzzing around in his head. “I would like to build something using the new portfolio post type included in Jetpack, and it’d be interesting to build a business theme for WordPress.org as well,” he said, noting that the selection of themes in that category is still very limited. Although he won’t be able to work on themes until December, he hopes to build another to release before the holidays are over.

Anders Norén is knocking it out of the park with his continual stream of beautiful free themes. While many theme developers struggle to produce original works, Norén has found the keys to standing out from the crowd, as evidenced by the fact that he is rapidly closing in on 200,000 downloads on WordPress.org. With an impressive portfolio already in hand and a seemingly inexhaustable supply of design inspiration, Norén will enter the work force well-prepared for the stiff competition that accompanies commercial WordPress theme design.