WPCore App Adds Export Feature: Save Active Plugins to a Collection with 1-Click

We’ve been following the evolution of the WPCore plugin management app, which recently added favoriting, update notifications, and the ability to add plugins that aren’t hosted on WordPress.org. Today, the app’s developer, Stuart Starr, announced what is perhaps the most convenient feature to date.

With WPCore Plugin Manager installed, users can now export all of their plugins with one click and save them to a new collection on WPcore.com. This is useful if you have a site that already has all the plugins you want to include in a specific collection.

Despite the fact that the plugin makes it convenient to install all your favorite plugins in one click, you may find that building collections requires quite a bit of work. The new export feature makes it possible to build a collection instantly, based on an existing site’s active plugins. Currently, it can only export active plugins hosted on WordPress.org, but Starr plans to expand the feature in the future.

Another new feature that you’ll find on the app side of WPCore is the ability to clone other users’ collections. Perhaps you want most of the plugins in one collection but want to add or remove a few selections. Click on the new clone button to copy the collection to your own account for editing. 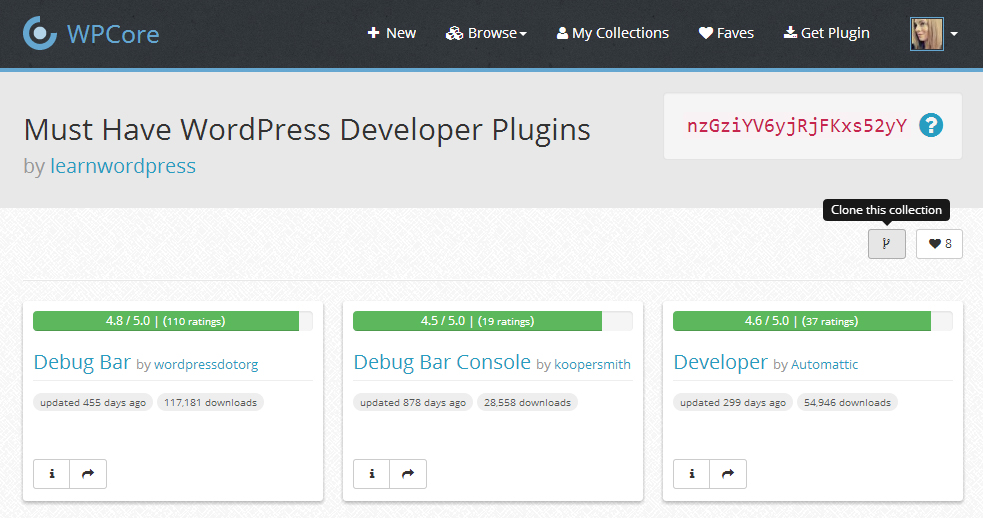 Starr is continuing development on the app and plugin, inspired by positive feedback from users who are saving time with WPCore. “The feedback has been amazing. In terms of users we are getting new users daily,” he said. One satisfied fan dubbed WPCore the “Pinterest for WordPress plugins.”

September will bring a major update to the service. Starr wouldn’t comment on the specifics of features on the way but he did reveal that he is currently working on a referral system. WPCore is moving to a paid subscription model as of August 31st but users who sign up before that time will be grandfathered in as Pro members for life. New free signups will continue to have access to the basic features of the app.

One response to “WPCore App Adds Export Feature: Save Active Plugins to a Collection with 1-Click”