In one of the most unpopular changes in the history of the WooCommerce open source project, version 3.6 will introduce “Marketplace Suggestions.” The update adds suggestions to the products admin screen, which vary based on whether it’s an empty state or within the list of products. 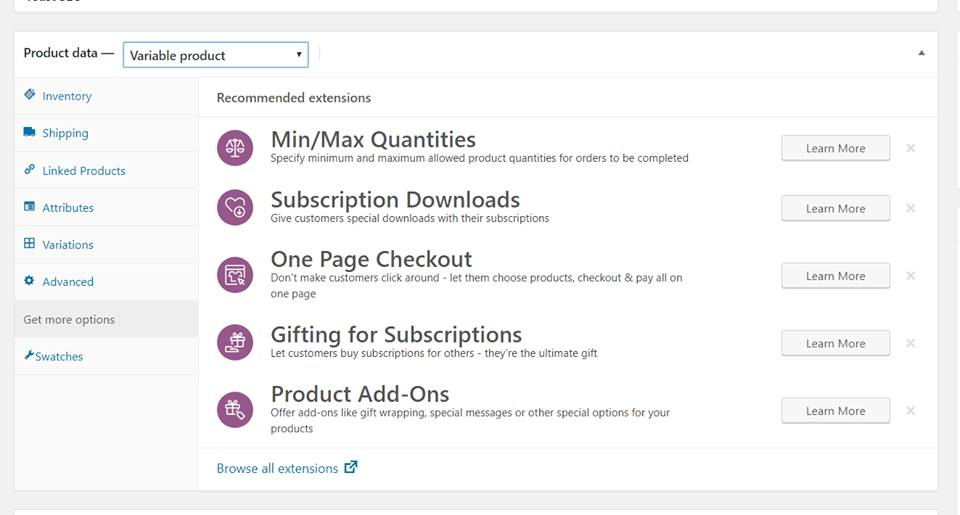 “They are contextual mentions of official extensions that may be relevant to a customer,” Todd Wilkens, Head of WooCommerce, said. “This currently includes all extensions on the official WooCommerce marketplace, which is open for submissions and lists extensions written by Automattic as well as by trusted partners and third-party developers.”

The suggestions are on by default for users who can install and activate plugins. They are dismissible, but the frequency with which they will be shown is one of the most contentious aspects of WooCommerce’s proposed implementation:

WooCommerce is providing a filter to turn off the suggestions, and this will likely soon be available as a plugin from the community. It is not something that is easy for non-technical store owners to implement.

“If the above removal-by-script option proves to be difficult to implement – for example, for those who are not comfortable adding custom code – we will explore introducing a simpler way to turn them off and include this in a point release (e.g. a toggle in core settings),” Wilkens said.

The feedback coming in on the announcement post and WooCommerce’s GitHub repository is overwhelmingly negative. In a comment on an issue titled “Rethinking 3.6’s Dashboard Ads,” Josh Kohlbach contends that WooCommerce should limit its marketing to the plugin’s dedicated Extensions screen in the dashboard:

In addition, didn’t anyone think it might be a conflict of interest for WooCommerce the commercial entity to use WooCommerce the open source plugin to show ads in this manner? Bit anti-competitive to all the 3rd party devs out there (of which there are a lot).

WooCommerce already has an amazing page under WooCommerce->Extensions with full searching capabilities etc. Why would you want to show irrelevant ads during a user’s everyday workflow?! Store owners use these screen daily, it’s terrible UX.

I suggest that it gets ripped out in its entirety and filed under “cool implementation/fun to code but horrible idea for actual users.

For those who do not stand to benefit from profits from the 400+ extensions on the WooCommerce.com marketplace, the intrusions in the product admins screen seem all the more offensive. Marketplace suggestions have not been well-received by third-party extension developers.

“This is in direct competition to every third-party developer that is not selling on WooCommerce’s marketplace,” Jamie Madden, founder of the WC Vendors Marketplace, said. “I am one of these. This is advertising for your commercial products, no matter how you try and wrap this. You have an extensions page already which is more than enough, but advertising your products every 24 hours is going too far. This is completely unacceptable.”

The general consensus of those participating in the ticket is that injecting ads into product management screens will create a disruption to store managers’ workflow.

“I too am very concerned about this,” digital agency owner Erik Bernskiold said. “I get that WooCommerce want to benefit from their commercial side, too, and there are many ways to do this. But in this case, it feels like this is at a great disregard for the users. Hijacking a product list, order list or a user interface element in this way is a major interruption of the user experience. It’s not the place for an ad.”

Several participants in the discussion have suggested that WooCommerce make it an opt-in toggle in the settings.

“There is only one scenario where I think this feature should stay in place and could be beneficial: If this feature is controlled by an opt-in toggle in WC settings,” Jeremy Pry said. “Otherwise, this whole feature should be removed entirely. Store owners don’t need advertisements in their admin dashboard. In my opinion, leaving this feature in place would be very harmful to the WooCommerce community.”

Marketplace Suggestions Require Dismissal Every Day for 5 Days, Only to Return 1 Month Later

The fact that the suggestions cannot actually be dismissed for good is one issue that developers predict will end up aggravating WooCommerce users.

“Dismissing just to keep hounding the user, that’s not dismissing… that is snoozing,” WordPress developer Patrick Garman said. “Because I told you 5 times that I don’t want to see your ads, that doesn’t mean come back in a month. The average user shouldn’t have to use a filter to make ads go away.”

I would not be surprised if WooCommerce ends up dialing back the frequency of the ads after they are closed, given that nearly all those participating in the conversation consider it unacceptable to require dismissal five days in a row, with the same process repeated every month thereafter. The frequency with which they are displayed is unusually aggressive.

“I don’t think it technically violates the guidelines it’s just obnoxious and makes WooCommerce look like a low rent solution,” Astoundify founder Adam Pickering said. “It seems we are in a midst of a monetization push and they are looking for any where they can add up sells. Apparently doing so gracefully has gone out the window.”

Despite the overwhelmingly negative feedback, WooCommerce appears to be ploughing forward on its plan to ramp up its marketing in the admin. Automattic is a business and it needs to make money with WooCommerce. Most participants in the discussion do not seem opposed to WooCommerce making money with marketplace suggestions but are strongly requesting that they do not inject ads in places where users are working on their own products in the admin.

“There’s nothing necessarily wrong with ya’ll trying to squeeze out some more money from users – so long as it’s done tastefully, and in a way that actually provides value to the user, instead of spamming and hindering them,” @justlevine commented on the GitHub issue.

Based on the WooCommerce developer community’s feedback, many are in agreement that they will only support changes will be respectful to store owners working in the admin. They would prefer WooCommerce focused its efforts on improving the existing Extensions tab, instead of injecting items from the marketplace on other screens. The current implementation of marketplace suggestions needs work, because it is too heavy-handed in displaying ads after users indicate through the UI that they want to dismiss them.

Most participants in the discussion are in favor of letting store owners decide if they want to see ads for extensions on their product admin screens. They would prefer that users opt in through a more transparent way than simply agreeing to terms of service. At the very least, most prefer WooCommerce add a setting that would allow store owners to easily turn marketplace suggestions off. If Automattic wants this new feature to be successful, the company needs to revise the implementation to be something that doesn’t instantly make the majority of the WooCommerce developer community want to turn it off.