Tom Nowell on How Automattic Keeps Workers Healthy and Happy 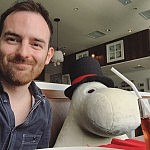 This post was contributed by Tom J Nowell. Tom is a VIP Wrangler at WordPress.com VIP, lead of the WP The Right Way project, blogger, and community moderator at WordPress Stack Exchange. Tom will be speaking at WordCamp New York later this month on escaping and security.

This is a story about my job as a VIP Wrangler, what Automattic does to keep Automatticians happy, and my battles with anxiety, depression, and fear.

Almost a year ago, I worked for Code For The People, a six person development agency that was in acquisition talks with Automattic. I remember at the beginning of the week, we thought an acquisition could happen before Christmas and by the following Friday, we were signing new employment contracts, and booking tickets to Lisbon for the VIP team meet up!

I remember being the first to arrive, surrounded by people from the VIP team I’ve never met in person. We went out for dinner, learned how to do deploys, visited aquariums, gardens, and then went home.

After the meet up, I spent two months finishing contracts and started my Happiness Rotation. A happiness rotation is three weeks of working on the WordPress.com support team to get in touch with the problems end users are facing. Every Automattician has to go through a happiness rotation as part of their trial.

Working the happiness rotation was hard. When I say this, I don’t mean it was an insurmountable task. I had a full-time Happiness Engineer available 24/7 to ask any question I wanted, a week of walkthroughs, supervised working, mountains of documentation, pre-written examples, and slack channels with friendly supportive people. I knew what to do, how to do it, and I’ve done it before.

Despite this, I struggled, and VIP training began. Work at VIP fits into several sub roles that developers cycle through and training consists of a week in each role mentored by an experienced VIP Wrangler. Afterwards, we continue the cycle as full VIP Wranglers. Throughout the entire process, I had a general mentor for any and all things Automattic, be it mystery acronyms, or how to book a holiday.

At this point, I realized my job had grown in scope and felt insurmountable. I didn’t know what was going on and there was still much to learn. Combined with a torrent of new notifications, p2s, and emails, I felt lost. GitHub scaled from two to three emails per day to hundreds, P2 posts filled my other inbox, people asked difficult questions, and the sheer amount of activity at Automattic was overwhelming.

In the last few years, I viewed Automattic as my career end goal and suddenly I was there, years ahead of schedule. Not just that, I was struggling. I couldn’t grasp what was going on and I felt paralyzed in the face of work. I grappled with the thought that I was bad at my job, didn’t belong there, and that I wouldn’t last the next six months. I had this feeling that at any time, they were going to pull me into a call and say it isn’t working out.

A number of questions ran through my head. What would people think if they saw I left after the acquisition? Everyone’s treating it as a promotion and congratulating me. Maybe I’m not ready? I was handed a theme to review and struggling to read basic lines of code, mulling it over in my mind, why can’t I do this?

Sometimes I had the wrong window open and was reviewing my code but was so preoccupied, I didn’t realize it. Today, it takes me four days to review 6,000 lines of code in a theme but at the time, it took me two weeks to move through 1,000 lines.

The Catch Up Calls

It’s at this point that I was introduced to the bi-weekly catch up call. The team leads would chat with each person individually every two weeks to find out how they were, what they were doing, and what they’d like to do the following week. It was a chance to flag any problems and plan ahead.

I experienced nothing like this at CFTP or at any of my previous jobs and combined with the stalling work on the review, I panicked. My first catch up call was awkward and didn’t last long. My second catch up call didn’t go so well. I was at WordCamp Norway preparing to give a talk on WP The Right Way. I sat in a quiet room and received a call on a Skype from my team lead.

I felt as though I was put on the spot having to justify what I’d been doing the last two weeks, and trying to figure out how to spin weeks of panicking in front of a computer into a tale of bountiful code reviewing, pleasant Norwegian winters, and a smile.

Recovering From the Breakdown

Instead, I closed my machine and burst into tears. A few minutes later I opened my machine, apologized, and tried to explain what had happened. I was told they didn’t care how much work I was doing as long as I was learning and happy. A colleague picked up the review I was working on and noted that I was  thorough with the parts I reviewed.

My team lead, Steph, checked up on me every two to three days for the next two weeks to make sure I was okay and tried to find what kind of work I took to best. I spent time on deploys, then moved on to a long rotation doing code review so that I could focus on particular tasks and build my confidence.

While this was happening, another colleague asked if I was okay as he thought I was down. He introduced me to an internal slack channel called Bluehackers where other Automatticians who struggled could share their experiences. Seeing other people talk candidly about their problems made me recognize a lot of things I hadn’t considered, the most important being that I wasn’t alone.

I wasn’t the only one who struggled some days and failed to get anything done. I wasn’t the only one who panicked when faced with new or even familiar tasks. Everyone at VIP was friendly and supportive, not because they knew of my situation, but because they are nice people. One time, my technical lead sent me three family sized pies because we had a slack discussion on pudding.

Sometimes I don’t get anything done. Sometimes I struggle to do things I normally do effortlessly. Sometimes I turn off the video in calls because I’m still in bed. It’s 3PM and I can’t bring myself to get up, changed, and eat. There are so many projects I want to do. I have the knowledge, I have the resources, the support, the time, but they don’t get done, and it’s a struggle to explain why. Sometimes it’s things I know that need doing, like buying food or paying bills.

Confirmation Things are Working Out

A few months later I was in Seville at WordCamp Europe. Initially, I wasn’t going to go but decided I would regret it if I didn’t. I threw some clothes in a suitcase and purchased a flight. Large groups of people are scary, but I’ve found WordCamps tend to have familiar friendly faces mixed in. I can’t stress how big a boost it is to be able to see and make friends from event to event, yet still meet new people.

Before I left, I found myself with my former boss and now colleague. He asked how I was getting along at Automattic. He asked me this before, and I said, “It was rough at the start but I think I’m there now.” He told me that everyone else at the company thought good of me and that I was fitting in well. It might have been simple statement but it meant a lot to me.

A Bout of Impostor Syndrome

I had real moments when I went to sleep thinking I was going to lose my job, that I might not be cut out to be a developer, and that I didn’t deserve the things I had. But throughout the entire process, my team leads and my colleagues tried to support me. They placed my well-being first and they proactively asked if I was ok when they suspected something was wrong, and sought to put real solutions in place where they could.

They found other people with similar problems and tried to give me the ability to express what was happening, sharing their own problems coping, and what they were doing to keep on top of them. They gave praise and listened to good ideas, asked for help when they needed it, and they understood. Right now, I’m ok, but things have a habit of creeping up unnoticed, triggered by unexpected things.

I get anxious about food at WordCamps if I don’t know what’s being served, I’m uncomfortable in social situations, and at times I have problems gathering the energy to do day-to-day things, but I’m lucky. I have a good job, a nice family, a comfortable apartment, and interesting work. My problems are mild and I know others have it worse. Most people are going to pretend everything’s ok but everyone needs a little help.

Suggestions for Employers and Struggling Employees

Automattic has things in place to make sure Automatticians lead healthy mental lives. We have an unlimited holiday allowance, a small expense budget to make traveling easier (e.g. a pot of tea at an airport or a massage), team meet ups, sabbaticals, and many others. Matt Mullenweg doesn’t want Automatticians to struggle, we work hard and it takes its toll. Often, we forget that we have to take care of our emotional and mental needs and give ourselves time.

Consider creating your own internal Bluehackers group and give people avenues to express themselves when they need to. Make sure they’re happy, and that you care about their well-being more than their quality of work and output as reassurance goes a long way. Some companies have gone as far as setting minimum holiday allowances to force employees to spend time on themselves.

If you’re dealing with problems like these, talk about it. Talk to a GP/Doctor, a friend, family, whatever works for you. Talking is hard, but it’s necessary. If someone opens up to you, listen. Don’t try to offer solutions, don’t compare and contrast, don’t try to offer sympathy, don’t expect it to be sorted out in a month’s time. Simply listen as that person chose to tell you, so give them space and respect.

If you suspect someone is down, ask them if they’re ok and if you notice they bounce back, tell them, and tell them you’re glad! Highlight interesting things that happen, help them when they make a mistake, ask them when you make one yourself. But remember, sometimes all someone needs is a hug and a cup of tea to know that things are ok. Give them space, don’t ask for explanations, and let them know you’re there if you need them.