Peter Adams who runs the site WP Photog has published a rant against Photography based WordPress themes that is filled with interesting things to consider, especially for consumers. The rant covers a lot of familiar territory such as themes using Custom Post Types instead of built-in functionality, using plugins for functionality instead of building it into the theme and finally, bypassing the gallery shortcode generated by the core of WordPress.

However, what I think is really going on here is that many of the proprietary workarounds found in these themes are trying to make up for the usability issues that new users face when starting out with WordPress

Peter says something in his post that I wish all theme designers/developers would get back to doing. “Keep Theme code dedicated to design and layout – not proprietary functionality.“ Many of the complaints against Photography specific themes are similar to the complaints Justin Tadlock mentioned in his ThemeForest experiment.

From a consumer standpoint, Justin’s experiment proves how important it is to pick the right theme that won’t lock you in. I can’t imagine the common user knowing about shortcodes, post types, etc and factoring those into their decision on which theme to buy. As has been the case for a long time, choosing themes is like walking down the street looking at each storefront window to see which one looks best. Between all these dependencies with shortcodes, etc. someone could really screw themselves by investing time and money into a theme that does everything wrong.

I feel like WordPress themes have gone through a giant cycle. A few years ago, themes contained awesome features that manipulated the display of content. Features that could have existed as plugins but were built into themes. Now we’re on the other side of the cycle where there is demand for theme developers to get rid of all the extra fat found within themes and to get back to the basics of the KISS principle (Keep It Simple, Stupid). While progressing through the cycle the WordPress theme ecosystem has become filled with themes that make a consumers life a living nightmare. 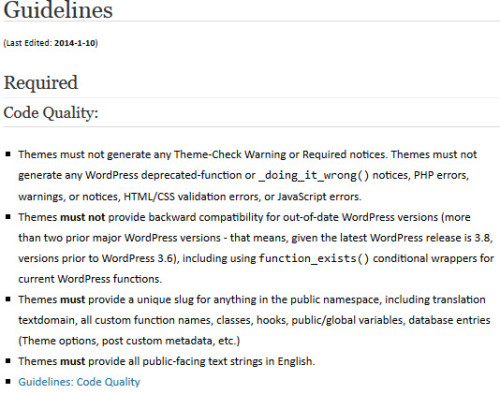 Justin Tadlock is doing his part to change things for the better. He joined the WordPress Theme Review team and is working with other members of the community to help straighten things out. But themes hosted on WordPress.org are just a tiny drop in the bucket compared to the commercial theme market, which doesn’t always follow the same theme guidelines. The WordPress theme world has dug themselves a deep hole that they might not be able to get out of. The unfortunate aspect in all of this is that consumers are the ones who lose the most.