Postmatic publicly launched its email-based commenting service today and is now officially out of beta. The free plugin aims to increase comment engagement by allowing readers to subscribe to new posts/comments via email and leave comments by simply hitting reply.

Postmatic also launched a commercial service alongside version 1.0. For $9/month customers can add additional features, including guaranteed mail delivery for thousands of subscribers, fully responsive HTML email for posts and comments, support for oEmbed and shortcodes, and the ability to moderate comments from your inbox.

The Challenges of Sending Bulk Email

Since Postmatic is critically dependent on email delivery, founder Jason Lemieux and his team didn’t want to hassle with attempting to send it themselves.

“Sending bulk email is really difficult to do correctly so we’ve partnered with folks that have already solved it,” he said. “All posts, comments, and otherwise are sent through a combination of both Mailgun (by Rackspace) and Mandrill (by Mailchimp).

“This takes all of the uncertainty out of the equation and makes sending WordPress content to lists of tens of thousands of subscribers as easy as pie. Users don’t need to sign up for accounts with these services, change their dns or anything – we handle it all for them.”

Lemieux reports that Postmatic had 1,200 sites in its beta program, ~500 of which they considered highly active. The individual installations were the easy part of the beta. Supporting the subscribers, which are more numerous, was the greatest challenge the team encountered. 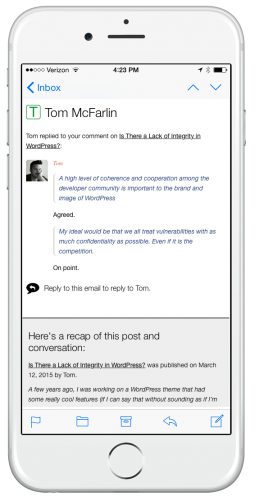 “During beta we delivered posts and comments to roughly 46,000 unique subscribers and processed nearly 15,000 incoming comments,” he said. “These numbers are pretty small so we’ve built a system that scales and are ready to open the doors to everyone.”

Notifications sent from Postmatic are two-way transactions designed to invite further discussion in comments, so the team has to be able to adequately support the myriad of email clients that people are using.

“Email is complicated and as old as it is, it still seems like the wild west in a lot of ways,” Lemieux said. “We have to make sure that the post being delivered to an old-timer using Pine on his home-built Linux box communicates ideas just as well as the same post when seen in Gmail or on an Apple watch. Then we have to accept comment replies from all of these sources as well, which it turns out you can do. With a watch. Leave a comment. Go figure.”

The Future of Postmatic

Postmatic is a micro-startup that is mostly self-funded. Approximately 10 months before starting, the team knew that they wanted to be ready to quit their jobs when the time came.

“We were fortunate to be able to squirrel away much of the funding we needed while also building it in tandem with our usual client work,” Lemieux said. “When we entered beta last fall and saw the reaction people were having to commenting by email we chose to stop taking on new client work, bring in a small amount of private funding, and go at it full time.”

Postmatic’s tiny four-person team is what made this possible. Two members are full-time and the other two are currently part-time.

As part of their quest to seamlessly join email and commenting, the team deemed it important to launch with importers for Jetpack, Mailpoet, and Mailchimp. This makes the transition easier for site administrators who are already hooked into more traditional comment subscription services. Postmatic also has a few more high priority items on the roadmap.

“The first is to support sites with high publishing frequency by enabling digests,” Lemieux said. “We have some fantastic ideas about how to do this in the new world of email commenting that will be of huge benefit to publishers and readers both.

“As we move into the world of professional publishing we’ll also need a diversity of templates. Rolling in a template library or template builder is the plan there. Both of those things are next on our list.”

The team behind Postmatic is investing heavily in 100% email commenting because they believe that innovation in WordPress comments is long overdue.

“Every comment system needs email to some degree,” Lemieux said. “Livefyre, Disqus, Jetpack – all send an email notification (if subscribed) that a new comment has been posted. But you still have to jump over to a blog to reply and post a comment. It’s not always possible to do so, nor is it easy on mobile – which has become so important.

“Postmatic takes that out of the equation – notification leads to reply, leads to blog comment, in one seamless action. Why wouldn’t you want email commenting to work like that?”

Email commenting and post notifications are available in the free plugin, but these features are just the beginning of how Postmatic is aiming to revolutionize WordPress commenting.

“The debate about the usefulness of comments in WordPress rages on while email marketing and automation has become a very hot area,” Lemieux said. “But really the WordPress comments system is an email automation platform just waiting to happen.”

If you’re curious about what it’s like to participate in comments without ever leaving your inbox, Postmatic has a live demo available where you can try it out.