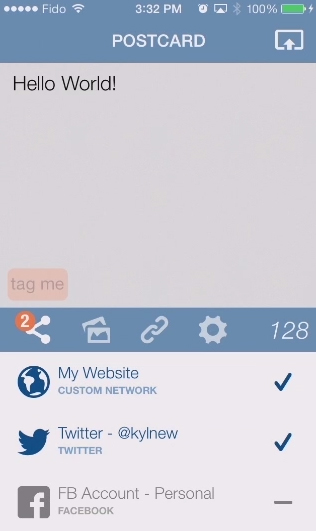 Kyle Newsome, creator of Postcard, announced over the weekend that the project will be discontinued. The free social sharing app for iOS launched in February of 2014 with the aim to make it easy to share content from your phone to multiple social networks, including your own website.

Newsome also built a free WordPress plugin as a companion to the app to allow users to host and archive their data. He intended it to help users make sure their websites didn’t go stale as they regularly posted short form content to social networks.

Unfortunately, the idea did not catch on as Newsome hoped it would and he was unable to keep up with the maintenance.

“I’ve fallen behind on maintenance and, due to some sweeping new policy changes in Facebook’s platform as of May 2015, the live iOS and Android development versions are broken and it’s been the final kick in my ass necessary to admit Postcard is unsustainable,” he said.

In Postcard’s post mortem, Newsome identified changes to external services and their APIs as one of the primary factors for discontinuing the project.

Postcard was an interesting project for me. It started from a frustration with ever changing policies and lack of standardization in social media and ironically will be shutting down for exactly the same reasons. I really have to say that social media management is a tough thing to tackle for any single developer. It’s hard enough to depend on code that you didn’t write yourself and it’s even harder to depend multiple on APIs. It takes a lot of maintenance just to stand still.

Keeping the WordPress plugin updated was also a challenge, and Newsome was discouraged at the prospect of having to rebuild it in the near future.

“The WordPress plugin also got stale as a major update and even a new forthcoming JSON API made the custom work I had done seem like a large investment made in something soon to be obsolete,” he said.

Additionally, he found that the costs of maintaining the app, both financially and in terms of time spent, were unsustainable, as the app only pulled in a total of $750 over the past year. This barely covered the app store licensing fees.

Newsome has no intention of maintaining or developing the mobile apps or the WordPress plugin anymore. The apps are now available on GitHub under the MIT license with broken/partial functionality:

All the code is available to any developer who wants to take the original Postcard idea and run with it or modify it to suit another purpose.

“I don’t want to be that developer who never admits their project is over when it’s over,” Newsome said. “Both myself and my users deserve better.”

He hoped that Postcard would fundamentally change how people use social networks, but the idea of having your WordPress site as the host network for your social content never really caught on. Since many people do not host and maintain their own websites, the golden feature of this app probably went unused by the majority of those who tried it. The ability to broadcast the same content to multiple networks was likely the more popular feature. In the end, the Postcard iOS app was downloaded just 6,000 times.

Postcard’s failure may be an indication that people are still not ready for decentralized social networking, where you host your own data and distribute it to third-party social networks at will. Given that the project was powered by a one-person team (a developer who is otherwise employed), Postcard had little chance of being able to keep pace with the development burden of external networks and their changing APIs.

Newsome may not have launched it with enough resources, or it may not have been the right approach or the right time. Multiple factors combined ultimately spelled Postcard’s doom, but if any interested parties have the vision and time to revive it or fork it, Newsome is happy to assist in any small way. You can contact him directly via the Postcard post mortem blog or on Twitter.