WordPress’ iOS and Android apps will soon be getting a new editor. The appearance of the new editor, codenamed “Aztec,” is very similar to the old one but is light years ahead of its predecessor in both speed and reliability. Aaron Douglas, iOS engineer at Automattic, announced the open beta for Aztec today with a side-by-side comparison video of the old and new editors. A copy and paste test with 500 paragraphs on iPhone 6s demonstrates Aztec’s instantaneous response while the old editor takes two-minutes to render the text.

In addition to better speed and performance, Aztec’s use of OS-provided text controls makes it possible to offer full support for accessibility technologies like iOS’ VoiceOver and Android’s TalkBack. It also adds the ability to draft using dictation.

Aztec introduces a new undo/redo tool at the top of the screen as a quick option for fixing mistakes. It also provides a simpler, more reliable experience using spell check. 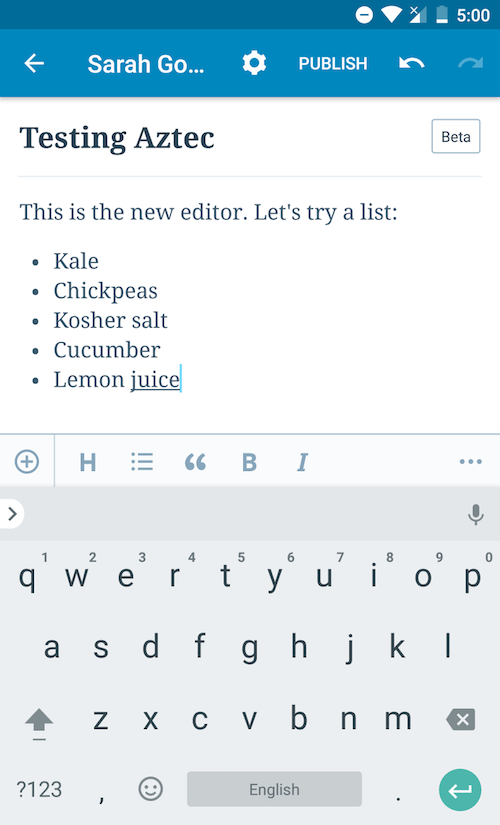 The Aztec beta is available to all users in the latest updates of the app (8.0 for iOS, 7.8 for Android). After opening the app you will see a popup for enabling the new editor. It can also be toggled on/off by going to Me > App Settings and selecting “Set the Editor Type.”

The mobile team has made it easy to test and give feedback without leaving the app. Tapping the “beta” button at the top of the editor will open a “What’s New in the Beta” page with a bug button at the top that you can use to report bugs and send feedback. At the moment, the beta does not support shortcodes or video and WordPress gallery features. Keep in mind that it’s not 100% ready for use and heavy users of the mobile apps are likely to discover glitches.

Aztec is open source (GPL 2.0) and packaged as a rich-text editor component in its own GitHub repository (iOS | Android) so that developers can use it in their own applications and contribute code back to the project.

“Quite literally, there is nothing like this out there – every editor we could find uses a web view or has very limited support for any HTML,” Douglas said. “Our hope is the Aztec editor is seen as a component that can be used by many iOS and Android apps to provide a rich HTML editing experience. We feel that we could garner a bigger contributor base to the mobile apps simply because this component exists, is free and open, and is super awesome.”

The project is a few months behind the schedule published in April, which had open beta targeted for May and the full release for the end of this month. Depending on how well the beta testing period goes, users could see the new Aztec editor included in the mobile apps within the next few months.