The team working on integrating Gutenberg into WordPress’ mobile apps is making progress, but users will not have access to the new editor in the apps until early 2019. Jorge Bernal, a mobile engineer at Automattic, posted an update yesterday, highlighting current capabilities:

Gutenberg Mobile [is] working inside the apps and the first post published with it, the writing flow has improved so it’s starting to feel more like an editor and less like a collection of isolated blocks, we have a working toolbar in place, you can now select images from your media library.

If you are using one of the mobile apps and you attempt to edit a post that was created with Gutenberg, you will see a warning like the one below: 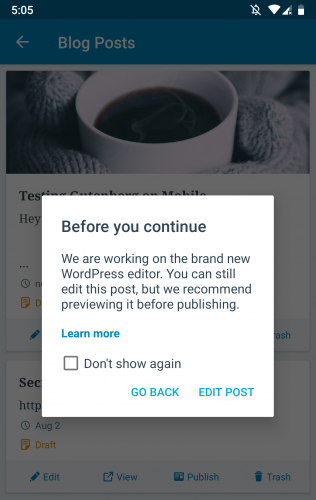 This doesn’t mean users cannot edit content in the mobile apps, but there will be inconsistencies while Gutenberg support is still in progress.

I created some posts with Gutenberg and then went to edit them in the Android app. During my tests of switching back to the Gutenberg editor after saving some changes in the mobile app, I found that Gutenberg included the content but not the formatting options I had selected in the app. I received a warning about unexpected or invalid content.

The mobile apps team expects to ship an alpha release to testers at the end of 2018, with basic capabilities like adding a heading, paragraph, and images from the media library:

We will have an alpha release at the end of the year that will showcase the editing flow with some selected basic blocks. We will have a basic integration with the apps, enough to be able to experience Gutenberg (via secret opt-in or special builds), but won’t be showing this to users. Being able to use early versions of Gutenberg directly in the apps will make it easier to gather feedback and do user testing.

A beta with support for the most common types of content is tentatively planned for February 2019. The team is aiming to make writing a post using Gutenberg Mobile as pleasant as it currently is with Aztec.

“As Gutenberg rolls out to users on the web, we might see a good amount of users hitting problems trying to edit Gutenberg posts on Aztec,” Bernal said. “We have done (and keep doing) a lot of work to try to make that as good as possible, but there are limits to how compatible we can make the existing editor. We want to reduce the gap between Gutenberg launching and having a version in the apps, so we’re adjusting scope a bit to ship in February.”

It will be interesting to see how Gutenberg support is presented in the apps. I imagine it will be challenging to improve upon the mobile apps’ current editing experience, which is already fairly intuitive and streamlined.

Users can follow along with the process and give feedback on the Gutenberg Mobile GitHub repo.