Earlier this year, Hookr.io entered beta with a new UI and support for 800+ plugins and themes. The site provides a WordPress hook/API reference for developers, but creator Christopher Sanford has a vision to do much more with it in 2016.

Today Sanford announced the release of the new official Hookr plugin, which is available for free. It displays the actions and filters that fired as the page loaded.

Hovering over the indicators and clicking through to a specific hook will show its details, including the tag, invoker, description, and value. 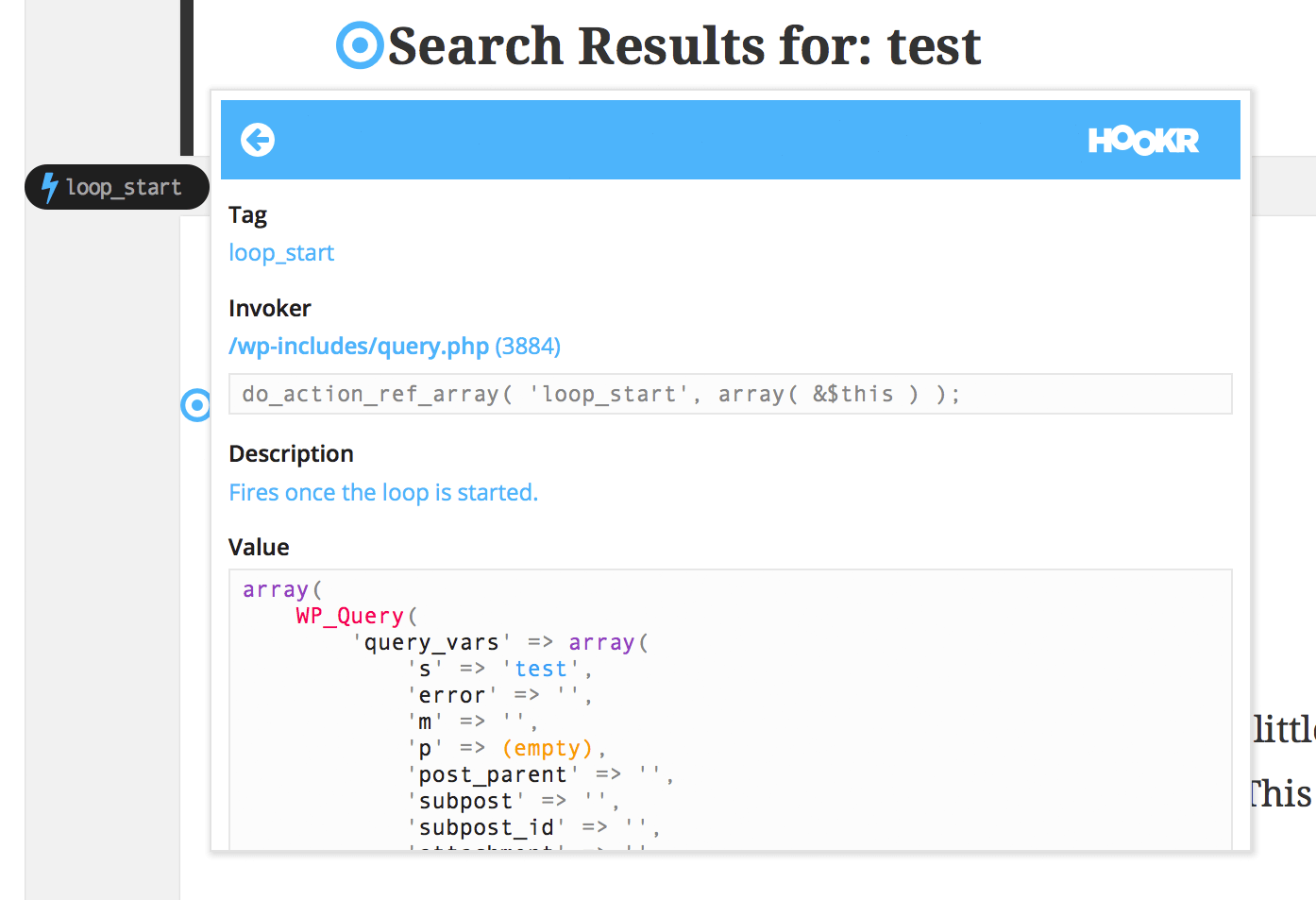 The plugin also includes a built-in Lucene search engine for super fast filtering from the admin bar. Developers can tweak the default Hookr settings to ignore or watch hooks with wildcards. The plugin is easily configured under the Tools menu.

Sanford began working on the official Hookr plugin a week before WordCamp US.

“I wasn’t sure if it would actually be useful– but I showed Zac and a few others and they seemed to like it,” he said. “So I pulled an 18-hour bender in Philly to get it nearly complete.”

The plugin has been beta tested for the past two weeks and is now stable and ready for use. As it’s geared purely for development, it should not be installed on a production site.

During the past year Sanford has been steadily adding plugins at the request of users, including Pods, WP E-Commerce, Caldera Forms, and others. He hopes that commercial theme and plugin developers will get on board so that he can host their APIs as well.

“I have done some substantial reworking to the parsing engine – it now tracks discrepancies between the source code and the documentation,” Sanford said. “This will be something that I will be offering as a service as well.

“In the short term (by the end odf Q1), I plan to keep refining the parsing engine, adding plugins, and working on features users actually care about,” he said.

“I will be launching the API site that will be piloting around the same time. I will be working with the Rocket Genius (Gravity Forms) guys to provide realtime data for their premium plugin.”

After those initiatives are released, Sanford told the Tavern that he’s going to focus on creating native IDE plugins for Atom and Sublime.

The Hookr name and branding has been controversial with a few who find it off-putting and offensive. Sanford considered changing the name but has now decided to keep the original brand.

“The market is flooded, it’s a short, memorable and established brand,” he said. “On numerous occasions, individuals have used the term ‘unfortunate’ to describe the name. If it’s so offensive, then why do my usage and followers keep increasing? The people complaining are not paying my bills, nor are they even relevant users of the resource. Simply put, their opinions mean nothing to me.”

Sanford has wrestled with the name change and has even purchased numerous alternative domains but nothing felt right. He will soon be launching a swag line with tees, mugs, stickers, and any product that will help him to pay for hosting Hookr.io.

“At WCUS, I decided that either I could limp Hookr along, or I could make it undeniably a fixture in the WordPress ecosystem,” he said. “I decided on the latter. And that is exactly what I’m doing with offerings such as the Hookr plugin.”