Last April, Christopher Sanford launched Hookr, a WordPress hook/API reference for developers. He initially wrote the parser/indexer for his own use, to improve efficiency in his work, and was inspired to make it a public resource.

“I have been professionally working with WordPress since 2.8, but most of which I would describe as ‘superficial development,’” Sanford said. “It wasn’t until later, roughly WordPress 3.5, that a large-scale WordPress project came along.

“I found myself spending an obscene amount of time either digging through code within my IDE, or performing countless Google searches, in order to uncover/understand various hooks, functions, constants etc. So, I wrote a plugin that would index the application/site it was installed within– this was the first iteration of Hookr.”

As a developer whose career is not based in the WordPress ecosystem, Sanford didn’t know what to expect when he tested the waters with his new public resource for developers. After several months in alpha, the traffic and feedback were enough to convince him to invest in performance improvements and an overhaul of the UI.

“The alpha version of the site was truly alpha – the UI was a complete afterthought, there were many UI bugs/hiccups, the navigation was not cohesive; it was a hot mess,” Sanford said. “Prior to the beta, I had not updated hookr.io for months, which was purposeful. I wanted to see if the traffic would completely level-off, or if it would remain consistent, with the latter being the determining factor as to whether or not I would continue with the project.”

Sanford was surprised and encouraged to find that usage of the site was solid and continued to grow. He spent the next three months fixing issues, rewriting core parts of the parser, and refining the UI to focus on features that people actually needed. The site has now entered beta with a slew of noteworthy improvements:

Index screens are infinitely-scrollable and filterable, which cuts down on a lot of clicking through endless pagination. Hook details have been refined to follow a format similar to PHP’s detail pages and include annotated code signatures and descriptions. 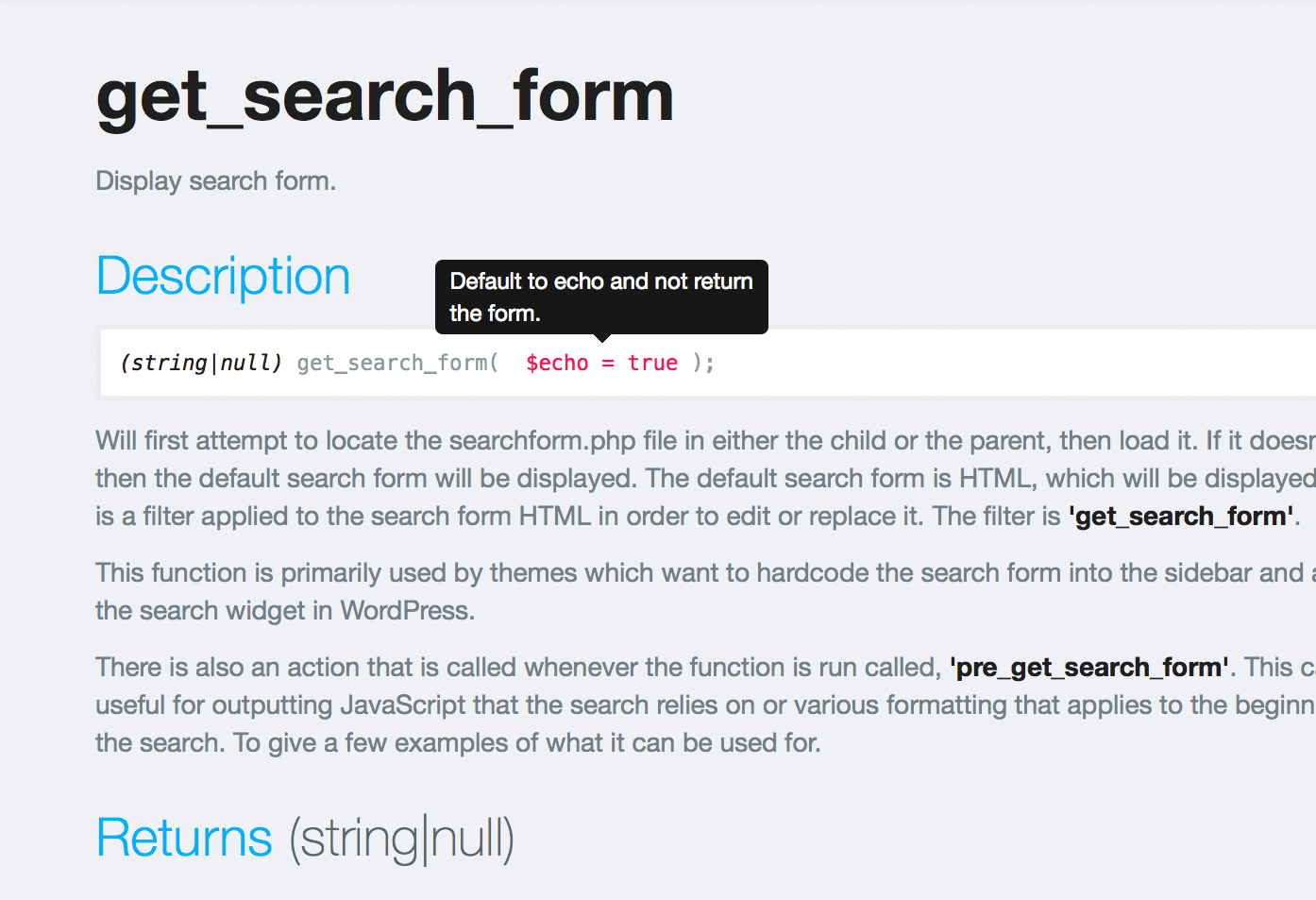 In addition to the basic info about the file and lines where the code/object is defined, Hookr has also been updated to display any related hook callbacks sharing the same tag name or signature. 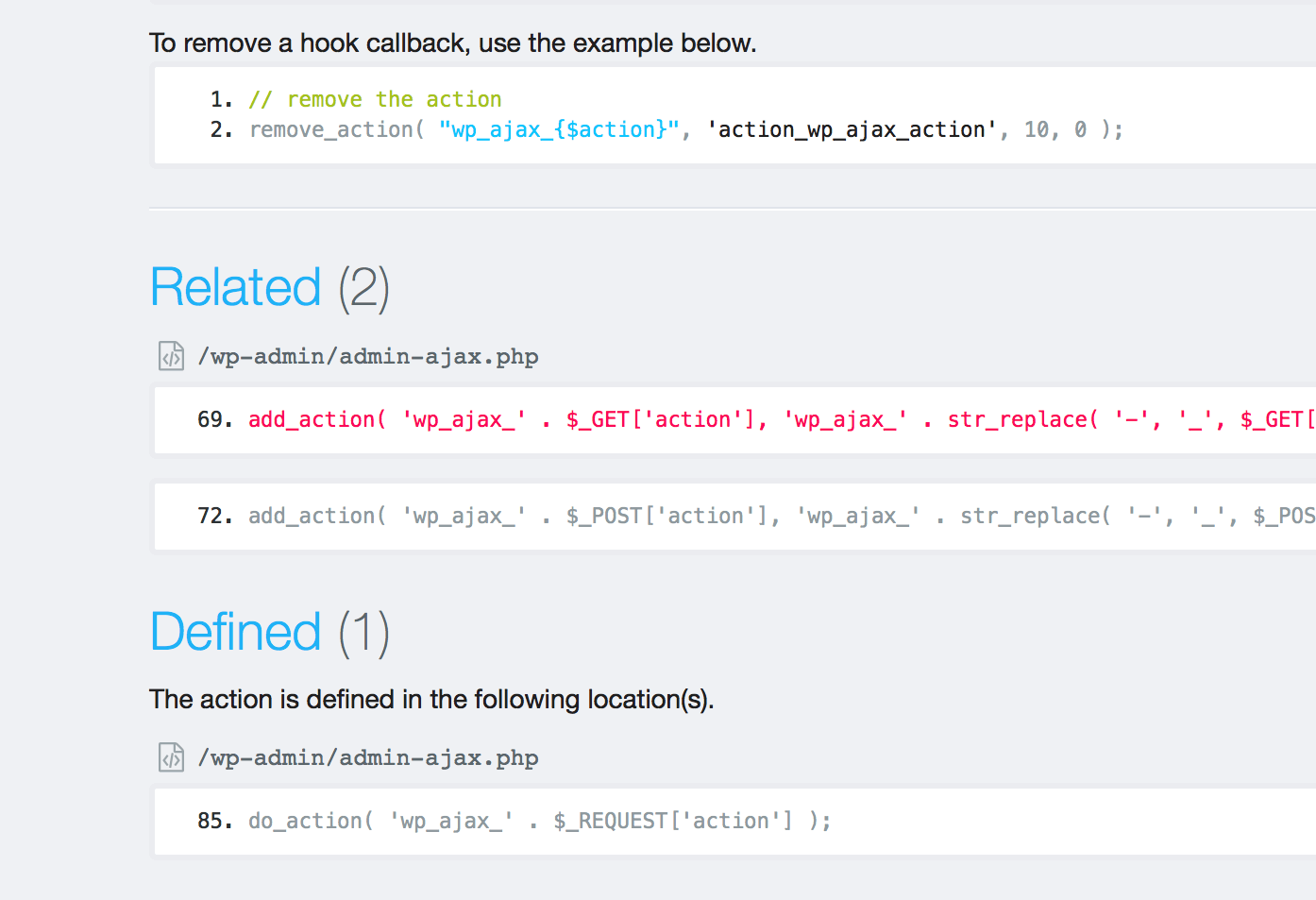 To Rebrand or Not to Rebrand?

Many of those in search of a comprehensive hook/API reference find Hookr to be easier to use than the official WordPress.org code reference. Sanford has experienced friction from creating what some perceive to be a competing resource.

There were several people that have/had an issue with the resource even existing. For the sake of full-disclosure, my career is outside the WordPress ecosystem; it is simply a platform I use (and love), not a lifestyle.

My experience with the ‘community’ has been mostly positive; many people love the resource, while others are indifferent. I wrote Hookr to aid legit designers/developers/agencies, not hobbyists masquerading as designers/developers who have no skill besides martyrdom and nothing positive to contribute.

The Hookr name has also proven to be controversial, as a few vocal opponents find it to be off-putting and offensive. Sanford said that he is very much torn over rebranding the site but is open to the idea.

“The WordPress market is saturated – it is hard to make any sort of impact, hence the name,” he said. “The name is short, controversial, relevant, and memorable – either people love or hate it, of course. It was never the intent to insult, offend, or alienate any demographic.

“If people are uncomfortable saying “Hookr” in an open forum, then maybe it’s time to put my personal ethos aside for the betterment of the resource. That being said, I am on the fence in regards to renaming/rebranding Hookr. If I do, it’s only to remove the initial barrier/stigma and promote usage.”

As the site is still in beta, Sanford is still collecting feedback from users but is concentrating on features, fixes, and SEO. If he decides to rebrand, it will likely happen as the site moves out of beta.

The Future of the Hookr.io Resource

After streamlining the design, removing a few features that no one used, and refining those that worked, Sanford reports that so far users are enjoying the beta version of Hookr.

“The feedback I have received has been exceedingly positive,” he said. “The usage has effectively doubled.” User suggestions regarding the search functionality are shaping the roadmap for the next iteration of the resource.

“The current search implementation is more or less a filter mechanism, which is effective once you’ve drilled-down to the relevant index,” Sanford said. “However, numerous users have asked for a traditional ‘global’ keyword search that spans core, plugins, and themes. The global search, along with a few other features, will be released within the next month or so.”

While Sanford is committed to keeping the resource free for anyone to use, he is exploring a few long term options for monetization.

“Cluttering the interface with ads is not something I want to do, but never say never,” he said. “However, there is another opportunity for monetization.”

In the future, Sanford is looking at the possibility of establishing the infrastructure to offer Hookr (SaaS) for commercial theme and plugin developers.

When I released Hookr Alpha, a few people inquired about using it to augment the documentation of their premium plugin/theme. I wasn’t confident that it was a true ‘value-add.’ Over the course of a year, I’ve refined the parser and data objects to a point of viability.

A SaaS model for monetization would allow Sanford to offer developers pre-generated documentation with their themes/plugins. He is also exploring the possibility of offering the raw data in JSON, XML, CSV, etc. to vendors to implement an API microsite.

For the time being, Sanford will continue investing time into improving Hookr as a reference and refining features according to user feedback. If you use Hookr.io regularly, feel free to offer your suggestions in the comments and follow the project on Twitter for all the latest updates.