Shortly after Jetpack 4.0 was released yesterday many users reported a fatal error and/or white screen when updating. Developers started warning each other in the Advanced WordPress Facebook group to avoid updating to 4.0, after having received emails from clients with sites that went down. A followup 4.0.2 release was pushed out today for users with the specific configuration that caused the fatal error.

This is the third time in under two months that the Jetpack team has had to send out a followup update on the heels of a release to correct significant problems. Fortunately, the team worked quickly to get a fix out to sites with fatal errors. 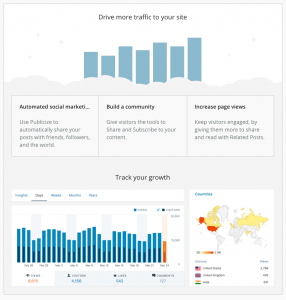 This release introduces a full page explaining the benefits of Jetpack to encourage users to hook it up. It also displays a picture of the development and support team, an explanation of Photon, and the benefits of the Protect module.

Version 4.0 also adds a new editor view for VideoPress that lets users edit the shortcode in the editor with a new modal options window. This makes it easy to wrangle VideoPress settings directly in the editor

A few other notable enhancements in this release include:

Jetpack 4.0 also adds performance enhancements for the Protect module and Contact Forms. The method it uses to clean the database of spam form submission records is now more efficient. Check out the changelog to see a full list of all the enhancements and fixes in this release. It should be safe to update your sites and clients’ sites to 4.0.2 without any ill effects.

17 responses to “Jetpack 4.0 Released with UI Improvements and New Editor View for VideoPress”