If you’ve ever wondered how well an open source project is maintained, you now have a quick way to get an overview, without scouring the project’s issues queue or trying to infer something based on its release history. Is It Maintained? is a new web app that allows you to check the activity of open source projects by plugging in the URL of its public GitHub repository. 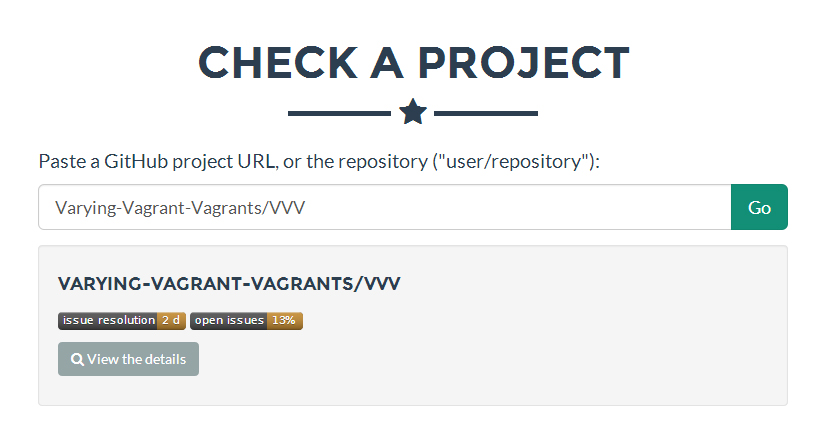 In this example, we’re checking up on Varying Vagrant Vagrants. The output displays the percentage of open issues and the median closing time for issues.

Previously, Matthieu Napoli, the app’s creator, had considered using release frequency and last commit date as metrics, but dropped those ideas given the difficulty in determining what constitutes a “good” or “bad” frequency. Currently, the Is It Maintained app measures how well a project is maintained, based on analysis of the following metrics mined from the project’s repository:

It’s important to note that not all issues in the queue are taken into account. The app ignores issues from collaborators as well as ones with labels like “feature”, “enhancement”, “duplicate,” etc.

In the future, Napoli is considering adding “reactivity” into the metrics, which would measure the average time for issue acknowledgement (i.e. first comment after the issue was open).

Browsing the site, you can see projects recently analyzed along with the most popular projects that have been checked. The app can be particularly handy for checking up on a library or framework before building on top of it. Obviously, it only works with open source projects that use GitHub for their central place of development.

Measuring whether or not a project is maintained is not an exact science, but Napoli is committed to improving the app, which is still in alpha version. He’s open to suggestions and contributions to the project on GitHub. Do you think there’s any set of metrics that can ever provide a reasonable approximation of how well an open source project is maintained?