When the News of Pelham became another casualty of the blighted newspaper industry, student journalist contributors lost a platform for their voices to be heard. Their advisor, Rich Zahradnik, called a meeting to address the paper’s closure. More than a dozen middle and high school kids showed up and decided to start their own paper: The Pelham Examiner.

Zahradnik is a former journalist who has been volunteering for years in the local elementary schools, teaching kids how to write news stories. Before the News of Pelham shut down he was acting as a liaison to recruit student contributors. He registered the Examiner as a corporation and the paper is also part of the New York Press Association.

The Pelham Examiner is an online-only publication that covers everything from local politics and crime to sports and entertainment. It is running on WordPress, using plugins like All-in-One Event Calendar and WP Polls to enhance students’ stories. The site uses the FLEX WordPress Theme by SNO, an organization that sells publishing solutions for scholastic news programs. 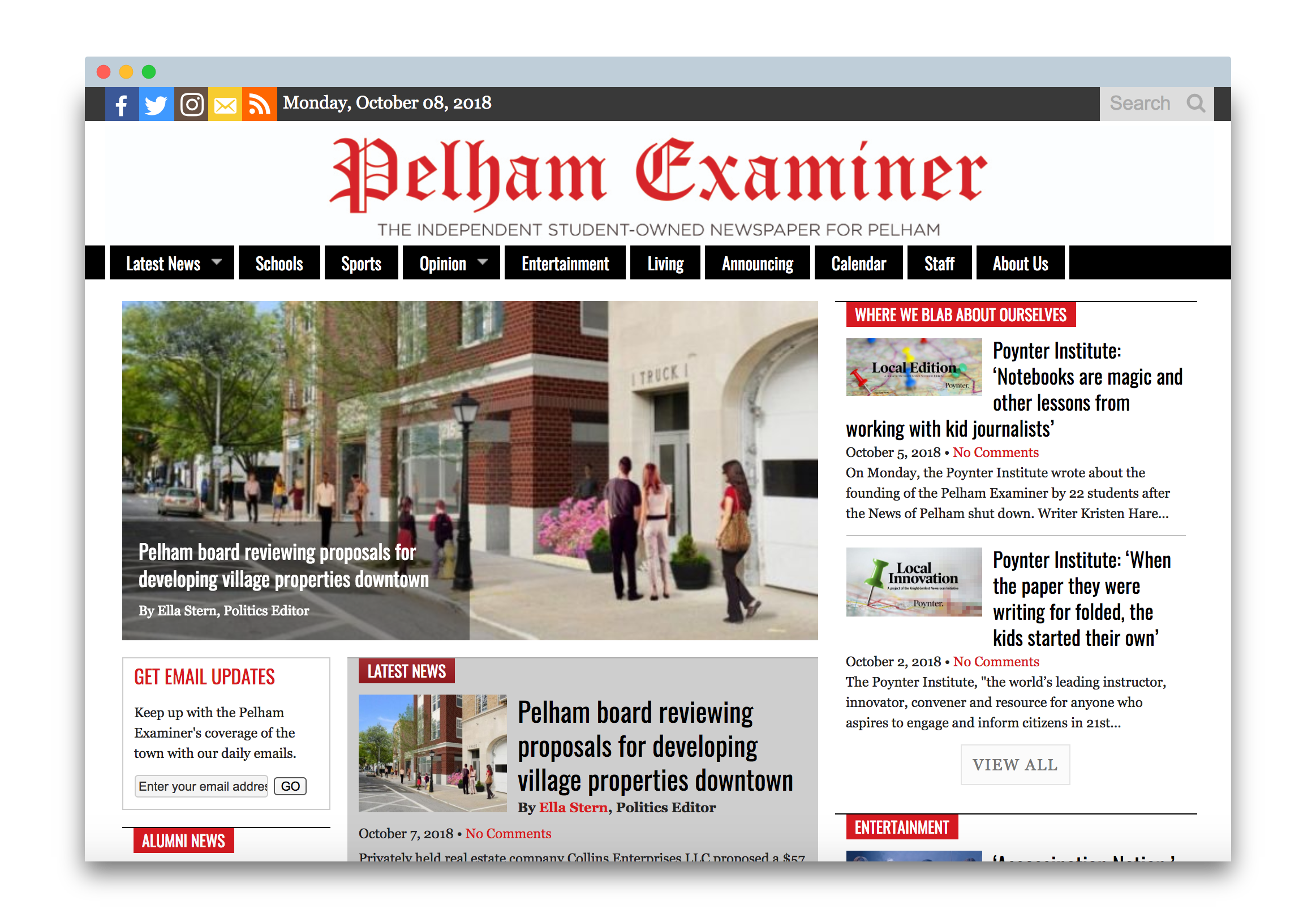 WordPress provided a cost-effective way to launch a student-run newspaper and students also found it to be intuitive for publishing.

“We chose to use WordPress mainly because of the ease with which we could use it and create a website look that worked for our goal,” Executive Editor Ben Glickman said. Zahradnik had used the platform with prior publications he had worked on with students at Colonial Elementary School.

“Several of the students who had worked on The Colonial Times loosely remembered some aspects of WordPress, but most of us had to learn from the beginning,” Glickman said. “I started with the basics (creating new articles, saving drafts, etc.) and worked my way up to the more complex stuff.” Most students contributing to the Pelham Examiner didn’t require much training to get up to speed with publishing articles.

“Personally, I thought that much of WordPress was rather intuitive, so learning was not too hard,” Glickman said. “I haven’t had any problems with WordPress so far. I’ve been especially impressed with how easy it is to integrate all kinds of story elements into a given story.”

Poynter published a story last week about the enthusiastic and highly motivated group of young journalists behind the Pelham Examiner. For now the publication is self-sustaining with volunteer contributions, but Zahradnik told Poynter that he is open to ads or investors in the future.

Sustaining the news as a business is another skill the students will need to learn as the publishing industry is increasingly demanding more creative revenue models from journalists who want to work independently. Zahradnik told Poynter that the Pelham Examiner’s student-owned online paper could be a model for other places that are no longer able to support traditional local newspapers.

The News of Pelham was a bi-weekly, print-only publication before it closed its doors. With a WordPress-powered website, students can get the news out faster, publishing every day with virtually no overhead costs.

“I think the model for the Examiner is absolutely reproducible,” Glickman said. “For the relatively small price of a startup fee and annual hosting and support fees, you can essentially have the same type of town or city coverage with a conventional town newspaper.”