Anders Norén has added Gutenberg support to his popular Hemingway theme in the latest update, version 1.66. The theme has a simple, timeless design that appeals to both bloggers and business owners alike. It is active on more than 30,000 websites and some of those site administrators are using Gutenberg.

What does Gutenberg support look like for Hemingway? Norén styled the editor to match the front-end design, with the same colors and fonts. He also added support for specific Gutenberg blocks, such as cover images, full-width elements, and pull quotes. 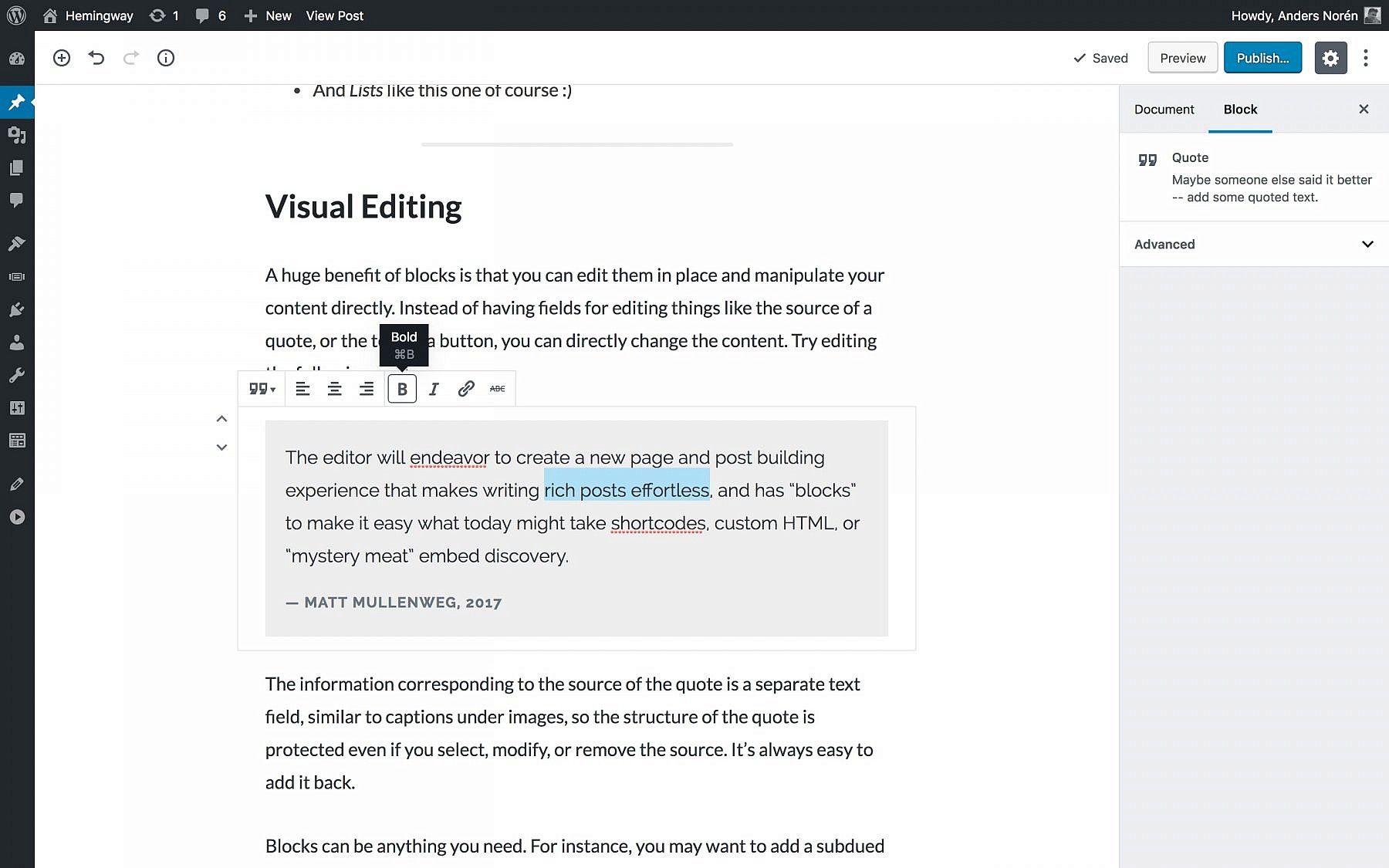 Norén said he knew since Gutenberg was announced that he would need to add support to all 17 of his themes in a substantial update at some point but had put it off because developing for the new editor felt “like aiming for a moving target.”

“I don’t think it was any single thing that made me realize that I needed to get going with Gutenberg, but rather that the Gutenberg volume knob in the community has been turned up at a steady pace,” Norén said. “After the ‘Try Gutenberg’ prompt in 4.9.8, I also started to receive a lot more support requests regarding Gutenberg. When regular WordPress users – not developers – started to ask when they can expect Gutenberg support in my themes, I knew that I couldn’t push it ahead of me much further.”

Hemingway is the first of his themes to support the new editor and Norén is aiming to have his entire collection Gutenberg-ready by the time WordPress 5.0 is released. (This does not include the Hemingway Rewritten version, which was created by Automattic and is available on WordPress.com.)

Norén sees the new editor as a significant improvement over the current editor and said he thinks it is the right way forward for WordPress.

“It’s always easy to speculate about the road not travelled, but the Visual Editor needs replacement, and Gutenberg will be a good replacement for it,” he said. “It’s better at everything the old editor can do (except editing raw HTML, perhaps), and it also brings with it new possibilities for WordPress developers and users. There are a lot of issues in Gutenberg still to be worked out, but when they are, I think Gutenberg will be a big step forward for the WordPress community.”

Norén said his chief concern is not about the editor itself but about how WordPress will handle the transition period for users, especially for those who would benefit from continuing on with the Classic Editor.

“I hope that the upgrade notice for 5.0 will be accompanied by clear messaging around the changes included in 5.0, along with the option to install the Classic Editor in Gutenberg’s stead,” Norén said. “Similar to the ‘Try Gutenberg’ prompt, but presented more clearly as an either-or option before the user actually updates to 5.0. It was encouraging to see Matt Mullenweg say that the Classic Editor will be maintained for many years to come.”

Norén’s 17 free WordPress.org-hosted themes have an estimated 100,000 active installs. Those using his products can be confident that the author behind the themes has Gutenberg-support among his immediate priorities for updates. Users who opt to move forward using the Classic Editor should not notice a difference in how the themes work.

“I hope that Gutenberg is received with excitement and widespread support when 5.0 is finally released,” Noren said. “I also hope that the WordPress team does whatever it can to make sure that end-users don’t feel ambushed by the new editing experience.”