Headway Themes, founded in 2009 by father-son duo Grant Griffiths and Clay Griffiths, is one of a handful of companies that helped pioneer the WordPress commercial theme market.

Headway is not a page builder but rather a visual drag-and-drop layout builder for WordPress. In the past few weeks, several readers have contacted us wanting to know what is going on with the company.

In July, a disgruntled customer published a post on the WordPress Subreddit warning people not to purchase Headway. In the post the customer suggests boycotting the company alleging, it vanished from customers by not communicating and releasing timely updates.

The post generated more than 30 comments. A day after it was published, Clay Griffiths responded to the thread thanking people for their concern.

He acknowledged the lack of communication and states that Headway 4.0.7 will be released by the end of that week to address common bugs reported by customers. He also clarified that he is the sole owner of Pressmatic and that it’s not associated with Vesped Inc., the parent company of Headway Themes.

“Just so I’m clear, I had no intentions of leaving Headway or abandoning it. Headway has made up 30% of my life (7 out of 23 years). I will never cease to have a vision for improving Headway,” Griffiths responded when questioned about his future with Headway Themes. Headway 4.0.7 is now available, two weeks after its promised date.

Headway Customers Complain of a Lack of Communication

One of the most common complaints expressed by customers is the lack of communication. The last post published on the company’s blog was on May 9th, 2016. The company’s Twitter account has been somewhat more active with a pinned Tweet on June 15th advertising GravityForms and a reply from Grant Griffiths to a user on July 7th.

The last post on the company’s Facebook page is on May 2nd announcing the release of Headway 4. The duo was scheduled to appear at a special event during WordCamp Oklahoma City but ended up not attending. Headway’s support forums quickly filled with posts from concerned customers asking if the company had gone out of business. 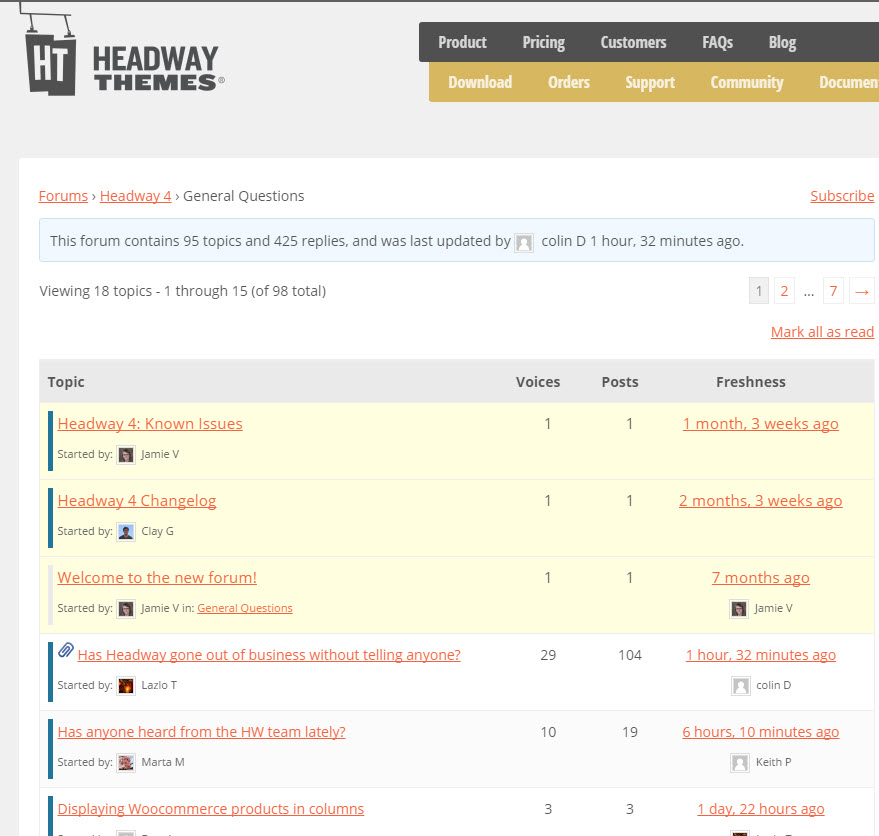 We’ve covered how important communication is and when a company goes silent for an extended period of time, it often leads to speculation from customers and the public. In addition to the lack of communication, customers complained about the sharp decline in technical support.

In the company’s community run public Slack channel, devoted customers discussed possible reasons for the lack of support, one of which was that the support team was laid off. Jamie V., an independent contractor hired by Headway confirmed that she had not been laid off.

All you need to know at this point is I no longer work for Headway as of the end of June. I currently know the same as the rest of you about whether Headway is dead or not. I’m in the same boat as to no communication.

When questioned about the status of the support forums, Gary B. who helped with support as an independent contractor from 2011-2016, acknowledged he no longer worked for the company.

I used to help Headway with support, I don’t currently work for them.

What Headway are telling you is also what they’ve told me – that their aim is to update the theme and provide support ‘soon’.

Existing customers are supporting each other as Headway no longer has a paid team of people to provide support.

Over the last few years, Headway has had to compete against an increasing number of WordPress page and theme builders. Multiple anonymous sources close to the company confirmed that sales of Headway have declined and that staff and third-party developers are not being paid.

Sources declined to go on the record fearing they won’t be able to recuperate the money owed. We’ve tried to reach Clay Griffiths multiple times for comment but he has yet to respond.

While researching for this article, I talked to a number of people who use Headway and depend on it for part or all of their income. One thing almost all of them have in common is a feeling of understanding and compassion for Clay Griffiths.

An anonymous source I spoke to, who is negatively impacted financially, said, “I still count Clay as a friend and I would like to help him get back on track if possible.” What customers want most of all is an explanation to the lack of communication. A vision for the product and company. And what steps are being taken to ensure this amount of radio silence doesn’t happen again.

“For my part I’m one of those who is very keen to see Headway succeed, but I have lost a lot of patience with the lack of communication,” Ray Dale, a Headway customer since 2012, told the Tavern.

“Buggy software is acceptable on complex frameworks such as Headway but a lack of ongoing communication isn’t. Especially when you have a good core community like this one.”

The only two people who know what the future is for Headway are Clay and Grant Griffiths. The deep issues inside Headway are yet another example of how a little communication can go a long way to keeping customers on your side during the rough patches of running a business.