Former Headway Themes Employee Goes Public: Staff Has Not Been Paid and Customers Are Not Receiving Support

As of last week, Headway Themes customers are still not receiving support for the products they purchased and co-founders Grant and Clay Griffiths have yet to communicate via email or the company’s blog. Support is frozen and customers and employees have been jilted, while Headway Themes continues to keep the product available for purchase. The founders have remained silent on why Headway support has dropped off.

Gary Bairead, former “Support Guru” at the company from March 2011 until June 2016, has published a post to inform the Headway Themes community about the situation that has developed over the last few months.

“Clay and Grant allowed the team to work for multiple months at a time when they knew they wouldn’t be able to pay us,” Bairead said. “At no point did they inform us about this while we were working for them. When we tried to contact them about payment, they wouldn’t reply.”

Bairead also said that third-party developers who sold add-ons in the Headway marketplace have not been paid for their products for several months and have received no explanation from the Griffiths.

“After a lot of persistent pressure, the Griffiths eventually stated that they were unable to pay us due to declining sales, and they didn’t know when they would be able to pay us what we were owed,” Bairead said.

His statements confirmed the financial troubles Jeff Chandler wrote about in his initial investigation wherein multiple sources close to the company informed us that sales have declined and Headway staff has not been paid for months. These sources declined to go on record, fearing they would not receive payment for the hours they worked and products they sold through the marketplace.

“Ultimately, it was my decision to stop answering tickets, but I had no real alternative,” Bairead said. “Headway owed me several thousand dollars, and stopped replying to my messages. I couldn’t take the risk of heading into a third month without being paid. I need to eat and pay bills like everyone else.”

Bairead said that the company’s financial issues had been ongoing for more than a year but the lack of payment for the past few months brought it to a head:

It should be noted that while issues surrounding payments culminated with a cessation of support at the end of June, they had been ongoing and unresolved for the past year. The Griffiths have owed us all varying amounts for a majority of the past 12 months – most notably at Christmas, which was a real kick in the teeth. This has created significant financial and personal problems for us.

Bairead has screenshots and videos of internal communications and support systems to back up his claims but is declining to publish them unless Headway makes statements for which he has evidence to the contrary. He also said he is not the only employee who has experienced this treatment from the company.

As part of Headway’s support team, Bairead witnessed what happened behind the scenes in the support forums used by paying customers. He highlighted a few of Grant Griffiths’ responses that he believes misrepresented the support situation to the community.

On August 22nd, Grant stated in Slack that there were only 9 open tickets. While this might be true, it’s not the whole truth.

The reason why there were only 9 open tickets is because they closed a few hundred they didn’t reply to. 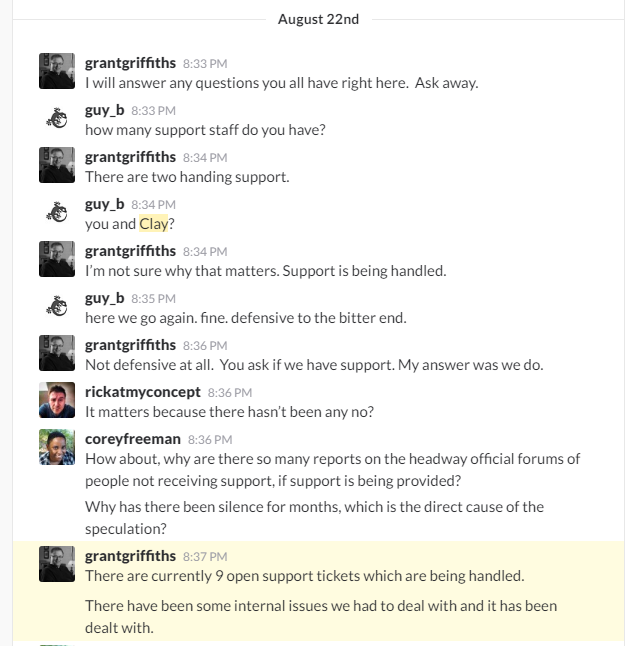 Bairead said that Clay Griffiths has replied to approximately four tickets since July 1st, the day before he launched Pressmatic, his new venture that is separate from Headway Themes. Support queries for Pressmatic have been answered on Twitter, indicating that customers of Griffiths’ new product have open lines of communication. Those seeking support for Headway Themes are not receiving replies.

@GrantGriffiths Where do we send support tickets for @headwaythemes? I've sent a ticket many times over two months w/ no reply

I wonder if @headwaythemes is ever going to reply to the 4 emails I sent them. Not impressed. At all.

Pressmatic and Headway Themes are separate entities, but are both owned by Clay Griffiths. This disparity in support and communication between his two products has caused some Headway customers to seek support and answers via Pressmatic’s channels.

“They sell an unsupported theme to unwitting customers, hope that they don’t ask for refunds, lie to the community about support and updates, then pay us with the proceeds if any trickles in,” Bairead said. He attributes the current situation to a lack of communication.

“The root of Headway’s recent problems has been a chronic lack of honest communication from its owners, Clay and Grant Griffiths,” Bairead said. “If communication is the oxygen of a distributed company, then it’s Headway’s lack of communication that has been slowly suffocating the business and its community.”

I attempted to contact both Grant and Clay Griffiths via multiple channels. Clay has yet to respond, but Grant said, “I have no comment at this time.” If we receive comments from Clay, we will update in a followup piece.

The company’s blog has not been updated since May, and customers have not received any communication about why support has declined.

57 responses to “Former Headway Themes Employee Goes Public: Staff Has Not Been Paid and Customers Are Not Receiving Support”