Gutenberg 3.4 was released yesterday with fixes intended to prepare the plugin for converting existing content to blocks. A wave of new users will soon be testing the new plugin as the result of the “Try Gutenberg” prompt in WordPress 4.9.8. The release date has been pushed back to Thursday, August 2nd.

In early July, the Gutenberg team froze new features on the plugin and shifted to focus on bugs, enhancements, compatibility, and API stability. An overview of the major functionality shipping in Gutenberg is available as a list on GitHub. Gutenberg 3.4 continues refinements on these features.

In preparation for users switching back and forth between the new and old editors, this release adds a warning in the classic editor when users attempt to edit posts that contain blocks. 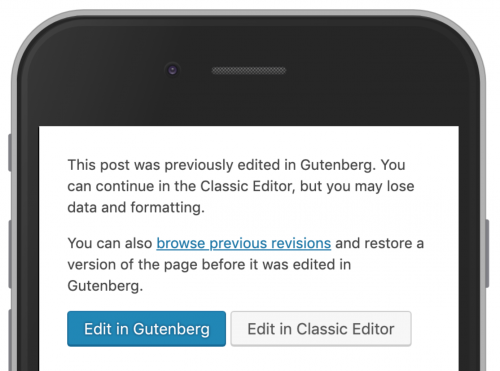 Shared blocks have been renamed to “Reusable blocks” to better convey their function.

Theme developers can now configure font sizes that show in the editor.

This release also adds other little enhancements, including an edit button for embed blocks, the ability to create a video block by dropping a video on an insertion point, RTL CSS, and accessibility improvements.

Check out the release post for a full list of all the enhancements and bugs fixes in Gutenberg 3.4.