10up published a preview of its Distributor plugin today, a new solution for syndicating content across WordPress multisite networks and the web. The plugin, which the company plans to release for free, is currently in final closed beta. It enables content managers to either “push” or “pull” content to/from sites where they have permission to publish.

The plugin differs from many existing content syndication solutions, which traditionally make use of RSS or XML/RPC, in that it is built using the REST API.

“The main technical advantage of the REST API is that it’s a ‘standard’ inside core for sharing information across sites,” 10up President Jake Goldman said. “Outside of multisite, we never even considered another approach. It is worth saying that you do need Distributor installed on both ‘ends’ for all of its features to work across the REST API – we need to extend the REST API a bit to get everything to pull across (plus the handling of ‘linked’ copies).” 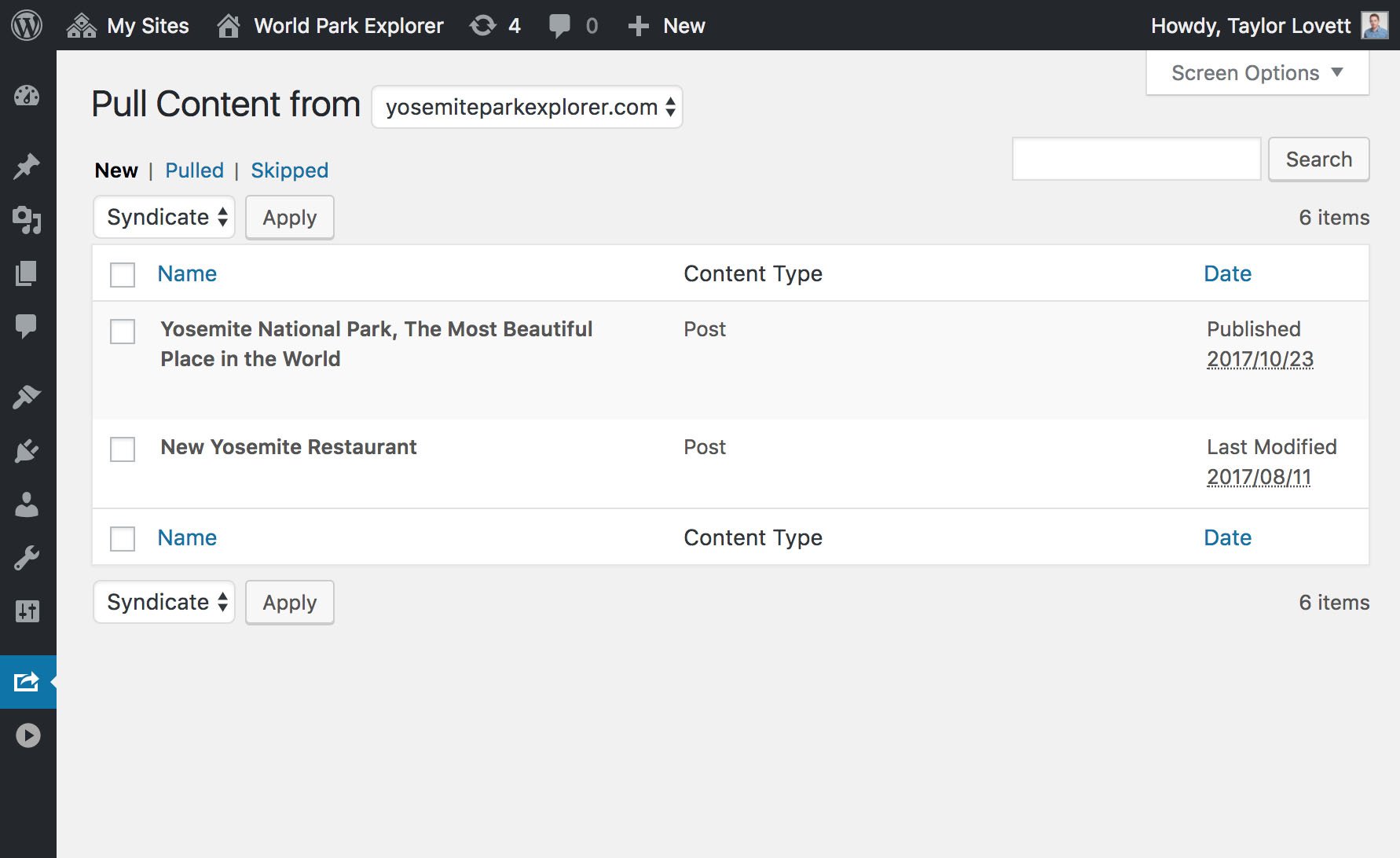 Goldman said that although “syndication” means many different things to different people, the “classic” use case of simply pulling from a source, such as ingesting content from a newswire, is not exactly the use case for Distributor. He said the team behind the plugin is perhaps more excited about the “push” implementation. In building their own solution, 10up also incorporated its trademark lean/streamlined UI, as many existing solutions are more complicated to use.

“We’re definitely aware that there are other takes at a good content sharing workflow,” Goldman said. “We even helped Automattic refactor their solution a few years ago, which they use on VIP. We took a bit of inspiration from that project, including the modular ‘connection’ types. In earnest, when trying to help our clients find solutions that were intuitive, extensible, and engineered to an enterprise grade, we just couldn’t endorse any of the options we found. It’s more a UX problem – clunky workflows, overwhelming interfaces, feature overload (I prefer a certain simplicity) – than anything, though we also have concerns about how modular / customizable some of the other solutions are.”

10up Plans to Release Distributor on WordPress.org Following the Closed Beta

10up currently has several clients using Distributor, including large publishers with several properties/magazines/newspapers, as well as large technology businesses using it for their news and media features across a network of sites. The plugin is in final closed beta but 10up is granting early access to those with interesting use cases.

“We’re casting a pretty broad net in terms of ‘appropriate’ use cases for the beta; in fact, we’re hoping that broader beta testing will open our eyes to great use cases within the scope of its purpose that we hadn’t considered,” Goldman said. “We’ve already heard from some very large publishers, some smaller digital publishers, universities, public school systems, some enterprises with multiple properties, agencies interested in staging content, and just engineers who own multiple sites that share content – we’re excited about all of these use cases!”

Goldman said his team is most curious to see Distributor applied to use cases that aren’t simply “news and publishing,” including CRMs and product businesses with multiples sites that share content. 10up has not yet tested specific plugins for full compatibility with Distributor, but Goldman said pre-version 1.0, it should work with any plugin that adds custom post types and fields/taxonomies “the WordPress way.”

“In fact, Distributor checks to see which sites support the same post type and terms before it offers a list of sites you can ‘distribute’ content to (so you can’t ‘distribute’ a WooCommerce product to a site not running WooCommerce),” he said. Selling the same products across multiple stores, with automatically updating inventory and price changes, is just one of the many interesting use cases for Distributor.

Goldman said the team anticipates taking the plugin out of beta and putting it on WordPress.org by mid to late Q1 of 2018, in approximately 2-3 months, depending on feedback from testers. 10up does not currently have a plan to monetize the plugin.

“I never want to rule out that there are ‘eventually’ opportunities for commercialization, but I can honestly say that isn’t anywhere on our roadmap or consideration set at the moment,” Goldman said.

Those who want to get in on the Distributor beta before it is publicly available can sign up on the plugin’s website with a quick explanation of your use case. 10up will send a copy of the plugin for testing.