WordPress 5.1 has been downloaded more than 3.6 million times since its release last week and work on 5.2 is now underway. The upcoming release will be led by Matt Mullenweg with Josepha Haden acting as Release Coordinator. Gary Pendergast posted a proposed scope and schedule that would have 5.2 arriving April 23, 2019.

One of the proposed features is block management, the ability for users to hide or turn off blocks that they are not using. An avalanche of blocks is pouring into the WordPress ecosystem, especially with the push to convert core widgets to blocks. Users’ expectations will soon become firmly rooted in the concept of the block interface as widgets slowly become a relic of the past. It’s also quite common for users to install block collections that introduce a dozen or more new blocks when they really only have use for a handful of blocks. 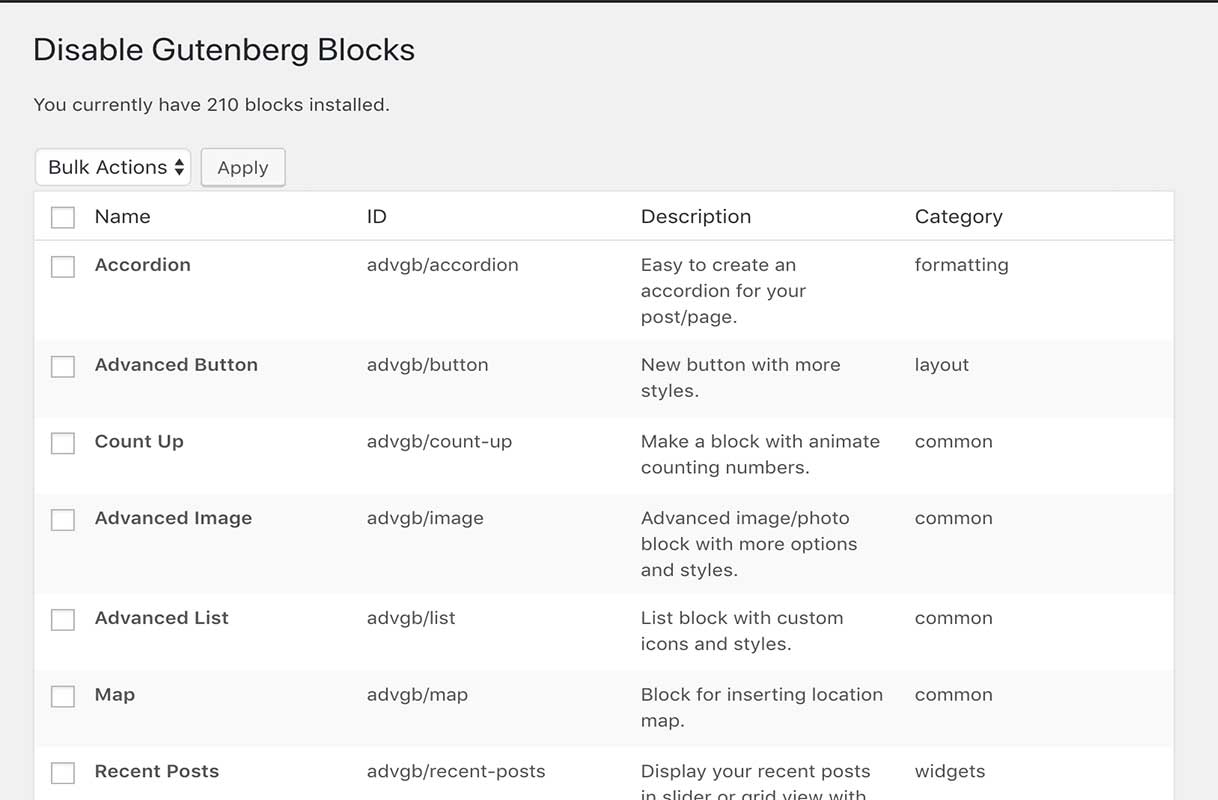 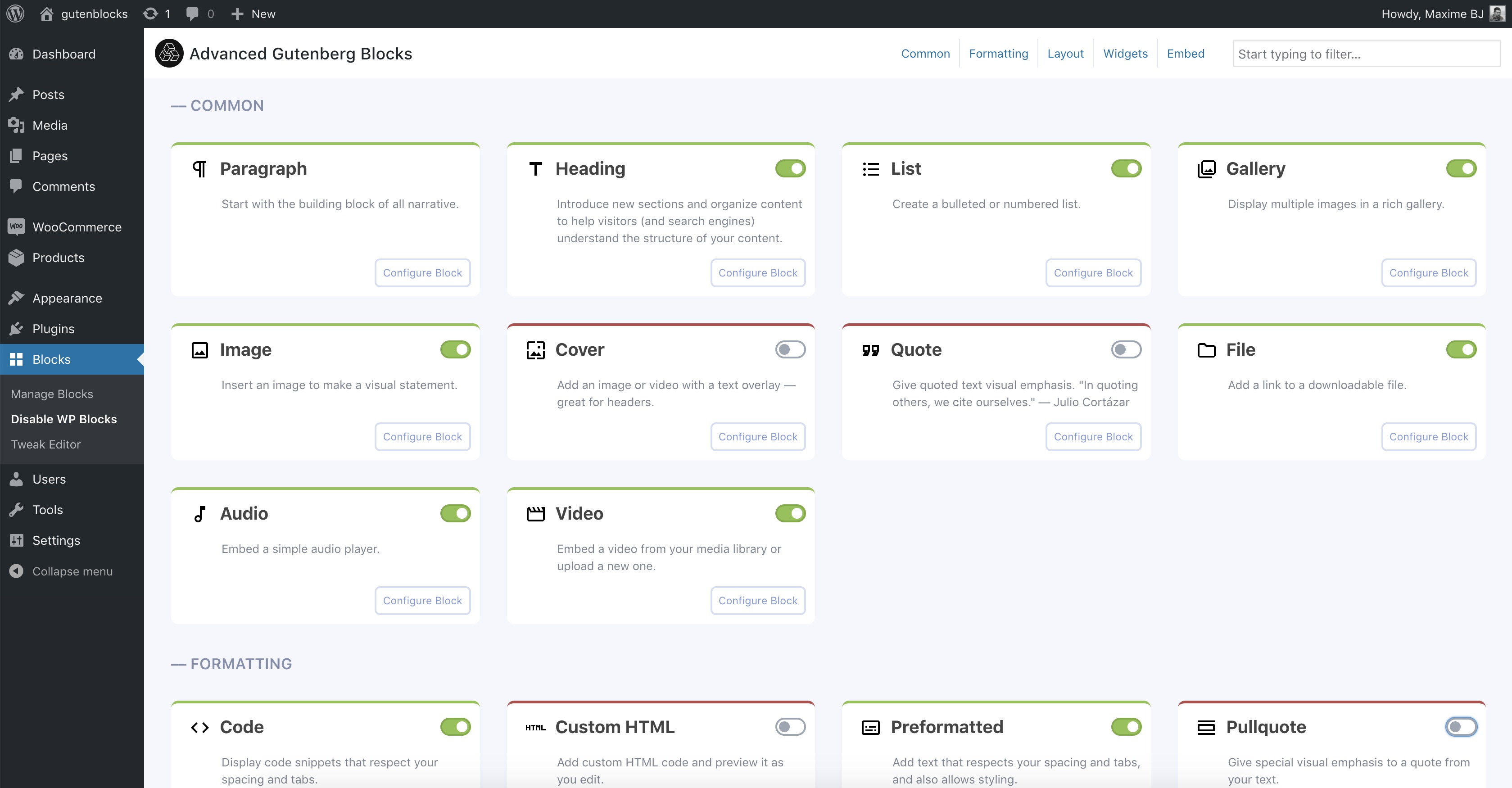 CoBlocks recently introduced a block management feature that is one of the more elegant implementations currently available. It adds the block management interface inline with the editor in a modal window, instead of relegating it to its own admin page. It also offers the ability to turn entire categories on/off.

After CoBlocks announced its block management feature, Nick Hamze contended that this should be replicated for WordPress core. His comments received a bit of pushback from Gutenberg technical lead Riad Benguella who sees it as a feature for more advanced users.

Yeah, nice plugin. It feels like something for advanced WordPress users / developers / agencies… and not something that should be baked in initially but happy to discuss.

“The ability to disable blocks seems pretty basic,” Hamze responded. “Rich didn’t make this feature for fun. Regular users (not advanced ones or developers) asked for this. He made it to solve a problem that real users are having. You are telling me that more regular users will use the Amazon Kindle Embed Block (that is being baking into 5.1) than would like the ability to turn off blocks they don’t want to use.”

Last week when I spoke to Benguella about the possibility of block management capabilities being included in core sometime in the future, he said it wasn’t an immediate priority for the project.

“Block management is not an immediate focus in the Gutenberg roadmap and is considered plugin territory, but we keep close attention to the work done in the community and adapt in case user research and suggestions that bring value for the majority of users,” Benguella said. “My personal opinion for the moment is that, these are advanced features not required by every user of WordPress.

“That said, it’s important to enable plugin developers to implement more block management features, and one important piece of the puzzle here is the work we’re doing right now to improve the block registration and discovery both using REST APIs, PHP helpers and JavaScript APIs.”

The project’s priorities seem to have changed since that time, as block management is now a strong consideration for WordPress 5.2. Thousands of users have already installed a plugin that includes these kinds of capabilities, a good indication that there is a demand for this. As everything in the plugin ecosystem gradually moves towards blocks, it will be easy for users to get inundated by the many blocks available in the editor. Plugins are currently answering users’ needs with many different UI’s for turning blocks on/off. It’s clear that WordPress core needs to lead the way by providing a standard UI for block management.

In recent #core-editor chats Benguella said he has some concerns regarding the short time frame for the newly proposed block management feature, but is starting initial explorations of what the first iteration may look like in WordPress 5.2.

“So in addition to the currently shipped enhancements and the work done on the widget blocks, there has been a bunch of requests and feedback suggesting the need for a block management solution and block directory work,” Benguella said. “This is actually proposed for 5.2 and something we need to start thinking about and exploring the existing possibilities.”

Pendergast referenced CoBlocks’ implementation in his 5.2 scope and schedule post as an example of how plugin developers have approached block management.

“We weren’t the first by far, but I’d argue it’s clearly the best experience,” CoBlocks author Rich Tabor said. “I built it because folks have been asking for just that, and I wanted to deliver a much better experience than asking them to go to a WP admin page elsewhere. I’d love to see something like the Block Manager in core and am available to help out in any way I can.”

Other proposed features for WordPress 5.2 include the Site Health Check plugin, PHP error protection, and package signing for updates. The first beta is expected March 14, 2019, and RC 1 is slated for April 10, 2019.