Organizers of the very first WordCamp Belgrade are happy to report that the event was a smashing success. Serbia’s rapidly growing WordPress community started just two years ago with local meetups that became larger than some smaller WordCamps.

“Our road from the first meetup back in April 2013 to the first WordCamp was brilliant,” organizer Milan Ivanović said. “Every WPSerbia meetup had no less than 100 people attending, with at least three speakers each.” Serbia was ready to host its first WordCamp.

“We were completely sold out about 10 days before the actual event, and it was such a shame that we had to turn down around 50 people who were asking for extra tickets,” Ivanović said. “We were limited by the venue and we couldn’t take more than 180.”

Attendees represented 13 different countries with the highest numbers from Serbia (73%), Macedonia, Bosnia and Herzegovina, and Croatia. Those who came from other countries were treated to Serbia’s famous hospitality with tours and local cuisine.

“We dedicated some extra time for people who visited Belgrade for the first time to experience Belgrade and all of its beauties,” Ivanović said.

“That is why we organized an unofficial after-after party that included a stroll through Belgrade’s main pedestrian street Knez Mihailova, a visit to Belgrade Fortress Kalemegdan, and dinner with true Serbian food and music in the most famous boem street Skadarlija.”

“The food was so good that I was afraid that this WordCamp wouldn’t be remembered by its talks and speakers but by the catering that all of us enjoyed,” he said.

Attendees received “Wapuujlo” magnets and stickers to commemorate the event.

Videos from the WordCamp are already available on WordPress Serbia’s YouTube account and will soon be uploaded to WordPress.tv as well.

“As soon as WordCamp Belgrade finished, the first thing I did was start plans for #wcbg2016,” Ivanović said. 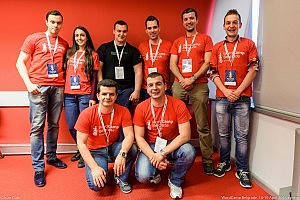 “The biggest outcome from this event was people asking how they can help organize the next WordCamp Belgrade, offering lots of different kinds of help – from finding new sponsors to offering their organization skills.”

Ivanović and the organizing team plan to at least double the size of the event next year. They are aiming for 400 attendees and two tracks of speakers.

“If we manage to organize an event that size, I think that would be an awesome test and a great intro for application to organize WordCamp Europe 2017,” he said.

Check out more photos from the event on the WordCamp Belgrade website.