Shortly after New Year’s, Nick Haskins caught the eye of WordPress publishers with his open source story telling plugin. The prospect of building feature-rich, interactive stories within WordPress, without having to touch any code, was so promising that the project’s Crowdhoster campaign was fully-funded by the end of January.

The buzz around the Aesop plugin proved that the art of storytelling is not dead. Publishers are eager to have more tools at their disposal to create stories that capture readers’ attention. While Aesop brings a user-friendly implementation of storytelling features into the WordPress admin, the task of theming the plugin remained a real obstacle.

Haskins had originally hoped to focus on the hosted version of Aesop after getting funded, but he temporarily scrapped that plan in favor of getting the plugin ready for showtime. Now that Aesop is available on WordPress.org, Haskin’s team is moving full steam ahead to develop themes that will bring the plugin to life. 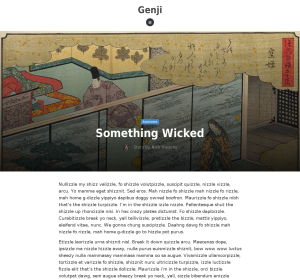 The first official theme for Aesop is now in the wild. Inspired by NY Times Snowfall, the Genji theme was designed to load quickly and keep the spotlight on the story.

Haskin’s team aimed for simplicity with their first product. Genji loads only two files. It includes a handful of options for uploading a logo and changing the background, text and link colors. All of the magic, however, is powered by the media that users add via the story engine. 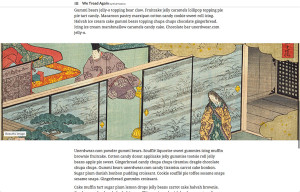 With the first product released, the team is focusing on Jorgen, the next theme on deck for the story engine. Jorgen will incorporate the “cover” feature found on the Aesop Story Engine demo site. The development team has received many requests for the theme behind the story engine demo site and they are currently working on making that available to the public.

All future Aesop themes will be sold on ThemeForest, as Haskins is now partnering with Envato to make it easy for consumers to find themes for the plugin.