It started off as a blog post. Fresh out of WordCamp Norway, Slobodan Manic shared his experience at the event. Near the end of the post, Slobodan asked fellow developers if they’d like to release a plugin together. The idea being that working together creates more opportunities to learn. The plugin would have a few caveats though.

It has to be free, released to wordpress.org repository and lean. Other than that, anything goes. So, let’s do it together. Leave a comment or send me a tweet if you’re interested. 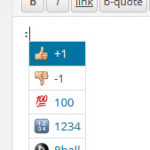 The groups first plugin is Hello-Emoji. The plugin provides an easy way to access an auto-complete list of emoji icons. Emoji are graphical representations of things like smiles. Emoticons are text-based versions of emotions.

Functionality aside, the more important aspect of this plugin is that it was created by five people from four different continents in a two week time period. Prior to Slobodan’s post, these people didn’t know each other. The first part of the plugin description illustrates the project perfectly.

Hello Emoji is more than a plugin, it represents the hopes of a generation. It is going to be proof of the idea that WordPress represents: that free software can bring people together to accomplish something that they couldn’t do themselves, while adding something of value to the commons for all to share.

Hello Emoji is almost ready to be submitted to the WordPress plugin repository. Until then, discussion has started on the groups second plugin, Trello. Outside of Hello Emoji, WPCollab also has a skeleton plugin available that is used as a framework.

Collaboration Outside Of WordPress.org

Slobodan tells me that everyone part of the project will be providing support for any plugins released. WPCollab is open to anyone who wants to contribute and learn with others. So far, the group seems to have good chemistry. The idea of creating plugins with a monetization strategy has been brought up but they have decided to continue working on free plugins for now.

It’s great to see projects like WPCollab take off. It’s a good starting point for new plugin developers and who knows, perhaps in the future the site will turn into a collaborative plugin factory.