Over the weekend, WordPress lead developer Andrew Nacin announced a major update to WordPress version stats for PHP, MySQL, and WordPress. While the stats page looks much the same as before, more sophisticated methods of collecting and processing the data have been put in place, thanks to the efforts of WordPress.org contributor Dion Hulse. The results are a dramatic shift in the data reported. 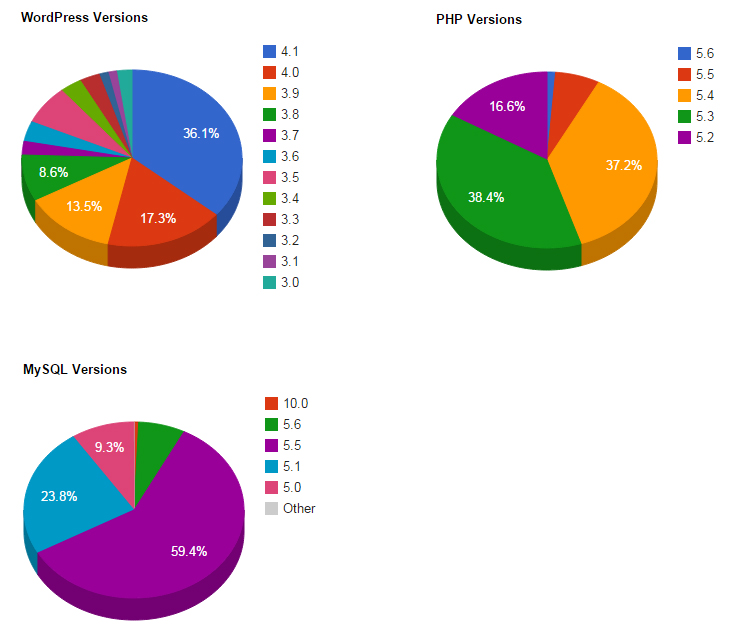 More Than 1/3 of Sites Running on WordPress 4.1

One of the most notable differences is the percentage of sites that are running the latest version of WordPress. Things are not quite as grim as previous stats indicated. Prior to the update, WordPress was reporting fewer than 10% of sites running on 4.1. After eliminating data for sites that are no longer online, the new data shows roughly 36% of sites running on the latest version.

Andrew Nacin explained how the new stats are collected and interpreted into the updated pie chart:

Thousands of new WordPress sites come online every day. Some others, though, stop pinging over time. The new data only reflects sites that have pinged api.wordpress.org within the last few months. There were also plenty of other inconsistencies in the data that we’ve been able to resolve, which has resulted in numbers we feel are more consistent and accurate.

Other major shifts in the data demonstrate that there are very few sites still lingering on WordPress 3.0, which was released in June 2010. Sites running on 3.0 were previously reported as 16.06% but are now ringing in at just 2.27%.

The same goes for PHP 5.2 usage, which was previously reported at an alarming 31.76%. More accurate data puts this figure at 16.60%. This is likely due to eliminating sites that haven’t pinged api.wordpress.org within the last few months.

While the PHP version usage outlook is no longer as bleak as previous data indicated, Nacin said it isn’t enough to change the minimum required for WordPress core:

One-sixth of all sites running PHP 5.2 is still many millions of sites. If we move the PHP minimum version too early, we risk stranding millions of installs on older versions of WordPress.

So, I wish to note that this does not change our calculations for keeping PHP 5.2 as the minimum for WordPress core — we had these numbers available to us when preparing our 2015 plans.

The new stats are a welcome update to many involved in supporting and updating WordPress sites, but several commenters requested a more detailed cross of PHP version as compared to the WordPress version that sites are using.

@miss_jwo I've been whining about seeing a cross for literally years… :)

WordPress developer Josh Pollock commented on the announcement post with the same question: “Is there anyway we can see PHP/MySQL versions broken down by what WordPress version they are running on? It would be interesting to see what percentage of users running an EOLed version of PHP are choosing to stay on old WordPress versions of their own accord/lack of action.”

I checked with Andrew Nacin, who confirmed that this data is available and will be made public at some point in the future. “We’re still working on ensuring the numbers are stable,” he said. “They’re pretty predictable: older WP versions have more people on older PHP and MySQL versions. Newer WP versions have less.” There’s currently no set timeline for delivering the additional stats, but WordPress.org contributors have more data in the works.

The WordPress project continues to work with hosting companies to urge them to update their PHP version offering to 5.4+. This is a slow but necessary process before WordPress can raise the minimum required PHP version, which Nacin said is ultimately part of the plan:

Our goals remain the same: priority 1 is to update old WordPress installs, priority 2 is to update old PHP and MySQL. Only once the numbers drastically move as a result of our efforts would any minimum requirement change. We cannot risk abandoning so many users on older WordPress and PHP versions.

Ensuring the accuracy of WordPress usage stats is a major milestone. At the moment, the number of users on PHP 5.2 is far too high to consider a minimum requirement change any time soon. However, Nacin said that hosts have so far been very responsive to WordPress’ urges to update PHP versions. “Right now we’re still primarily in a research phase, but hosts have been very receptive and proactive in this area.”

4 responses to “WordPress Version Stats Updated: More Than 1/3 of Sites are Running WordPress 4.1”