In a SMB trust index survey conducted by Alignable in the fourth quarter of 2015, WordPress ranked as the most trusted of 25 nationally recognized brands used by small business owners. The results were ranked using the (Net Promoter System), a trademarked customer loyalty metric that measures promoters against detractors to produce a net trustworthiness score.

The survey, which was originally reported by the San Francisco Business Times, was roundly disregarded in the WordPress community due to the misuse of the word ‘company’ in the Times’ writeup:

For small business owners, WordPress is a well-trusted company, Yelp is a brand in trouble, and Facebook is on a downward path. 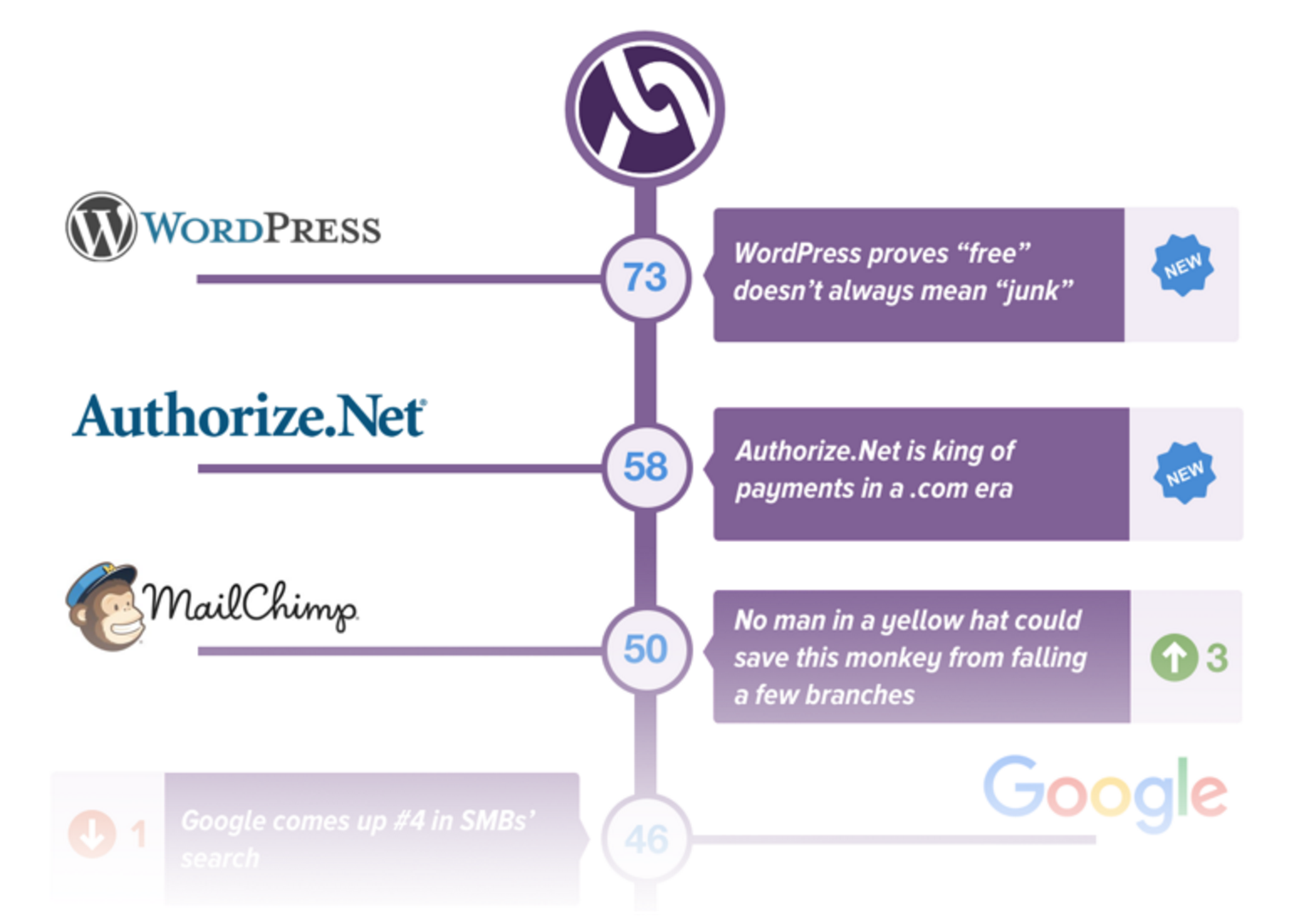 Despite the odd presentation, the results are worth examining, as Alignable surveyed more than 6,000 small business owners across 7,000 communities in North America. WordPress received an NPS of 73, significantly higher than other brands known for website creation: Shopify (29), Godaddy (26), Squarespace (11), Wix (-7), Weebly (-13), and Web.com (-61).

The footnote on the report explains the relative position changes which are shown on the rankings graphic for brands that were included in the previous quarter’s survey:

Data represents running, cumulative report of SMB sentiment of vendors and providers from more than 6,000 ratings. Relative position changes from this quarter to the prior quarter were generated from the 25% net new ratings added to the database in the quarter. Alignable members rated these brands on a sliding scale from 0-10. NPS values calculated by subtracting percentage of detractors (brands rated 0-6) from percentage of promoters (brands rated 9-10).

Godaddy fell one point in positioning and Wix and Weebly fell 4 and 8 points respectively. WordPress is new to Alignable’s SMB index and should have relative position notes included in next quarter’s survey.

Although the footnote specifies that the index rates brands, the 25 that are included are clearly companies and products. Any conclusions drawn from rating the general WordPress brand would be somewhat nebulous, given that it’s not clear if business owners are rating their experiences with the WordPress.com service or the self-hosted software. With the introduction of Calypso, the gap between the two publishing experiences continues to grow.

Nevertheless, most of the brands included are also representative of several different products. The scores are more of a general indication of the trustworthiness of the brand name, although creators of the Net Promoter System claim that a high NPS can point toward long-term profitable growth. If you’re in the business of building websites or applications for clients, it’s good to know that the trustworthiness of the WordPress brand is ranking high among industry competitors.