The WordPress Editor Experience survey results have been published with data from 2,563 participants, a significantly larger sampling than the 50 who responded to the recent customizer survey. Both the editor and the customizer are included in Matt Mullenweg’s three main focus areas for core development in 2017. The purpose of the surveys is to find out how WordPress users are using or not using the current features.

More than half of the survey respondents (66%) identified themselves as developers (in addition to other roles). Since this category of users dominated the survey results, Mark Uraine decided to break it down further to display other categories developers selected.

Based on these results, it isn’t surprising that more than 85% of respondents use the markup text editor and 35% of those use it exclusively. Support for syntax highlighting is also a popular request.

The distraction-free writing mode received quite a bit of feedback on the survey. More than 75% of respondents said they do not use it. 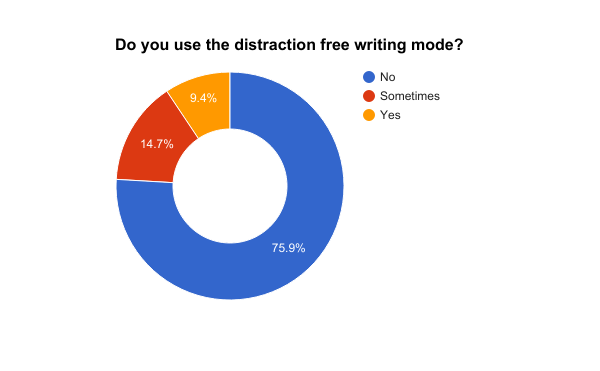 The current implementation of the distraction-free writing mode was introduced in WordPress 4.1 at the end of 2014. The idea was to minimize distractions without having to go through a clunky transition to access the admin menu or meta boxes. Moving the cursor to the right or left of the editor brings them back into view, but many people find the admin interface sliding in and out of view to be distracting. Several who commented suggested that the feature could use some major improvements.

The survey also revealed that the majority of respondents (72%) install plugins that add features to the editor. These most commonly include shortcodes, Advanced TinyMCE, Tables, and Visual Composer. The results indicate that users often extend the editor to get more basic advanced layout capabilities for presenting their content.

The Editor Experience survey was a good first start, but it doesn’t accurately represent WordPress’ global user base. The results are heavily skewed towards developers’ needs and experiences. Developers are users, too, but there has to be a way to get these surveys into the hands of a more diverse sampling of users. Reopening the survey and circulating it beyond the WordPress developer community might help to paint a more accurate picture of users’ experiences with the editor.

A more diverse sampling would reveal whether or not the vast majority of users have no use for the current implementation of the distraction-free writing mode, as developer feedback seems to suggest. It could also provide more feedback on the visual editor features that 35% of respondents to this survey never use.