In January 2017, WordPress core design contributors posted a survey titled What are you using the Customizer for? The link was published on the Make WordPress Design blog and wasn’t widely shared, so it only received 50 replies. Responses were anonymous, but most seem to have come from the WordPress developer community.

Despite the small sample number, the design team deemed the initial results important enough to share with the community. Responses on the first question show that 53% never or rarely use the Customizer and 7.8% tend to only use it when setting up a site for the first time. Those who do use it (39.3%) range in frequency from monthly, weekly, and daily. 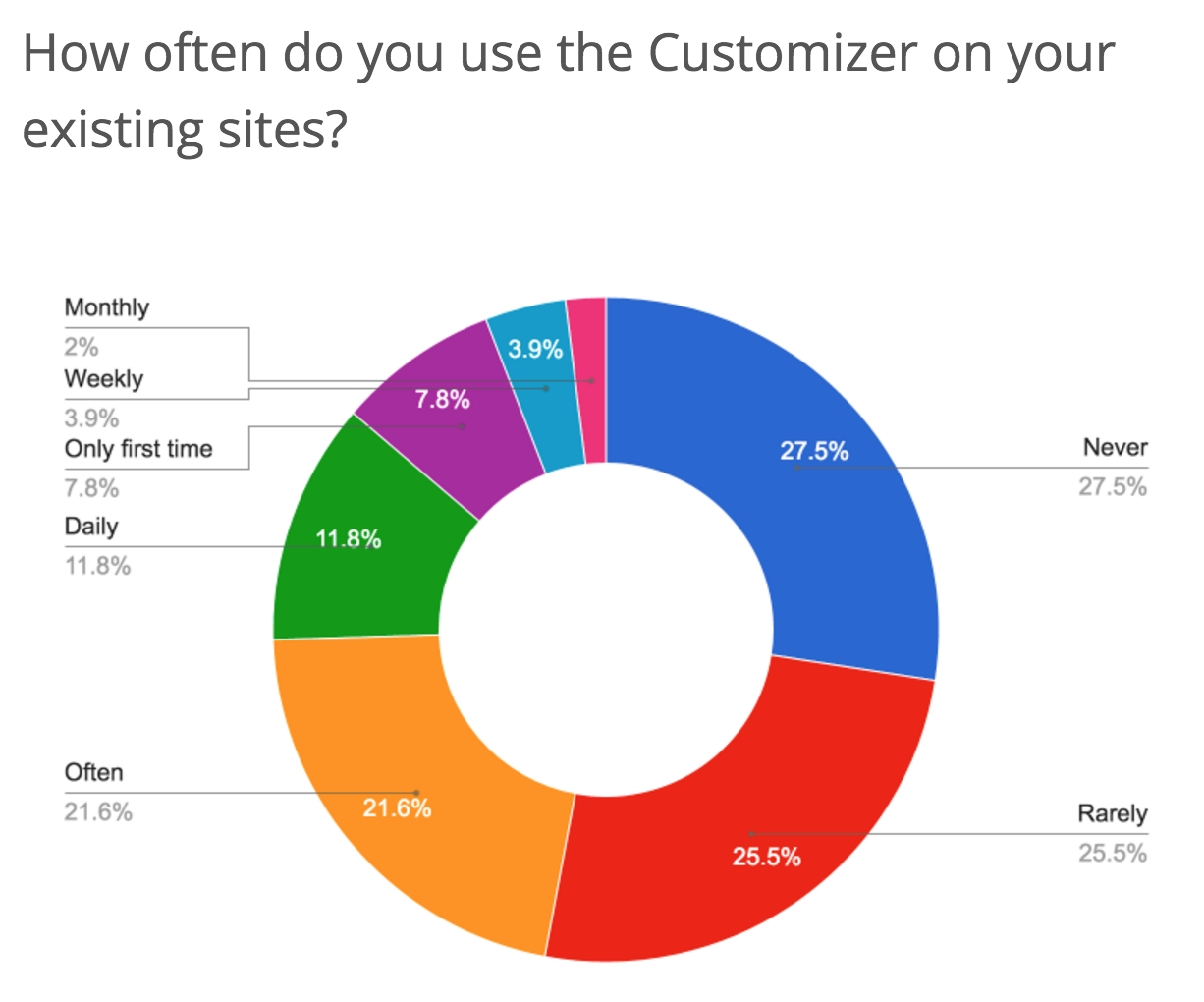 More than half of respondents (53.6%) do not add plugins to extend the Customizer. Those who do are adding plugins for theme options (12.5%), colors (5.4%), layout (7.1%), and other (21.4%). The majority of respondents indicated they use themes that add new functionality to the Customizer (53.9%) and those specified include colors, layout, typography, theme options, and design features.

When asked if is there anything in the Customizer they cannot live without, 53.2% of respondents said no. This isn’t surprising given that most of them seem to be developers who are likely familiar with adding custom CSS or making edits to a child theme. Only 6.4% said they could not live without live previews. When asked if there was anything in the Customizer they never use, 31.3% of respondents said “Everything,” 20.8% said “No,” and the others identified specific features. 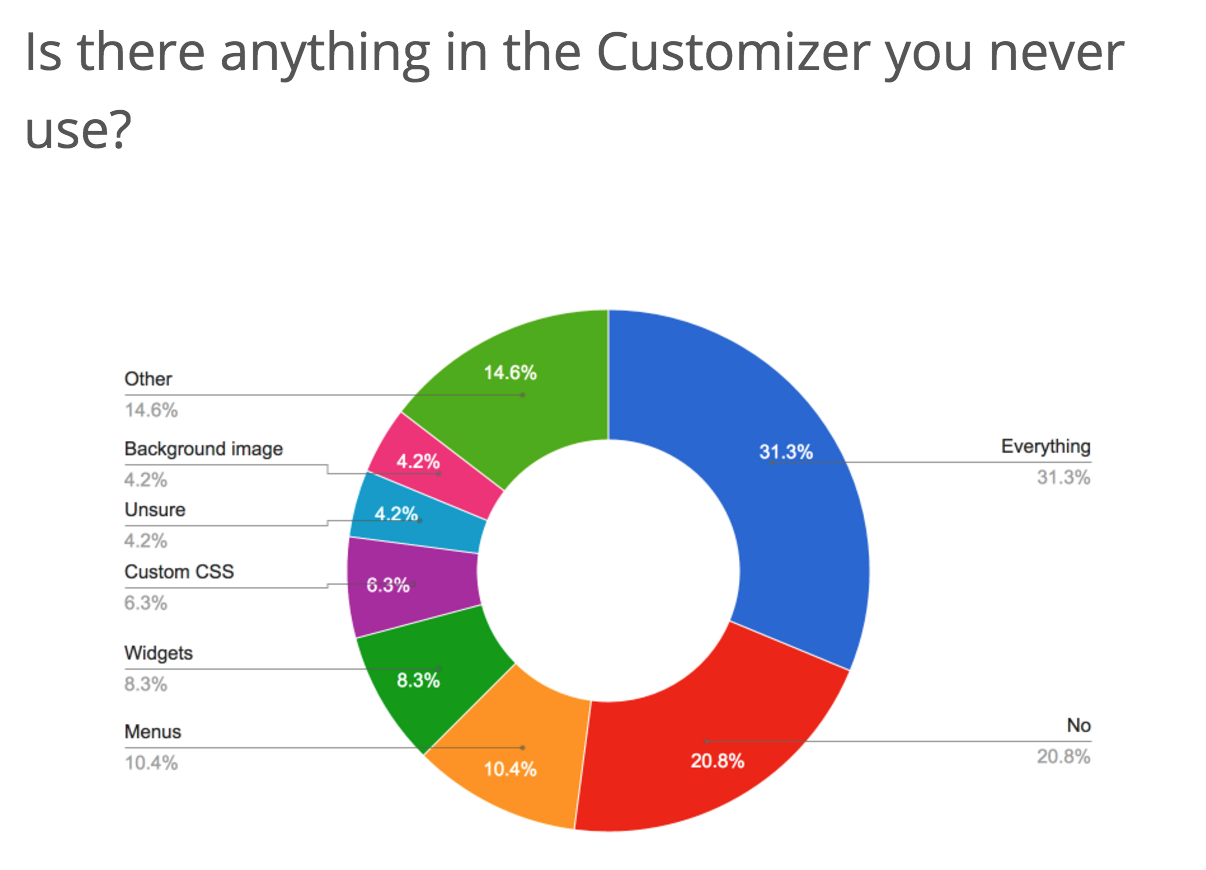 The negative comments on the questions are a general indicator of the lingering dissatisfaction with the Customizer. For those who use the feature regularly, one strong theme in their comments is that the separation between what settings are available in the Customizer versus the backend is confusing:

Setting up theme styling, redesigning, setting up sites, etc. Very useful for quick changes like a new header image to change up the look. Wish you could edit everything there instead of going elsewhere to edit content too.

I don’t like it and wish that I didn’t have to use it. Most often if there is a setting I had to use the customizer for, I will either forget that something was set in the customizer and end up hunting around for it for a long time before remembering that’s where it was. More often than not the “preview” functionality doesn’t work and you have to save the settings anyway. Also there doesn’t seem to be any consistent logic as to what features should be in the customizer, and theme authors just put whatever they feel like putting in there.

What would be great, it is to incorporate more settings in the Customizer in order to avoid the back and forth to set up the site (date format, title, tagline, posts per page, …).

Many users don’t understand the separation between content and presentation and don’t approach the Customizer with this mindset. Therefore, the Customizer’s omissions create a disjointed experience for users who are new to WordPress.

Absolutely! Most of my clients complain about the footer and why is it so difficult to modify something so basic as this sentence: “Proudly powered by WordPress”… It is really nonsense having so many options in customizer and still having to create a child theme only to be able to edit the standard footer sentence… That doesn’t make any sense, really!”

These kinds of frustrations are likely to continue until the Customizer can unify the content and theme editing experience. Currently, the bulk of content editing happens in the admin, but Customizer contributors are working towards adding frontend editing powered by the Customizer.

It is difficult to know how to place this data, since the survey didn’t ask for any information about the respondents’ WordPress background. However, the large number of negative responses underscore the importance of having the Customizer as one of the three focuses for WordPress core development in 2017.

Customizer component co-maintainer Weston Ruter said he’s “not really surprised” by the negative feedback in the survey, as there are lots of passionate opinions about the Customizer.

“Everyone should agree that the Customizer isn’t a finished product, but the answer to that is to make it a focus and make it the live preview interface that WP needs, not rip it out,” Ruter said. “And that focus is what 2017 includes.”

The survey is still open, if you want to contribute more data for the design team to consider.