Contributors on the Menu Customizer feature plugin are proposing its inclusion in WordPress 4.3. Nick Halsey posted the Customizer Team’s proposal last night, beginning with a summary of the purpose of moving menu management into the customizer:

In the process, we hope to offer an updated design with improved user flow, a mobile-first interface, improved accessibility, rebuild the administration UI from the ground up to be JavaScript-driven, solve long-standing problems with the current implementation, and clarify the purposes and capabilities of the menus feature. Additionally, Menu Customizer contributes significantly to the long-term goal to move all appearance functionality and, really, everything that could benefit from live previewing, from the admin to the Customizer.

Menu management in the customizer is essentially a full replacement of all the capabilities previously housed in the admin. It allows for editing, reordering, deleting, and adding individual menu items within any menu. The plugin adds a convenient global search that includes all post types, terms, and taxonomies.

The video below was prepared by Halsey’s team to demonstrate the capabilities of the Menu Customizer:

The dizzying speed with which she flips between panels in the demo is not representative of the capabilities of your average WordPress user. Given that the plugin currently requires WordPress 4.3 alpha, it’s not likely that it has not been widely tested by users of varying experience levels.

My initial impression after testing is that managing menus in the customizer makes me feel claustrophobic. The live previews and the mobile friendliness are the big wins here, but they come at the expense of a squished menu management experience. For sites that use WordPress as a CMS, with dozens and sometimes hundreds of pages and subpages, menu management in the customizer could become rather cumbersome. 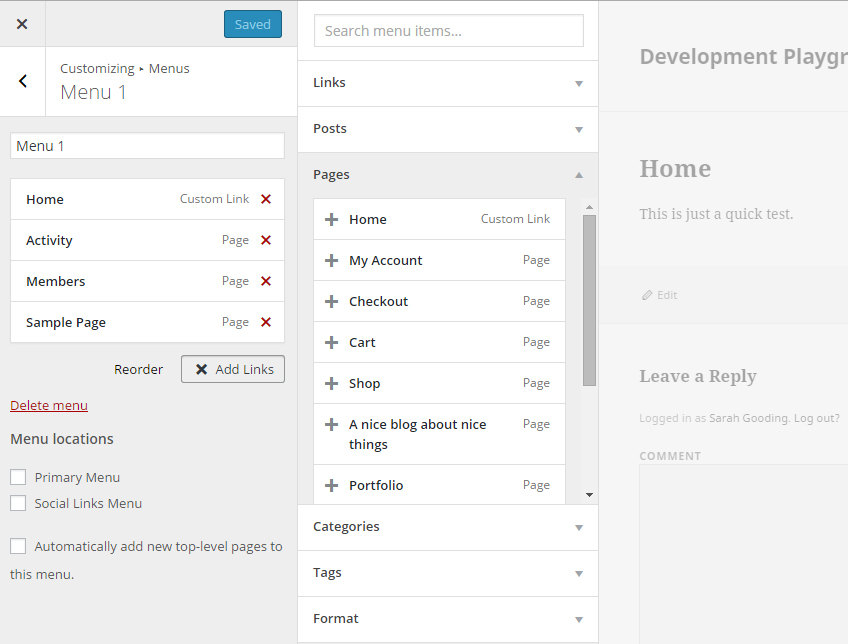 I have no doubt that the Menu Customizer has been architected to perform better as a JavaScript-driven solution for managing menus. Halsey and the team employed no small amount of wizardry in creating the custom panel for implementing screen options and the sections that lazy load menu items.

But if you put a relatively new WordPress user in front of the customizer menu panel, will it be intuitive to use? Will stuffing menus into the customizer cause the usability of the feature to decline?

Reactions to the proposal in the Advanced WordPress Facebook group were less than enthusiastic, as not many favor expanding the customizer’s reach into menu management.

“I really don’t feel the Customizer is the correct place to manage menus or any content for that matter,” member Tom Hemsley commented. “If a theme offers styling options for a menu then fair enough – put those styling options in the customizer. But the customizer is not the place for managing content. Why not force people to create new posts using the Customizer, too?”

Lisa League’s comment accurately summarizes many others’ initial reactions to the demo video: “My first impression of Make was not ‘Cool, look how they did this with the customizer’ but ‘Whoa, there’s too much stuff in this tiny space.’”

“The above plan is fairly aggressive, to eliminate any ambiguity about future plans and intentions and to avoid the potential for mass trac ticket rot,” Halsey said.

WordPress cannot move forward without making changes and taking risks. The question of whether or not to merge the Menu Customizer plugin should inspire some fairly active discussion in the days ahead. If you want to test the plugin for yourself, the easiest way is to install the WordPress Beta Tester plugin to get 4.3-alpha running and then install Menu Customizer from WordPress.org.

Core contributors will discuss the Menu Customizer proposal today during the regularly scheduled development meeting on Slack. According to the WordPress 4.3 project schedule, the feature plugin merge window will close June 17th and the official release is expected in mid-August.

37 responses to “Menu Customizer Officially Proposed for Merge Into WordPress 4.3”