WordPress.com released its new Chrome Add-on for Google Docs today. The free add-on allows users to edit documents collaboratively in Google Docs and then send the document directly to any WordPress.com site as a draft post. The add-on can also connect to Jetpack-enabled sites, offering the same functionality for self-hosted WordPress users. 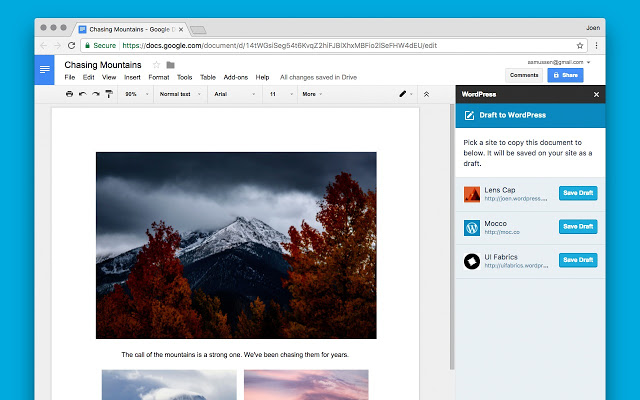 After installing the add-on from the Google Chrome Store, users will be asked to give permission for it to send posts to WordPress.com. Clicking on the Add-ons menu within the document will open a sidebar where you can add sites. When the document is ready to send to one of your sites, you can click on the “Save Draft” button. You’ll be given a preview link to check out how it looks on the site.

Ordinarily, copying and pasting content from Google Docs into WordPress results in a messy draft that lacks the same formatting. The new add-on was created to tackle this problem. It duplicates the document’s images and formatting into WordPress, cutting out a lot of secondary formatting that used to be required.

“Collaboration has been a big area of interest for us, and we want to investigate a lot of different approaches,” Automattic representative Mark Armstrong said. “Google Docs made perfect sense because it’s where a lot of people already do collaborative editing. If we could streamline that process for publishing a Google Doc on WordPress, that would help so many people. We’ve been testing it with publishers and heard a lot of great feedback.”

Armstrong didn’t have any data for how often users paste content from Google docs to WordPress.com, but making content more portable between the two platforms is an often requested feature. The WordPress Plugin Directory has several plugins for embedding Google documents inside content via a shortcode embed or oEmbed, demonstrating that thousands of users are already interested in bringing content over from Google Docs to WordPress.

After testing the add-on with a sample document that includes special formatting and images, I found that it is a great improvement over the clunky copy and paste experience. Sending posts to WordPress.com is fairly seamless and works as advertised.

In testing with multiple Jetpack-enabled sites I received some errors when authenticating, which may be due to a security limitation of my host. We had the same issue with the Tavern and were not able to fully test it for self-hosted WordPress sites, but are continuing to investigate the issue. However, other Jetpack-enabled sites are reportedly working with the add-on as expected, according to Armstrong.