Draft, Schedule, and Preview Changes in the Customizer

Prior to 4.9, users could get a live preview of their sites in the Customizer but any changes they made would need to be saved immediately or discarded. This update makes it possible to draft and schedule changes in the Customizer, and even share a preview link to collaborate on changes before making them live. Users can now stage content, such as new pages, a new set of widgets, a different combination of menu items, and schedule it all to publish at a future date. 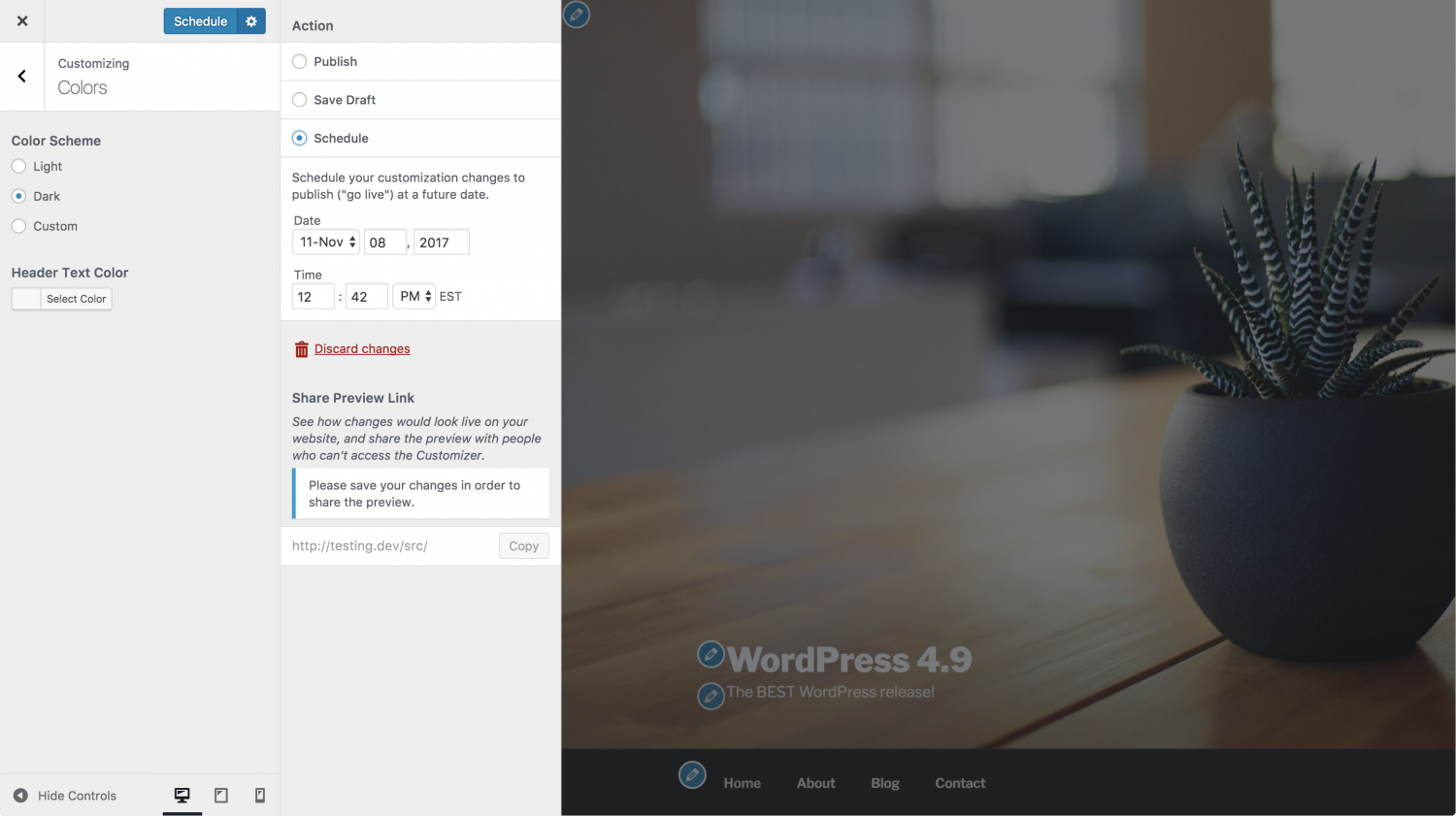 This release also brings the ability to search, browse, and preview themes directly in the Customizer. The search interface includes filters for subject, features, and layout, just like the ones on the “Add Themes” screen in wp-admin. It does not yet include the featured, popular, latest, or favorites tabs, so users will need to navigate back to the admin if they want to browse those categories.

The menu creation process has also been updated in the Customizer to be less confusing with a rethink of the UI and revised copy.

Syntax Highlighting and Error Checking Added to the Code Editors

WordPress 4.9 brings syntax highlighting, linting, and auto-completion to the built-in code editors by incorporating the CodeMirror library. These long-awaited improvements are now available in the theme and plugin editors as well as the custom HTML widget and additional CSS box in the Customizer. The feature comes with prominent warnings about directly editing themes and plugins and protection against saving code that would cause a fatal error. 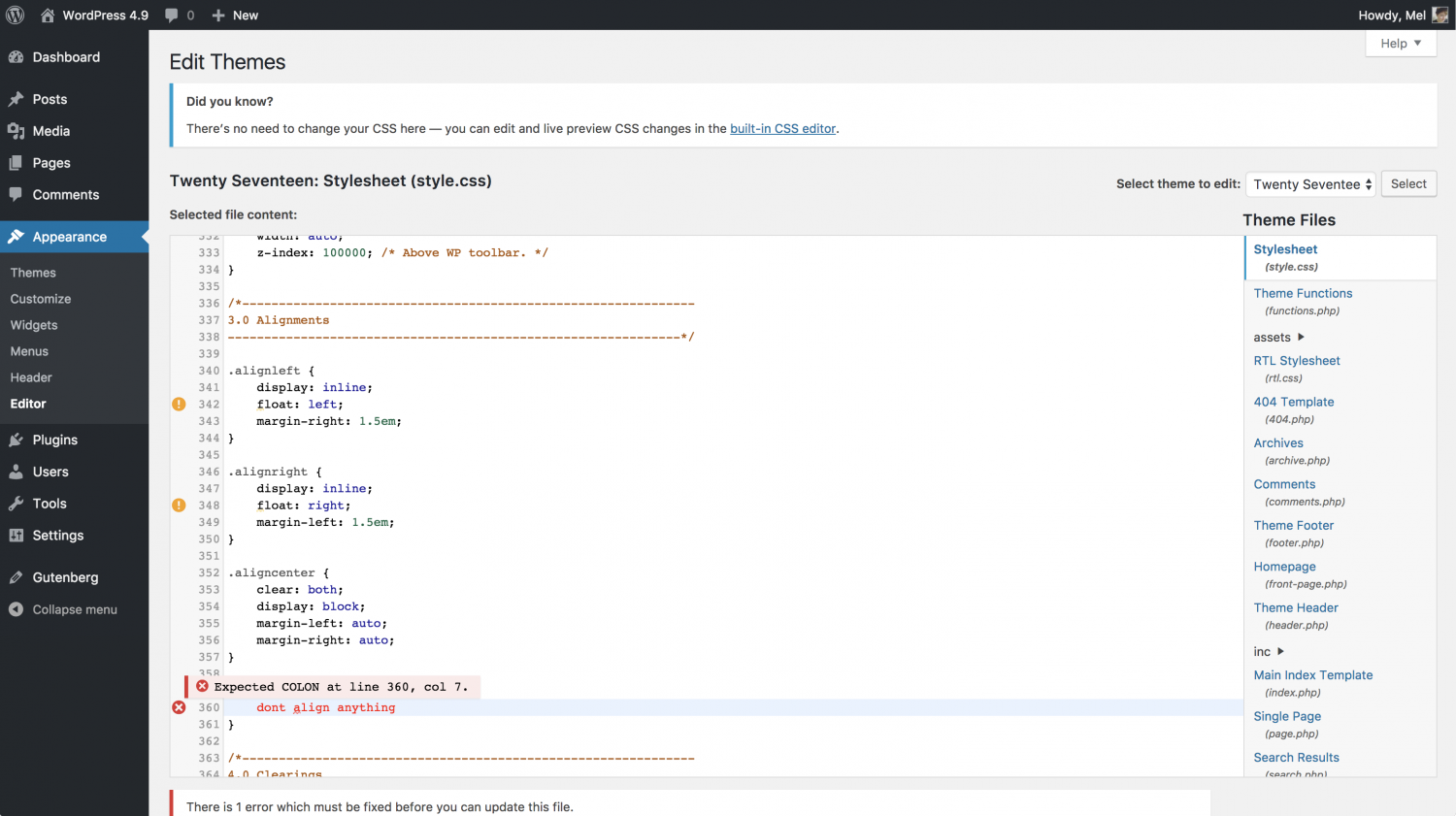 WordPress 4.9 adds a new gallery widget to the collection of core media widgets (audio, image, and video) that were introduced in 4.8. It brings the same gallery-creation features to widgets that have long been available in the post and page editors.

These incremental changes will help users get ready for Gutenberg’s block-based interface. The plan is to eventually transition widgets over to blocks after Gutenberg is in core and the plugin already has support for a gallery block, as well as a Custom HTML block.

As of 4.9, users can now embed media in the Text widget, including images, video, and audio by clicking the “Add Media” button. In order to make this possible, WordPress contributors also needed to add shortcode support to widgets, a feature that users have requested for nearly a decade. With this now built into core, hundreds of thousands of WordPress sites will no longer need additional code from plugins and themes to use shortcodes in widgets.

Widgets have also been improved to offer a better migration experience with updated logic for mapping widgets between two themes’ widget areas.

WordPress 4.9 also includes a notice in the about.php page of the admin, inviting users to help test or contribute to Gutenberg. It is the first time a feature plugin has been highlighted so prominently on the page users see after they update to the latest version.

The Gutenberg project has been getting a lot of attention over the past few months as the WordPress community looks ahead to the 5.0 release that will introduce the new editor to the world. Meanwhile, contributors to 4.9 have been working in tandem to make significant improvements to existing features, enabling users to do more with widgets and overall site design than ever before. This release was led by Weston Ruter and Mel Choyce with help from 443 contributors, 42% (185) of them contributing to WordPress for the first time.