The third official WordCamp Paris was held this past weekend, featuring 15 talks and seven workshops during Jan 17-18. From all accounts it seems to have been a stellar event. The first day focused on business and enterprise and the second day included a mix of talks and workshops focused on tech, design and community topics.

All of the WordCamps that we’ve attended and reported on have been held in English, so I got in touch with Jenny Beaumont to see if she could give us an inside look into WordCamp Paris. 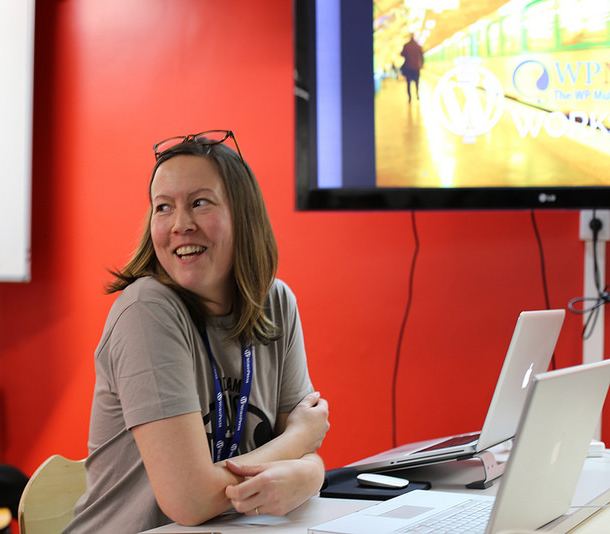 Beaumont came to France in 1998 where she began her career in the web. She now lives in rural Normandy and works as a freelance front-end developer specializing in WordPress.

While most of the sessions were given in French, a handful of presentations were in English. WordCamp Paris featured an impressive variety of topics, including challenges for WordPress agencies, pricing a WordPress site, multisite and multilingual case studies, e-commerce, interface design and much more.

Beaumont attended 10 of the 23 conferences and workshops and said that two sessions were particularly outstanding. “There were a lot of interesting topics presented, including a round table debate about the world of theming,” she said. “But for me, two sessions really stood out above the rest: Caspar Hübinger‘s presentation “The Multilingual Blogging Software Dilemma (and ways to solve it)“, and Julio Potier‘s “Diving into WordPress Hooks” (rough translation). They were both tight, incredibly funny and very well delivered.”

Workshops: An Alternative to Contributor Days

WordCamp Paris is unique in that the organizers have opted for facilitating workshops instead of hosting a contributor day. These are small sessions where Beaumont says everyone is encouraged to get into the nitty-gritty of subjects like hooks, multilingual publishing, SEO, the why and how of creating plugins and working with advanced custom fields. “I think we’re seeing what other WordCamps are, from what I’ve heard,” Beaumont said. “And that’s a clear move from being technically oriented to really addressing all aspects — and all users — of the WordPress ecosystem.” The workshops at WordCamp Paris provided something for users of every level of WordPress expertise.

The French WordPress Community Is Growing

Beaumont attended the last two WordCamps held in Paris and she believes that the French WordPress community is growing in numbers and may expand to host another event outside of Paris.

Although WordCamps have only been held in Paris to date, the French community is taking root in every region of France, and I shouldn’t neglect mentioning our French-speaking neighbors in Belgium and Switzerland who also had a presence. I predict a strong increase in the number of Meetups for 2014 and it wouldn’t surprise me to see a WordCamp pop up outside of Paris in the near future.

Had you asked me that last year I might have responded “fractured and stubborn”, but that is clearly no longer the case. I really feel that something special happened at WordCamp Europe back in October, something that inspired a momentum that we’re all still riding on today. People are coming together, opening up and crossing divides. There is a ton of creative energy and talent here — what’s been missing is the true spirit of giving and sharing, of community! That is shifting and it’s exciting to be a part of it.

It’s good news to hear that WordPress events in Europe are bringing the French WordPress community together in a new way, with more meetups and collaboration on the horizon. For more photos and tweets related to the event, check out the WP Armchair site for WordCamp Paris 2014. If you attended WordCamp Paris, what was your take on the event?