WordCamp Europe was held this weekend in Paris, bringing together 1,900 attendees from 79 countries. Another 1,000 people joined via livestream from 77 countries to make a total audience of 2,900 participants from 92 countries. The number of attendees on the ground was about one third less than original estimates of 3,000, but everyone who wanted a ticket was able to get one. A team of 221 volunteers communicated on Slack behind the scenes to make the event run as smoothly as possible.

The event’s 45 organizers made the presentations more accessible to speakers of different languages with live captioning and real-time audio translation.

WordCamp Europe is the leading WordPress event for catching presentations about the ongoing efforts to bring the software to all the languages of the world. A large percentage of attendees were multi-lingual leaders in WordPress’ translation community, resulting in many presentations and lightning talks focused on topics like communication, internationalization, organizing translation sprints, and using inclusive language for interfaces.

Matt Mullenweg and Om Malik joined the event for a casual Q&A session with attendees wherein Mullenweg showed a demo of the new Gutenberg editor and announced its availability as a plugin on WordPress.org. We’ll cover their comments on the future of the editor and the open web more in-depth in another post. 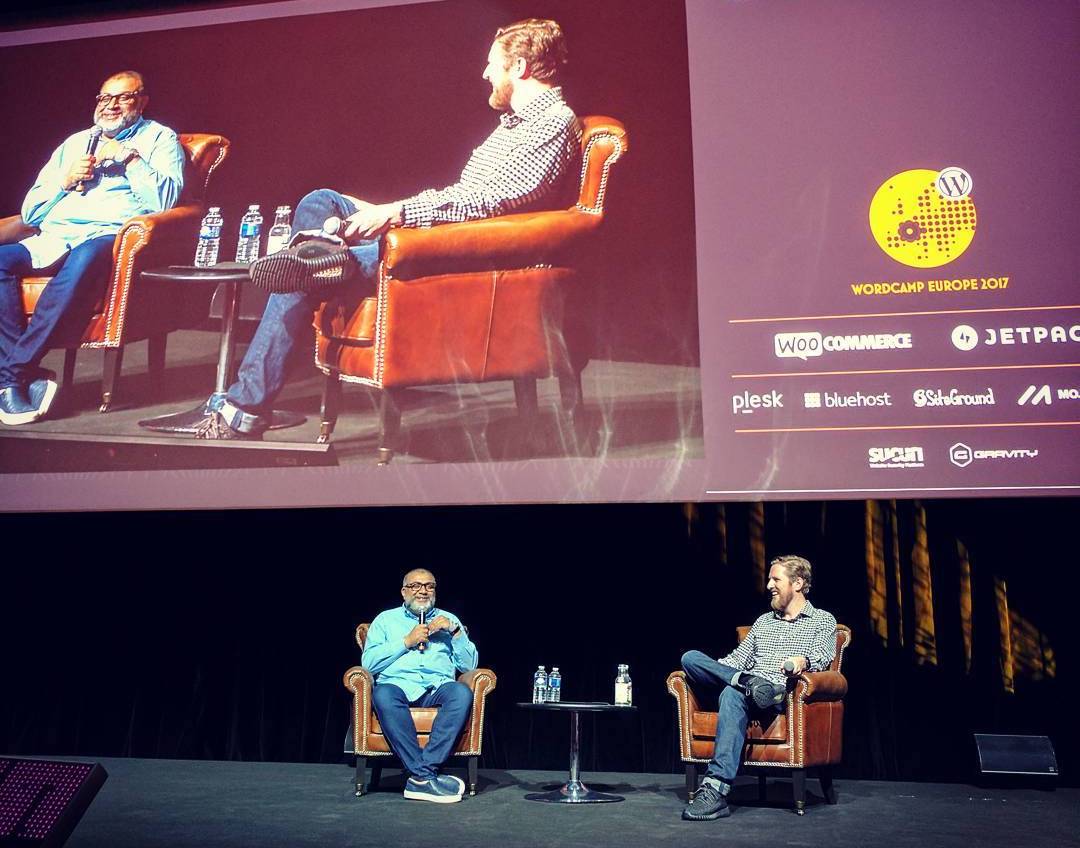 This year’s WordCamp Europe sponsors had space for large 360° booths and the opportunity to be featured in 30-second advertisements between sessions. Organizers also arranged for sponsor workshops with a dedicated space for those who purchased the highest sponsorship levels. These workshops included topics like Creating a WordPress Theme for the Masses, Intro to WooCommerce, Jetpack tips, and hosting product demos.

WordCamp Europe had no shortage of swag unique to the event, including a limited edition French plush Wapuu, posters, postcards, socks, stickers for European WordCamps, and other items for sale in the traveling Swag Store. A giant, stuffed French Wapuu made the rounds, appearing in pictures with attendees.

Contributor Day kicked off the event on Thursday with a strong turnout of 473 attendees. Traditionally, WordCamp contributor days are held on Sunday after the main event, the day following the after party when many who signed up struggle to make it on time – or at all. WordCamp Europe attendees generally appreciated having the contributor day scheduled before the main conference and the higher attendance numbers demonstrate the success of this arrangement.

The after party featured a 1930’s theme at the Pavillon d’Armenonville. Attendees dressed the part and enjoyed a relaxing end to the WordCamp with an evening of dancing and meeting new and old friends.

Organizers anticipate that videos of the presentations will be available next week. We will also be rolling out video interviews with interesting people from the European and global WordPress community in the coming days.